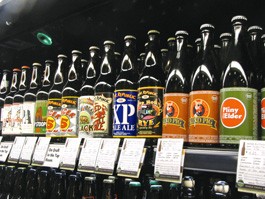 The 411 on area brewpubs and brewers

Wort: Bear Republic was founded in 1995 by Richard R. Norgrove and his family. The brewpub opened in Healdsburg the following year and is best known for its three R’s: Racer 5, a nationally renowned, medal-winning IPA; Red Rocket, a “bastardized” Scottish ale; and Hot Rod Rye, made with 18 percent rye.

Caskage: In addition to 5,000-plus barrels produced at the brewpub, a whopping 25,000 barrels were made at the production facility in Cloverdale. Bear Republic’s beer is distributed in 35 states and internationally.

ABV: Old Baba Yaga, one of many specialty beers, tops the ABV chart at 11.5 percent, but is only sporadically offered at the brewpub. Big Bear Black, a Russian imperial stout with 8.1 percent ABV, can be found on a regular basis nationwide. Bear Republic won two national competitions at the 2010 Great American Beer Festival.

Wort: Dempsey’s is now the oldest brewery in Sonoma County, having been founded in 1991 by Peter and Bernadette Burrell. Far beyond being a brewery, Dempsey’s shines as a restaurant. Fresh, local ingredients are used to create a quality menu far above the usual pub grub.

Caskage: Five hundred barrels of beer were made this year, with Red Rooster and the local favorite, Petaluma Strong Ale, composing about 30 percent. Though most beers are only available in-house, Dempsey’s bottles both Red Rooster and PSA for sale in local markets.

ABV: The cock of the walk, Red Rooster, has a bantam weight of 6 percent ABV, while the seasonal barley wine weighs in between 11 and 12 percent. In 2009, Dempsey’s pilsner won a gold medal at the Great American Beer Fest in Lallemand’s “Brain of Brewers” competition.

Caskage: Keeping house production very small at some 100-plus barrels a year, Hopmonk stresses that they are more about presenting a wide range of local and international brews than brewing many of their own.

ABV: Hopmonk offers three house-made beers which all have an ABV ranging in the mid-fives. The house specialty is the Hopmonk Kellerbier, a German-style lager. The vast selection of other beers offered runs the ABV gamut, topping out at 12 percent. Come November, a new Hopmonk will be opening in the town of Sonoma, three blocks off the square. Hopmonk Sonoma will boast a beer garden with a fire ring, fountains and a stage for acoustic music.

Wort: Founded in 1993, Lagunitas specializes in crafting a wide variety of maverick beers. Owner Tony Magee composes recipes much like musical counterpoint, combining the melodies of hops, yeast, water and wheat into a beer that sings.

Caskage: Lagunitas has released approximately 100,000 barrels of beer this year, with its Northern California’s bestselling IPA accounting for about 57,420 of said barrels. Seven other beers are offered year-round, including Hop Stoopid Pale Ale. Nine seasonal beers enter the rotation to keep things interesting but not too chaotic.

ABV: While Lagunitas IPA weighs in with an ABV of 6.2 percent, the brewery’s Old Gnarly Wine, a winter favorite, boasts almost twice that at 12 percent. With autumn comes a Little Sumpin’ Wild, a golden Belgian ale to echo the season’s light.

Mash: Lagunitas welcomes a kaleidoscope of characters to its Tap Room and Beer Sanctuary for a pairing of suds and sounds five days a week. Second to its IPA, Lagunitas is best known for its nonconformist style, personified in parties and annual events like the Beer Circus, and of course, the stories that they print on the labels. 1280 N. McDowell Blvd., Petaluma. 707.778.8776.—S.D.

Wort: Since moving out of its Guerneville location in 2004, this pub has specialized in barrel-aged beers and Belgian-style ales. Owners Vinnie and Natalie Cilurzo bought the brewery when founders Korbel Champagne Cellars left the beer business in 2002.

Caskage: The brewery puts out 310,000 gallons, with every variety available on tap. While only six brews are bottled—Blind Pig, Pliny the Elder, Damnation, Redemption, Supplication and Consecration—to-go growlers are the same price as a pitcher.

ABV: Brewmaster Vinnie Cilurzo was granted the prestigious Russell Schehrer Award for Innovation in Craft Brewing in 2008. Esteemed for Pliny the Elder, a double IPA at 8 percent ABV, the volume gets kicked up with a 10 percent ABV dark ale aged in a cabernet barrel called Consecration.

Wort: This Irish pub has been brewing pilsners and ales in giant copper tanks since 2002, when owners Mike and Mary Ann Brigham named their artisan watering hole after Mike’s grandmother.

Caskage: Some 14,400 gallons of suds flow from Ruth McGowan’s tanks every year. Bottling for retail should begin next year.ABV: Their KONG Brown Ale is spelled with all-caps for a reason—a few pints at 8.2 percent ABV can hit like a sledgehammer.

Mash: The Cloverdale Ale is a balanced delight with a sweet flavor and a hop kick, and it matches the historic photos and signs on the walls honoring this small town’s past. 131 E. First St., Cloverdale. 707.894.9610.—G.M.

Caskage: Selling only draft, Sonoma Springs produces some 350 barrels a year. “You can’t find our bottles anywhere except here when I do them,” Goeppinger says. “Distribution is tough,” he laughs, “because I’m the brewer and the guy who delivers the kegs.”

ABV: Inspired by Russian River Brewing Co.’s monster hit Pliny the Elder, Goeppinger does Little Chief, a 8 percent ABV strong pale ale. Sonoma Springs specializes in Weissbier, a white or wheat beer, and for the fall has the Noma Weiss at 6.5 percent ABV and the Noma Coma, a malty double IPA that clocks in at a strong 8.5 ABV.

Mash: Artisan’s Bakery is next door and hungry sudsers can purchase food there and bring it in to enjoy with their brew. Shiso Japanese brings their catering truck in on Thursdays for fresh sushi. 750 W. Napa St., Sonoma. 707.938.7422.—G.G.

Wort: This cash-only spot overlooking the Russian River accepts cash only for its rotating selection of cash-only beers and cash-only grub. Remember: cash only!

Caskage: Stumptown’s tanks create 6,510 gallons of beer annually, all of it sold on-site for consumption in the back-deck beer garden.

ABV: With a rotating selection, in-house beers on tap range from the calm Bushwacker Wheat Beer (4 percent ABV) to the fierce Bootlegger IPA (7.2). Signature ale is the Rat Bastard Pale Ale, one of the brewery’s first beers, coming in at just under 6 percent.

Wort: Founded in 1996, the brewery has such a range of beers and a committed clientele that only five brews—the Annadel Pale Ale, the Bodega Head IPA, the American Wheat, the Blarney Sister’s Dry Irish Stout and Stonefly Oatmeal Stout—are a guaranteed find.

Caskage: Aleworks brews 40,000 gallons a year. All its varieties are available at one time or another at the Third Street brewpub.

ABV: Two beers, the Stonefly Oatmeal Stout and the Puddlejumper Pale Ale, have earned a bronze at the Great American Beer Fest. The Oktoberfest Märzen should be on tap any day now.

ABV: The Drum’s most popular beer, the IPA, hits a 7.2 ABV ceiling that all others look up to. The “American-Style” Wheat lays low at 4.1, with pale ales, bocks and lagers in the 6 to 7 percent ABV range.

Wort: Opened in 2004, the pub delivers food and beer to events in a retired emergency vehicle known as the Ambrewlance. All food and beer are available to go.

ABV: Casey Jones Imperial IPA, a brew with pepper, floral and citrus notes, is its strongest beer at 8 percent ABV. The Fairfax Coffee Porter is infused with real coffee. The current seasonal beer is Iron Spring’s Oktoberfest brew, which comes in at 7 percent ABV.

Wort: Founded in 1989, Marin Brewing Co. brews all of its beers onsite. The ingredients used in these beers are all-natural and do not have any fillers.

Caskage: Some 83,700 gallons of beer are produced every year.

Wort: Founded in 1995, Moylan’s is the sister to Marin Brewing Co.

Wort: Founded in 1992, Downtown Joe’s is, according to brewmaster Colin Kaminski, a “European-style pub.”

Caskage: Some 750 barrels of beer a year squeeze through the brewery.

ABV: The Double Secret Probation IPA clocks in at a walloping 9.1 percent ABV. “That,” Kaminski says, “is a big seller.” Other popular brews include their Tail Waggin’ Amber Ale (5.4) and the Tantric IPA (6.5).

Wort: Founded in 1987 by the Calistoga Inn, NVB’s most popular beer depends on the time of year. In winter, their Red Ale is a crowd pleaser.

Caskage: Some 13,950 gallons are brewed annually.

ABV: Described as “big, bold, hoppy,” Barleywine is 10 percent ABV. Their “hand-drawn” beers are available only on site.

Caskage: Silverado releases around 13,000 gallons of its traditional and seasonal beers every year, which are all available daily.

ABV: Always on tap, Silverado’s amber ale is the strongest, ranging between 5.6 and 6.2 percent ABV. Its most popular beer is the “certifiably” blonde ale, which is made with certified-organic malts.