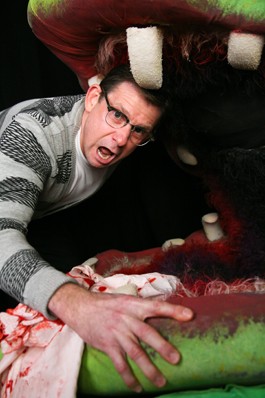 David Lear is one of the more visual, actor-friendly directors working in Sonoma County (witness his sensational five-person Macbeth last November). So when it was announced that he’d be directing Little Shop of Horrors for the Sixth Street Playhouse, marking his first time helming a musical, we knew the show would at least be interesting. At one point, there were rumors circulating that Lear was planning an all black-and-white production to honor the low-budget horror-movie roots (so to speak) of the play’s original inspiration. That idea, evidently, was buried somewhere along the way, but it hardly matters. There is still plenty of satisfying visual invention onstage in this tight, funny, effective and surprisingly emotional production, which features a superb cast, some fine vocal work (when we could hear it; see below) and, under the musical direction of Linda Levine, one of the best onstage bands ever seen on Sixth Street.

Little Shop, with first-rate music and lyrics by The Little Mermaid‘s Alan Menken and the late Howard Ashman, tells the story of Seymour (an excellent Michael Van Why, above), a schlebby loser and Skid Row florist who stumbles upon a mysterious plant that brings him botanical success after he learns that it only thrives on human blood. As Audrey, the self-destructive love of Seymour’s life, Katie Kelley (who has literally grown up on local stages) comes into her own with a rich, powerfully sung, dramatically grounded performance capable of inciting laughs and breaking hearts, both of which she does here. Argo Thompson also lets loose with a series of hilarious ensemble performances, from a gay flower lover with a thing for “strange and unusual plants,” to the sadistic dentist who becomes the plant’s first snack. And speaking of the plant, Audrey II—Seymour names the beastie after Audrey—is a kitschy wonder, a growing, growling anti-Muppet voiced by Joe Hullinger and operated with surprising dexterity and sense of character by Wendell Wilson.

Lear scores again with his use of Emily Sanford, Ali Miller and Tika Moon as the doo-wop Greek chorus that narrates the grisly goings on. My one and only complaint is about the inconsistent sound operation, which never managed to bump up the actor’s voices enough to hear the words clearly through an entire song. One suspects this will be corrected as the run continues, and it should be, because a cast this good in a show this brilliantly staged deserves to be seen and heard.