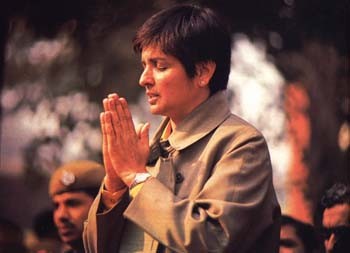 What could possibly make hardened criminals locked up in one of the worst prisons on earth say that they are actually glad to be there? What powerful force could drive violent offenders to weep joyfully and unabashedly? The answer is vipassana, an ancient meditation technique that could unlock the key to true rehabilitation in the world’s prison systems and the subject of the fascinating documentary Doing Time, Doing Vipassana.

A form of Buddhist meditation that emphasizes looking into one’s own mind for the roots of–and solutions to–one’s problems, vipassana literally means to see things as they truly are. During vipassana meditation, a participant is encouraged to focus on the natural inhalation and exhalation of his or her own breath. One’s awareness of physical sensations is eventually heightened to an incredible degree due to the newly discovered focus, and one can begin to see the connection between reactions to outside forces and the physical sensations experienced at the time.

A person can see how reactions can be changed through careful consideration and mindfulness. It is this key element which is said to be the breakthrough for the convicts who practice it. With this realization, they can change their violent and destructive habits, and get started on the path to true rehabilitation.

Doing Time, Doing Vipassana, opening May 27 at Rialto Cinemas Lakeside and the Smith Rafael Film Center, is a brief and direct film that is nothing if not clear-cut. Shot on the cheap, it features a straightforward narration that tells the tale of meditation’s role as a vital rehabilitation technique in India’s violent and overcrowded Tihar Prison. The emphasis of the film is on providing information, not surprising considering that Doing Time is produced by the Vipassana Research Institute.

There are very few moments when viewers gets the sense they are watching a movie; the film often feels more like an instructional video. One notable and effective exception is when filmic techniques are used to show how the distractions of the real world can weigh heavily on the mind of a vipassana practitioner. Quick edits and sped-up camerawork show a barrage of images from food to people to prison cells, while a voiceover explains how clear the mind can become when these distractions are finally dealt with.

But the most potent and convincing elements of the film are the firsthand accounts from prisoners and guards who have adopted the practice. That’s right, the guards, too. Before agreeing to provide his teachings to the inmates at Tihar Prison, vipassana instructor S. N. Goenka insisted that the guards (particularly the most violent and corrupt ones) participate in a 10-day beginning intensive course that features 10 hours of silent meditation per day. Kiran Bedi, the inspector general of Tihar at the time, wholeheartedly agreed and even took part in the course herself.

A three-time murderer tells the story of how he has found inner peace through meditation, seeking forgiveness from the loved ones of those he had killed and becoming a surrogate family member to many of them. A foreign tourist incarcerated for years on an alleged drug charge says he is glad he was sent to prison. But the documentary astutely and realistically does not show meditation to be an instantaneous solution that turns everyone into a saint; in the film, prisoners discuss how difficult it can be to muster the mental effort required to adhere to their newfound insights.

Yet the remarkable success of the Tihar program, now host to a permanent vipassana center, remains a powerful tool of persuasion to other prisons around the world that might be considering adopting this ideal, including San Quentin. With the technique already being implemented in a few key prisons in the United States and a three-year study currently endorsed and funded by the U.S. National Institutes of Health, this positive reform may one day be instituted in all our prisons.

Vipassana is even endorsed by Rivers Cuomo, the eccentric frontman for the rock group Weezer, so perhaps a full-fledged fad is not far off. Imagine a world where the latest trend across Hollywood involves 10 days of forced silence–now that’s true bliss.