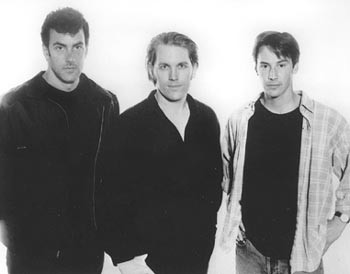 On the Bright Side

In defense of Dogstar

DON’T TELL the fans who are traveling to Petaluma from throughout the known universe that Dogstar isn’t quite stellar. Don’t quip that Keanu Reeves’ grunge band (in which he plays bass) is more dog than star. And don’t jibe that the star of The Matrix, Point Break, and Bill and Ted’s Excellent Adventure is no more a bass player than he is an actor.

No, these fans say Dogstar is amazing. That’s their story, and they’re sticking to it.

And they’re turning out in force for his upcoming Sonoma County appearance. Reeves, who’s been busy in the East Bay for the past few months filming two sequels to The Matrix, is heading to the North Bay on June 24 to play a show at the Sonoma-Marin Fair in Petaluma.

Dogstar has a reputation for being a vanity project, a mediocre band that gets far more than its fair share of attention because of its famous bass player. And by almost all accounts, the band was horrible when it started–much as most garage bands are horrible when they first begin playing in public.

But, of course, most garage bands don’t get to play the kind of venues Dogstar got to play right off the bat, nor do they get written up by the press at an early and unseasoned stage in their careers. On the other hand, most garage bands would give their eyeteeth for the opportunity.

It all started back in 1991 when Reeves saw a guy at a L.A. supermarket wearing a Detroit Redwings hockey sweater. A big hockey fan, and the goalie on his high school team, Reeves started a conversation with Rob Mailhouse, and the two ended up becoming friends. They liked to play music, and buddy Bret Domrose actually had some experience performing as a member of the San Francisco band the Nuns and then later touring as Sheryl Crow’s guitarist.

The three guys started hanging out, drinking beers, playing some Grateful Dead tunes and some old-time rock and roll, writing their own songs, and drinking some more beers. Eventually they figured they might as well go out and play some gigs.

Since those early days when Dogstar’s reputation was formed, it seems the musicians have been gaining experience and respect. In one telling show in England a couple of years ago, soon after the concert started the audience began pelting the band with fruits and other edibles. But Dogstar continued playing, good-naturedly dodging the flying food. By the end of the performance, the pacified masses were swaying to the music.

Whatever their appeal may be, musical or otherwise, Dogstar draws in the fans. Sonoma-Marin Fair coordinators have been receiving e-mails from people in Japan, Switzerland, Italy, and elsewhere who are flying over specifically for the concert and need further information about Petaluma.

AFTER ALL that trouble, let’s hope the folks from Europe find some good spots from which to view the show. There’s plenty of competition. Another group of fans is planning on arriving early in the morning at the fairgrounds and waiting for the front gates to open at noon. Then they’ll head over to the bandstand and find spots directly in front of the stage–and wait there until the band comes out six hours later.

Sharon Phillips, a 38-year-old fan from the East Bay who plans on making a day of it, says she knows people must see them hanging out hours before the show and “they probably think we’re pitiful. But what can I say? We have a lot of fun.”

Phillips, who co-hosts the website KeanuReevesA-Z.net, is part of an online community of Reeves/Dogstar fans. These women, many in their late 20s and 30s, say they enjoy bantering back and forth on the message boards about Reeves and the guys. But it’s actually the friendships and camaraderie that keep them involved in the community.

In fact, they’ve become so close over the Internet that four of Phillips’ online friends–women from Sweden, Italy, England, and Minnesota–are currently spending their vacations at her home. This is the first time the four have met face to face, and they will all be attending the concert together.

Is Phillips’ husband of 16 years, Mark, jealous of his wife’s obsession with Reeves? “No, not at all,” Mark says. “I’d have a problem if she were drooling over my best friend or something. But if she’s hot over an icon, that’s fine.”

Not only is Mark, 38, not jealous–he even helps his wife out on her many excellent adventures. For instance, The Matrix sequels are being filmed close to their home, so when he flies his private plane to work in Palo Alto, he’ll first take his wife for a quick spin over The Matrix set so she can take some pictures to post on the Internet.

Mark also flew his wife down to L.A. so they could watch Dogstar perform at the House of Blues. Although there were more women than men at the show, he says it was “pretty mellow.”

“I didn’t feel out of place, or anything like that,” Mark explains. “I just hung out back with the rest of the guys and we had some beers while the girls went out in front and did their thing.”