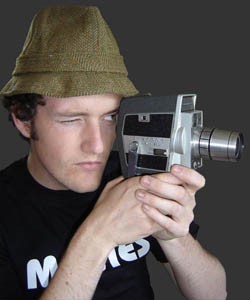 Point and Shoot: Daniel Walker aims to please–as long as the result is fairly ridiculous.

Excuse2Realize coming to a living room near you

Glen Stewart and Daniel Walker of the Santa Rosa comedy group Excuse2Realize prefer to describe themselves as “people who make movies,” eschewing the title “filmmaker” and all the pomp it implies. They have never had formal training or attended film school, nor do they work from scripts or, for that matter, shoot on actual production sets.

Stewart and Walker’s no-budget, high-concept comedy has all the homemade charm of late-night community access, but with more wit and no drone. “Really, we’re only making films to make friends,” Stewart deadpans, “and then once we have enough friends individually, we’ll split up and we won’t talk to each other ever again.”

Whatever their motive, Excuse2Realize, a troupe often augmented by Stewart’s wife, Alycia, and the perpetually silent Jef Overn, are on a roll. Their renegade word-of-mouth premieres attract dozens of people, who pack like sardines into private living rooms to drink 40s and watch their work. The self-released DVD, a collection of short movies and spoof commercials, is set for a second run after literally being sold out of backpacks on the street.

Necessity being the mother of direction, Stewart and Walker started making movies simply because they were broke. “Daniel and I were both jobless and living in this apartment, drinking a lot, just totally depressed and not being creative,” explains Stewart. “Christmas was coming up and we had no money to get our families anything. So we decided what we could do is to make a movie, put it on VHS tape and send it to them as presents.”

Thus the group’s first short, Realmas, was born–hatched in one night, completed in a week. Walker spent Christmas night editing the film on his computer. “I thought, ‘It could be depressing right now that I’m not around family and friends,'” he recalls, “‘but this is kind of better.'”

In Soft Porn‘s best short, “Resurrect the Rabbit,” a self-absorbed redneck and a disconnected scientist who share a kooky conspiracy theory team up to find and destroy the Easter Bunny. Sacred Indian grounds are trespassed, busy streets picketed and centuries of Christian history blasphemed.

Avid thrift-store shoppers, Stewart and Walker started collecting marketing videocassettes from the 1990s of companies advertising, among other things, pyramid schemes, and inspiration struck. “They had horrible soundtracks, bad actors, and you knew right away that they’d be pitching some really bad financial decision,” explains Stewart, whose apartment is a clutter of unique thrift-store finds. “They all looked really cheesy and low-budget, so we were going for that sort of look.

“Angela Lansbury has one where she does yoga,” he continues. “It’s called, like, Positive . . .”

Anyone can find weird crap at the thrift store, but Excuse2Realize’s reappropriation of the marketing-video look for their own needs is a smart, artistic form of cultural renewal. It’s using the past as validation to poke fun at the present. Plus, it’s affordable.

Despite their continued lack of funds, the troupe still find inspiration knocking. They assure fans that more holiday-themed spoofs are on the drawing board (“We’re gonna do Independence Day for sure,” says Stewart), but currently they’re working on a hush-hush project.

“I can’t give away the premise,” sighs Stewart, “but I can tell you that it’s going to be retarded.”