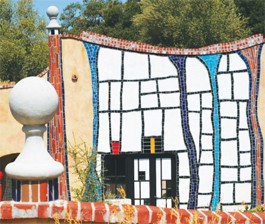 If it weren’t for its appointment-only policy, Napa’s new Quixote Winery would be a mob scene. The day after it opened this February, the New York Times featured it in the Sunday edition. When the winery staff came to work on Monday, 269 e-mails awaited them.

Some three months after this hubbub began, a crowd of landscape-architecture students meandered over the winery’s grounds while Lew Price, the general manager, led a smaller group of visitors on an official tour and tasting. Clustered together on an uneven brick walkway, the group listened to Price as he debriefed them about the winery, which was designed by the late Austrian artist Friedensreich Hundertwasser.

While the group absorbed their Candyland-like surroundings, Price explained that to Hundertwasser, the straight line was humanity’s worst enemy. He went on to say that in designing the whimsical mosaics covering Quixote’s surface, Hundertwasser may have looked to Catalan madman Antoni Gaudí for inspiration. Impressed–and possibly hoping to impress–one visitor suggested that perhaps French sculptor Jean Dubuffet had also been an influence. Price, who only started working at Quixote a few months prior, politely said he didn’t know about that.

A painter and a sculptor rather than an architect, Hundertwasser nevertheless designed a respectable number of wildly unique buildings during his lifetime (he died in 2000 at age 71) and developed an ardent following. Many of his buildings served rather humble purposes: public housing in Vienna and an incinerator in Osaka, for example. Price even told the group that Hundertwasser had refurbished a public toilet in New Zealand, but so many fans had flocked to see the facility that it had backup problems. For a different reason, Price seemed relieved to report that the number of “Hundertwasser people” visiting Quixote, the designer’s only U.S. building, was finally starting to abate. “They think the floor’s too flat,” said Price, looking ever so slightly scandalized.

Quixote’s owner, Carl Doumani, saw Hundertwasser’s designs for the first time on a calendar while visiting a San Francisco architectural firm during the late 1980s. One of the qualities that struck Doumani about Hundertwasser’s buildings was that they were so “human.” Some 10 years later, human was what he got with Quixote. It’s a castle on an almost kid-like scale, and because Hundertwasser abominated straight lines (he thought it was unnatural for humans to interact with them), Quixote practically giggles with squiggles.

A few days after the tour, Doumani greeted a visitor at the winery. Although it was only May, everything about Doumani was already summer-weight, from his snowy hair to his matching pants and creamsicle-colored short sleeves. He sat behind his desk in the squat rotunda under Hundertwasser’s signature dome, a golden fairy tale of an affair. This privileged position gave the impression that Doumani, for all his judiciousness, might have a bit of a despotic streak. In fact, the San Francisco Chronicle once reported on his reputation as “Ayatollah Doumani.” But for all that, Doumani is awfully approachable. He even does a lot of his own scheduling, painstakingly filling in a large desk calendar with tiny block letters.

At his visitor’s request, Doumani attempted to articulate his famously disparate aesthetic taste by pulling a few volumes on some of his favorite artists and architects from two large bookshelves in an adjacent room.

“Excuse me,” he said through the doorway. “I just remembered the best. Oh God, I just bought this damn book! I didn’t remember I had it. This guy–OK. I’m sorry,” he said, returning with a book on the late Italian designer Carlo Scarpa.

As Doumani flipped through the pages, he remarked on Scarpa’s precise shapes of shadow and light. “His detailing,” he said, “it’s kind of classic, but really imaginative.”

The visitor pointed out that this was totally different from Hundertwasser. “Well, yeah, that’s the point,” Doumani replied crisply.

Maybe it had been a mistake to try to pinpoint Doumani’s aesthetic taste with this exercise. Scarpa’s monochromatic tomb with its careful geometric shapes couldn’t have contradicted Hundertwasser’s improvisation any more. Hundertwasser had even gone so far as to smash a custom-made column one day, after it had been imported all the way from Germany and safely installed at Quixote. Apparently, the column had been too perfect.

(To complicate matters of understanding Doumani’s taste even more, he is currently working with the slick, industro-chic New York architects Tod Williams and Billie Tsien to design his private guest house.)

Still flipping through the book, Doumani revealed the key to his architectural tastes, more consistent than they had first appeared. He simply has a great capacity for appreciating wildly divergent brands of creativity–as long as they’re exciting and suit the site.

“Hundertwasser gets exuberant and organic and lyrical with [design], and [Scarpa] does this in a much more refined, much more sophisticated . . .” Here, Doumani trailed off, pausing at a modernist Scarpa mausoleum. “Too bad you have to die to go in here.”

A gust of entrepreneurial spirit tugged Doumani at the tender age of 20 while he was still an undergraduate studying business at UCLA. The owner of the barbecue joint where Doumani worked decided to sell his restaurant, and Doumani made a $200 down payment on it.

While Doumani was busy starting a career as a restaurateur and California property developer, Hundertwasser was a continent away, enjoying an ur-bohemian lifestyle and writing a treatise on why architects shouldn’t preoccupy themselves with rationalism. He changed his name from Freidrich Stowasser to Friedensreich Regentag Dunkelbunt Hundertwasser, which means something to the effect of “peaceland-rainy day-darkly multicolored-hundred-water.” The peculiar artist primarily wore wooden clogs and was often capped in a beret. But sometimes, he didn’t wear anything at all, even while lecturing.

It took Doumani a year to track Hundertwasser down, and they finally met in 1989, to discuss building Quixote next door to Stags Leap Winery, which Doumani founded in 1972 but had since sold to Beringer Wine Estates. They broke ground in 1991, and over the next several years, Hundertwasser corresponded with Doumani through petulant memos penned by his manager, Joram Harel. The flatness of the floors was indeed broached, Harel instructing, “A further crucial and vital matter is the fact that all floors which have no specific use like offices or for technical reasons, or public areas, entrances, doors, will have to be irregular, smooth, wavy floors. It is a sensational revolutionary improvement for the well being of men walking on earth. He recovers his mental equilibrium, a wavy floor is like a melody, like a symphony for the feet, extending to the soul. You may be the first in the United States to introduce and to enjoy these unique proven humanization and experience.”

Although Quixote didn’t open to the public until this year, the building was completed in 1998. Fortunately, Hundertwasser got to see it in its finished form, minus some of the landscaping, before he died. Doumani didn’t go to the funeral and still refers to Hundertwasser in the present tense.

Quixote is built into a hilltop and Hundertwasser insisted that the roof be topped with sod and planted with greenery. He didn’t care what kind, as long as it blended in with the surroundings. He just hoped that if you were looking at the winery from above, you wouldn’t notice it. He clearly wasn’t thinking about the golden dome, which sticks out like a little sun.

Mounting a dirt incline on the side of the building, one comes face to golden face with this dome. The shadows of rainwater rivulets don’t take away much of its sheen. One can walk along the modest brick parapets–wavy, of course–and peer over one side to see a cozy courtyard laid with white and blue tile. Indeed, this is a castle on a human scale, and instead of dumbfounded awe, a sympathetic “Aw” is in order.

According to Doumani, Hundertwasser once promised him that his life would change when he worked under the onion dome.

“My answer,” Doumani joked, “to him was, ‘Friedrich, life is pretty good. Maybe you shouldn’t fool around with changing it.’ And, who knows.”

Quixote offers tours that include winetasting along with crackers and cheese scattered Hundertwasser-fashion across the plate. 6126 Silverado Trail, Napa. $25. To arrange, call 707.944.2659, or e-mail [email protected]