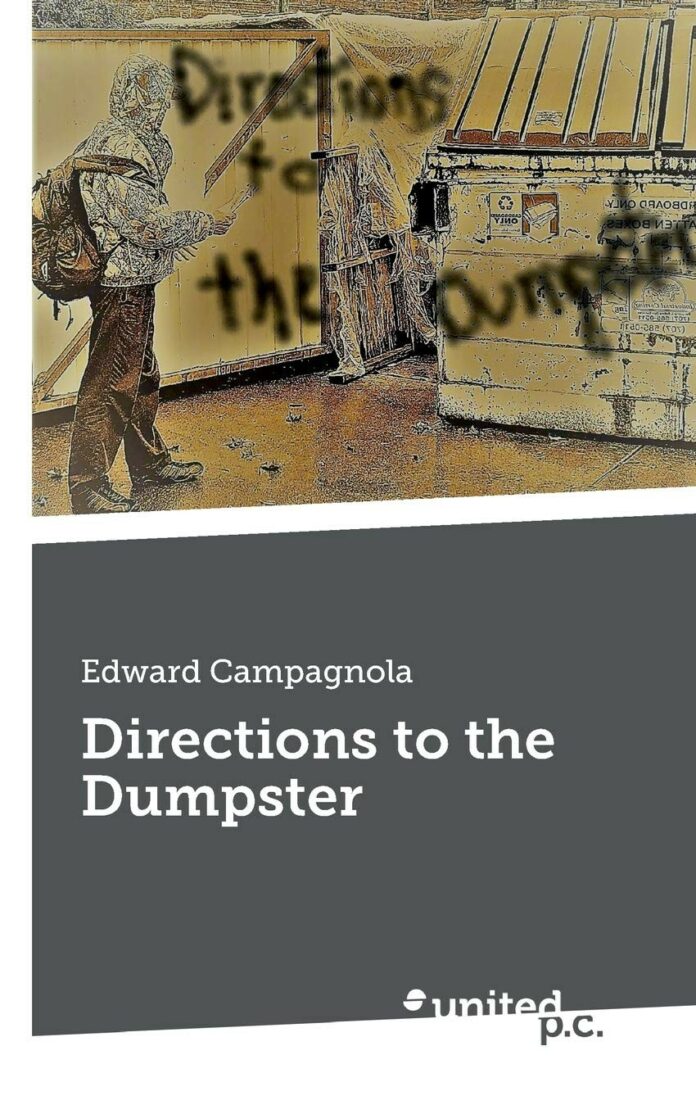 Edward Campagnola has a story to tell. Currently living as an unsheltered resident in Sonoma County, he spent the last five years writing his story, and last year he released his debut novel, Directions to the Dumpster.

Now available on Amazon.com, the book traces Campagnola’s journey in homelessness and his attempts to get out of it. It is also a story that aims to dispel preconceptions about homelessness and end the stigma associated with it through a campaign of awareness and compassion.

“I’ve been in a cave really for five years,” Campagnola says. “You’re lucky if you have a phone, you know what day it is. I would lose days if I didn’t have a phone, but having it is a security risk.”

This glimpse into Campagnola’s daily experience is one of the book’s many details that dissolves the reader’s veil of ignorance and exposes them to the reality of what unsheltered residents go through day to day.

The title of the book, Directions to the Dumpster, is a phrase Campagnola uses literally and figuratively. He argues that in a capitalist society, the homeless are seen as worthless, while they also are often given directions to the dumpster when they do reach out and ask for help.

“I originally titled the book Going to California, a la the Zep tune,” Campagnola says.

Originally from New Jersey, Campagnola traveled to New Orleans, Houston and Las Vegas after the death of his wife.

“I was soul-searching at the time,” he says.

At one point in his travels he suffered a violent, random attack on a California-bound Greyhound bus that left him with PTSD. When he arrived in Sonoma County, words began to pour out of him.

“It was unbelievable, and I don’t know if it was from the attack, but phrases just started flowing out of me,” Campagnola says.

Collecting those phrases in notebooks, Campagnola wrote his manuscript on a Sonoma County Library computer. He wrote the novel as a form of therapy, as a way to reconnect with his adult children and to give society a better understanding of homelessness in America.

Campagnola describes his book as a documentary-style narrative, detailing events as they occurred and letting the reader make their own personal connection.

“I did not bother to express what my feelings were,” he says. “Except for the moment when I talk about a handwritten letter from my wife that I lost—I was more distraught than any point in my life.”

Though Campagnola secured a publishing contract, the book is an entirely DIY experience, with Campagnola editing and promoting the book on his own. The road to publishing was a long one, but he’s ready to do it again.

“The book’s a cliffhanger,” Campagnola says. “I’ve already started writing the sequel. I decided the title will be Directions Home.”

‘Directions to the Dumpster’ is available online.