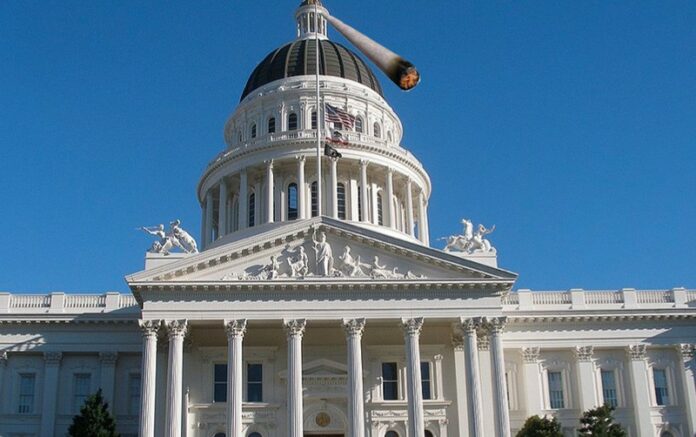 Sacramento goes up in smoke

California has struggled to get its medical cannabis house in order ever since passage of the landmark Compassionate Use Act in 1996. In that time, lawmakers have repeatedly failed to come up with a statewide regulatory regime. The stakes for success are higher this year, given that there’s little chance the state would enact a full-on legalization regime until it squares up the medical regulations. (See related story in Debriefer, “Local Grower Hoedown,” at Bohemian.com.)

With that in mind, here’s the medical lay of the land over in Sacramento: Last December, Oakland assemblyman Rob Bonta offered AB 34. The Emerald Growers Association hailed the grower-friendly bill as “the first cannabis regulatory bill that takes a multi-agency approach.” The leading growers’ lobby supported the bill for its protection of old-timey shadow-growers. “This basic recognition is tremendously important.”

That bill sat around for a while and was only assigned to committee after Bonta emerged as a co-author of AB 266, which effectively superseded his first bill. AB 34 got a 13–0 vote when last heard in the appropriations committee, then it was “held under submission” in that same committee.

While AB 34 languished, AB 266 picked up on last year’s failed bills written by the conservative California League of Cities and the California Police Chiefs Association. AB 266 includes grower-friendly language, and it’s over in the Senate after passing out of the Assembly.

That bill will now be treated to the legislative version of a sativa-indica hybrid. Lawmakers will consider it alongside
SB 643, which sailed out of the Senate on June 4 and is now before the Assembly. SB 643 creates an omnibus regulatory scheme designed to corral the medical cannabis industry, and also comes with an environmentally savvy emphasis on thwarting illegal water diversions and irresponsible outlaw grows. Local shout-out to Sen. Mike McGuire for this bill.

A couple other cannabis bills were offered this session to put some legislative meat on the 1996 medical cannabis law.
AB 243 strengthens existing water regulations for cultivators. The bill requires “best practices related to land conversion, grading, electricity usage, water usage, water quality, woodland and riparian habitat protection, agricultural discharges, and similar matters”—or else: the law will find you. It passed, and is under consideration in the Senate.

Then there was the omnibus reform bill AB 26, which pushed for more laws “in furtherance of the Compassionate Use Act of 1996, which provides for the Legislature to ‘implement a plan for the safe and affordable distribution of marijuana to all patients in medical need of marijuana.'”

The bill went by the wayside as AB 266 emerged as the cannabis du jour bill in the Assembly.

It was smoke-free Sunday at the Sebastopol Grange for the first meeting of the new Sonoma County Growers Association (SCGA) this past weekend. The only thing that got fired up was the imagination of nearly 200 participants as speakers explored the bold new world of legal cannabis.

“There’s been a revolution in the way we talk about cannabis policy in California in the last nine months,” Healdsburg assemblyman Jim Wood told the crowd. Earlier this month the Assembly approved an omnibus bill that protects fragile watersheds—and mom-and-pop cannabis growers. “This was the first time that cannabis has ever been acknowledged as agriculture,” Wood told an approving crowd.

The bill now rests in the Senate, to be merged or otherwise mashed-up with Sen. Mike McGuire’s Medical Marijuana Public Safety and Environmental Protection Act. McGuire pushed for new laws to fulfill a “promise that was made to Californians 20 years ago . . . to put in rules and regulations to protect our community and our environment and help this multibillion dollar industry grow in the years to come.”

The SCGA was created to influence new policies that will affect the livelihood of thousands of small Northern California growers, especially after 2016. “To protect their interests, small family cultivators need to become more active participants in their community,” the group advises. “By organizing and educating themselves, cultivators become involved in the solution.”

Given the continued illegality of cannabis—and Sonoma County District Attorney Jill Ravitch’s decision to aggressively pursue cannabis crimes—none of the attendees was ready to step out of the shadows and identify themselves as cultivators.

One attendee, Laura, said the mere fact of a full house was good enough news for the day. “It’s good people are getting out in the open, and not being afraid anymore.”

There’s other aspects of the legalization push that put the fear to local cannabis growers: the emergence of large-scale cannabis agribusiness that will push prices down so low that small operators will be driven out of business.

This has led cannabis advocacy organizers and dispensary leaders to mobilize around industry groups like the new SCGA and the Emerald Growers Association.

A “Grow Local” future, panelists suggested, would feature a regulatory environment that encouraged mom and pop growers and that emulates the craft-beer industry.

“If you go down the beer aisle at Safeway, about 75 percent of it is taken up by craft microbreweries,” noted panelist Jamie Kerr, a founder of the 530 Collective dispensary. “We could follow the [California] Craft Brewers Association model where you have regulatory requirements that allow for a micro-farmer to still stay viable and compete. You do that through tiered markets and tax breaks”

This could mean access to local farmers markets, the ability to control appellations (think “Dry Creek Valley”), and local regulations that limit large grows. Wood explained that AB 266 places a 30,000-square-foot limit on all cannabis farms—too small to whet a large investor’s appetite.

If voters legalize marijuana, cities or counties eager to attract larger growers might also allow larger farms. Wood is optimistic that, as with fine wine, the expertise of small growers will convince buyers to shop local.

“Hopefully, in the end it’s going to be a recognition for people who use these products that there is a difference in the quality,” he told the approving crowd.