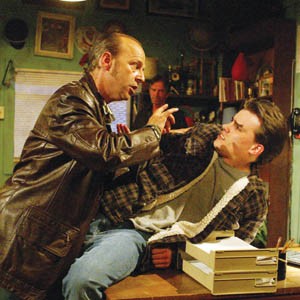 Lives of Desperation: Ken Sonkin, left, and Ben Stowe in the Sonoma County Rep’s 2005 production of ‘American Buffalo.’ Scott Phillips is in the background.

A ticket–be it a ticket to a play, a concert, a movie, a sporting event, a lecture, a festival, a fair or any other form of entertainment–is many things all at once. First of all, a ticket is a commodity, of course, granting its holder passage to whatever entertainment is declared on its glorious card-stocked face. It’s also a promise, a symbol of the potential pleasure that we hope to experience once the event begins. Sometimes the promise is an empty one and we end up going home disappointed at the end of the performance–or in the worst cases, during the intermission (not that I, as a responsible theater reviewer, would ever do that).

But a ticket is even more than that. At the moment when the ticket is torn by some beaming usher, that flap of paper becomes the focus of a lovely, instantaneous ritual, signifying our transformation from “random person on the street” to “certified audience member”; in celebration of this moment, we are ceremoniously presented with the magical paper stub.

After that, for those of us who keep our torn ticket stubs–and I keep every ticket of every kind for every play, movie and concert I see–a stack of stubs also serves as a tangible record of the theater-, movie-, concertgoing activities of the previous months. At the end of each year, I pull my collection of stubs out of the cardboard candy carton in which I keep them arranged according to the date of the event, from first to last, and re-sort them, this time organizing the stubs according to the quality of the experience; my favorite shows go at the top, and my least favorites are at the end.

The sorting itself can be a time-consuming but enlightening project. With 2005’s ticket stubs spread all across my office floor, I came quickly to three obvious conclusions: (1) I go to a lot of shows; (2) 2005 has been a year of exuberant highs and quite a few lows; and (3) I’m a lucky guy.

Some of my most memorable performing-arts experiences, those in which I had some participatory hand or are related to the participants, belong on a different list. I also look back fondly on Something’s Comin’, a musical revue held in a converted suburban garage featuring Kelly Brandeberg and Jeremiah Ginn, whom many of us watched grow up through dozens of roles with the Santa Rosa Players, and who used the home-grown show as a blast-off to college and world travels. Honestly, it was one of my favorite shows of the year.

Personal highlights aside, my official list of favorite shows is proof enough that in the North Bay, one needn’t look far to find first-rate onstage entertainment all year round.

1. ‘American Buffalo’ Jennifer King directed the best show of 2005, Sonoma County Repertory Theater’s intensely intimate staging of David Mamet’s American Buffalo, a tale of low-life crooks in crisis. Starring the unholy trinity of Scott Phillips, Ben Stowe and Ken Sonkin, the pitch-perfect play was one of many strong shows at the Rep in 2005, from Tennessee Williams’ Night of the Iguana in February to Conrad Bishop and Elizabeth Fuller’s original Drake’s Drum in September. In American Buffalo, easily the finest of the lot, something truly remarkable took place, with Sonkin, as the increasingly unstable, ever-twitching burglar Teach, giving one of the most electrifying performances the North Bay has seen in years.

2. ‘Beatbox: A Raparetta’ In early 2005, Cinnabar launched its first-ever hip-hop theater festival, an event that was crowned by a simply staged, one-night performance of a rap operetta (a “raparetta”) called Beatbox. Created and performed by the San Francisco–based artistic collective known as Felonious:onelovehiphop, Beatbox was brought back for a glorious three-week run in October, and Cinnabar pulled out all the stops, giving the show a fully realized set and a creative promotional effort. The remarkably inventive show, starring Dan Wolf, Tommy Shepherd, Carlos Aguirre and others, was a first-rate example of how unconventional theatrical media (rap, hip-hop dance, percussive beatbox sound effects) can be let loose onstage to create something raw, political, vital and excitingly original.

3. & 4 (tie) ‘Splittin’ the Raft’ and ‘River’s End’ The first two plays of Marin Theatre Company’s 2005–2006 season were each world premieres that featured rafts and rivers as central ideas, and were both sensational. I rarely have time to see a show more than once, and I saw both of these twice. River’s End, a musical by Cheryl Coons and Chuck Larkin, tells two simultaneous versions of a true-life mystery/love story, that of the disappearance of river rafting newlyweds Glenn and Bessie Hyde. Splittin’ the Raft is a powerful and entertaining whirligig of a play, melding the story of Huckleberry Finn and the escaped slave Jim with the life story and writings of abolitionist Frederick Douglass. Two great ideas, two rivers, two rafts–one great way to begin a season.

5. ‘My Date with Drew’ Without question my favorite film of 2005, My Date with Drew–a charming and inspiring documentary in which aspiring filmmaker Brian Herzlinger films himself trying to land a date with Drew Barrymore–had its North Bay premiere last April at the Sonoma Valley Film Festival. Soon to be released on video, the film is a glorious celebration of the power of crazy dreams and the guts it takes to make them come true.

6. ‘Rumors’ Santa Rosa Junior College’s gut-busting production of Neil Simon’s low-brow bedroom farce was not exactly classy, but it had enough kinetic energy to power 10 traditional comedies. With a cast willing to risk life and limb to make the audience laugh, Rumors was by far the funniest show of 2005.

7. ‘The Draft’ A production of SSU’s drama department in collaboration with San Francisco performance artist Liebe Wetzel, artistic director of Lunatique Fantastique, The Draft is puppet theater that employs only found objects. Staged under the radar last March, this production employed a team of actors in black garb, manipulating baby blankets, shoes, pots and pans, helmets, newspapers, feather dusters and toy guns, to tell the story of a young man drafted in 1968 and sent to Vietnam. Short and bittersweet, the remarkably moving example of found-object puppetry was a powerful story of love, hope and loss, proving that a skilled group of performers can bring an audience to tears using nothing more than a few props and a truly great story.

8. The Bobs The new wave a cappella group tore holes in the air and nearly set the stage on fire last spring when they took over the Spreckels Performing Arts Center for one night of high-voltage vocal gymnastics. My ears are still vibrating.

9. ‘Beauty and the Beast’ Santa Rosa Junior College’s celebrated Summer Repertory Theater hit a new high with last summer’s mounting of Disney’s Beauty and the Beast, creating one of the most beautiful sets and costume arrays that SRT has ever attempted. The cast took to the job of portraying animated clocks and candelabras with enthusiastic aplomb, Beauty (Jessica Crouch) was appropriately beautiful and strong-voiced, and the Beast (C. J. Dion) performed one of the year’s most beautiful solos, the act one-ending lament “If I Can’t Love Her.” If SRT produced soundtracks of its show, I’d have bought this one.

10. ‘The Santaland Diaries’ Actors Theatre’s brilliant adaptation of David Sedaris’ hilarious monologue about the people who play elves in Macy’s annual Santaland opened in December and runs through Jan. 7. Executive director of Santa Rosa’s Sixth Street Playhouse Argo Thompson has split Sedaris’ one-narrator structure into three, giving us a trio of shell-shocked elves (David Yen, Peter Downey and Ryan Schmidt, all excellent) taking turns describing the pitfalls and pratfalls that come with being a professional Santa’s helper in the busiest department store in America. Jammed with cynical asides and outrageous tales, and smartly directed by Thompson, this is good, unclean, nasty fun. It’s the perfect ending to a year as packed with quirky surprises as 2005 has been, and a great way to usher in 2006.

I’ve now emptied the candy box, and look forward to filling it with a new year’s worth of little paper promises.