Darius Anderson Wants to “Rape and Pillage Other Publications” 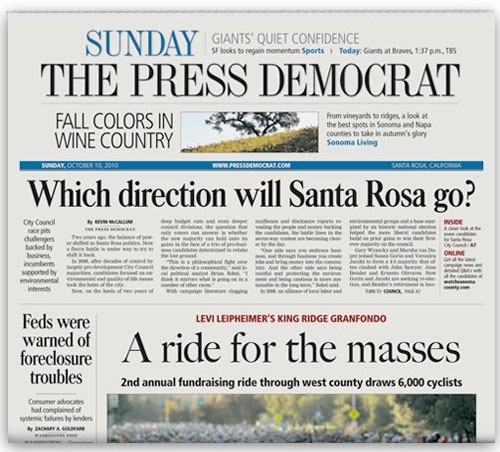 “Anderson said he is not done buying newspapers yet,” the articles reads. “‘We’re coming to a town near you soon,’ he told the room full of fellow newspaper owners. ‘I plan to go to San Francisco and rape and pillage other publications and take their talent and bring it to Santa Rosa.'”

In November, Anderson was one of a team of local investors who bought the Press Democrat.

As we wrote then: “Darius Anderson has a long history as a high-powered lobbyist for companies like PG&E, Station Casinos, Pfizer, Microsoft and Catellus, and has worked for Clint Eastwood and been a fundraiser for Gray Davis. In 2010, Anderson was fined half a million dollars in a corruption probe. He currently wants to build a $30 million boutique hotel off the Sonoma plaza.”

Anderson’s words at the conference were, no doubt, offered in jest. But they have a sinister ring, considering the numerous conflicts-of-interest that could arise from his joint roles as lobbyist and newspaper owner. According to the Sonoma West article, Anderson both “called for a “bigger role” of the newspaper industry in statewide affairs” and “offered himself for a possible run at statewide office in the future.” The piece does report that Anderson declared intentions to put the paper in a non-profit trust if he does run, to “avoid the appearance of any conflicts of interest.”