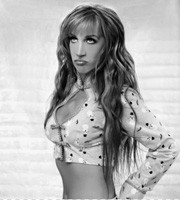 For someone who has made her name by skewering celebrities with nastiness, Kathy Griffin has a dirty secret: she’s actually nice. It’s like finding out that John Bolton secretly thinks the United Nations is a good idea. She doesn’t make a big deal out of it, because her increasingly successful career–despite her contention that she is still D-list–is built on rapid-fire, flawlessly aimed barbs toward those who would keep her where she claims to be. But when you look for the signs of nice, they’re unmistakable.

She’ll be onstage at the Wells Fargo Center for two shows on Jan. 12, during which Bravo will tape her next stand-up comedy show. As a performer, she is more likely to be naughty than nice, but that dichotomy is never far away.

You don’t see “nice” in her performances right off, but her fans get it. On her Web forum, a Las Vegas man wonders, “Is it possible for straight men to be Kathy Griffin fans?” It’s true, her act draws lots of gay men. But another guy responds, “The message here is that every one of us is accepted. There are no minorities or majorities, just people getting along and laughing. In the end, that is all that matters, and that is the message that Kathy broadcasts.” An Australian sums it up: “To some, she’s possibly the meanest person in Hollywood, and at the same time, she’s possibly the sweetest.”

Her comedy seems spiteful, occasionally even cruel, if you think that big stars might care what she says about them. But you get the sense that she is standing up for us little people whose lives, like hers, will never include the glamour, wealth, fame and beauty of Britney Spears or Nicole Kidman. Griffin can make us feel like we’re not losers, because she’s speaking as one of us. Each time she sticks it to a star, she looks at the audience and affirms, “Yes? Yes!” as if to reassure us, her good friends, that we’re all in this together.

Onstage, Griffin talks fast, filling her act with detailed stories about her hilariously unfortunate experiences with celebrities. And it’s impossible to avoid an obvious comparison: Kathy Griffin and Joan Rivers, a comic whom Griffin reveres. Both have a large gay male fan base and, in recent years, have made their names tearing down big stars (A-listers) from their posts on the red carpet and onstage. Both have had numerous cosmetic procedures, and both have been building their careers for years.

It bodes well for Griffin, now in her mid-40s, that she appears to have staying power in a field that is especially unforgiving to women. She started out in improvisational comedy with the Groundlings in Los Angeles. She was a regular on the Brooke Shields’ TV vehicle Suddenly Susan for four years, a guest star on series ranging from ER to Seinfeld and a performer in numerous movies. Bravo recently renewed her Emmy-nominated reality show Kathy Griffin: My Life on the D-List for its third season, and that, in turn has built the audience for her DVDs and live performances.

Griffin’s gratitude over her current success is evident as she speaks by phone in a rare moment at home in L.A. between tour dates. The smoker’s voice from her DVDs is gone (actually, she neither drinks nor smokes), while her compassion is generous and her intelligence, obvious. Gradually, it occurs that Kathy Griffin is much more complex than a quick viewing of her current comedy reveals.

Here’s another surprise: she’s politically aware and quite liberal. As we spoke, she brought up celebrities, yes, but also political women like Gloria Steinem.

When asked if she uses the f-word to describe herself, she responds enthusiastically. “I’m a die-hard feminist, absolutely.” Griffin remembers discovering Gloria Steinem more than 20 years ago. “I don’t remember how old I was, but I remember she was a rock star, on the cover of Ms. Magazine. She was really hot lookin’, but really brilliant, chic.”

Despite her own political sensibilities (“I’m so far left I’m Sandinista,” Griffin joked on Larry King recently), she’s gotten herself into trouble when she busts the balloons of overinflated politicians, since her typical audience is more interested in celebrity talk than political points. She’s aware at those times that she’s taking a risk, calling it “a total Dixie Chicks, shut-up-and-sing” moment. So if she does political material, she includes stories of performing for the troops to balance it out.

Griffin has been to Afghanistan, Kuwait and Iraq, and like so many comics before her beginning with Bob Hope, her main goal is simply to make the troops laugh. Unsure of how her material would translate, she says, “I was more worried about bombing than being bombed.” But with a wink toward the context as well as comedy lingo, she adds, “I killed.” Her military hosts did give her a long list of things not to say, which struck her as ridiculous. She promptly used the list to comic ends in her shows back in the States.

Griffin is riding her D-list for all its worth. Should that lose its luster, don’t expect her to go away anytime soon. “I’m just all about longevity,” the 46-year-old performer says, citing Steinem, Barbra Streisand, Oprah Winfrey and Linda Ellerbee as inspirations. “I don’t want some guy to say, ‘You’re not good enough anymore, you’re not young enough anymore.’ I just really wanna be able to do my thing until I decide I don’t wanna do it.”

Kathy Griffin tapes her live Bravo special in two performances at the Wells Fargo Center on Friday, Jan. 12, at 7:30pm and 10pm. Last-minute tickets still available for both shows, both standing room only and seated. Due to the TV taping, there will be absolutely no late seating (7:31pm is late) and no ins and outs once seated; cameras are not allowed. Wells Fargo Center, 50 Mark West Springs Road, Santa Rosa. $20-$45. 707.546.3600.