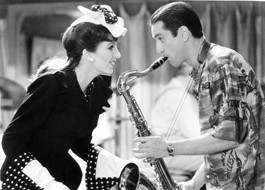 Take the new film book Scorsese by Ebert at face value, and it’s our greatest film critic interviewing our greatest living director. That’s the problem. Roger Ebert hangs the laurels on Martin Scorsese in a 1998 essay reprinted in the volume: “There is no greater American director right now than Martin Scorsese.” The idea of a “greatest living director” is a terrible approach for the evaluation of a talent. It entails too much build-up, as well as too much nostalgia for past work.

This short book combines reprinted reviews and interviews along with reconsiderations by Ebert of some of Scorsese’s films. It also includes a transcript of an onstage interview Scorsese gave at Ohio State University, the book’s most valuable section.

Scorsese by Ebert (University of Chicago Press; $25) is the work of a fan interviewing a fan. Ebert has a subject who tends to open himself up like a can of beans, anyway. The director’s effusiveness and enthusiasm are part of his reputation. Probably no other American filmmaker worked so closely with former film critics as screenwriters: Paul Schrader, Jay Cocks, Paul Zimmerman. And certainly no other American filmmaker is as dedicated to the elements of studio-era craftsmanship. Who else has talked so convincingly about the terrible deterioration in film stock, the death of Technicolor, the neglect of Michael Powell?

Ebert was in on the beginning of Scorsese’s rise to critical esteem. He was perceptive enough to realize that Scorsese’s I Call First (later known as Who’s That Knocking at My Door) was the work of a director going places. And Scorsese claims that he kept Ebert’s review of his first film in his wallet for years. Both were ardent Baltimore Catechism&–era Catholics; the critic from southern Illinois, the director from Little Italy. Both wanted to enter the priesthood.

In essay after essay, Ebert identifies the mother/whore dichotomy that Scorsese has worked like almost no other American director. The motif appears strongest in Who’s That Knocking at My Door, where Harvey Keitel rejects a woman who has been raped on the grounds that she is impure. How much is this kind of dichotomy Italian Catholicism, and how much is it the private obsession of Scorsese? According to Scorsese by Ebert, Ebert once met the director at a low point. Scorsese was brooding over one of his divorces and claiming that he’d go to hell for leaving his wife. Ebert thought Scorsese was joking. Nope.

“When people sincerely believed in hell, they were not so fond of striking graceful attitudes on its brink,” George Orwell wrote. Look at Scorsese’s very practical mother, playing a nana fixing a snack for the Mafia gravediggers in GoodFellas. He couldn’t have gotten the fear of hellfire from that practical woman, could he? And then you read this Scorsese quote: “Italians are pagans. I took up Catholicism on my own.”

Worked up by the theatrical side of Catholicism—the ceremony of high mass, the candles, the music—Scorsese had similar autointoxication with the movies. And intoxication is the problem. Though he brought grindhouse levels of violence to the respectable film, Scorsese is peaceable in real life: a suffering asthmatic, a keeper of poodles, a man who never saw a boxing match until he made Raging Bull. (Serious fight fans would have to say, “That explains a lot.”)

The problem of seeing the violent life from a remote view appears all over Scorsese’s movies. Moreover, Scorsese is a veteran of the drug era, which made criminals out of so many basically peaceable people. That Robert De Niro, Ray Liotta and the horror clown Joe Pesci became so fetishized is all part of Scorsese’s skill. It’s also the result of his myopia.

Sometimes, this admiration for the mafia type borders on a fan’s shallowness. Scorsese comments here, with no protest by Ebert, “If you had personal dealing with Luciano, he was great.” As a first-rate film scholar, Scorsese ought to know that the 1937 gangster film Marked Woman was based on Luciano’s less charming side.

At worst, Ebert tries to lay down the liturgical law against censors of The Last Temptation of Christ, accusing them of “the sin of pride.” At best, he revives some unpopular films, sometimes with a fan’s confusion and helplessness: “I guess we go to New York, New York to enjoy the good parts.” Ebert writes about the unlovable but tough King of Comedy: “If it has greatness, perhaps it is in its mystery.” So many times in Ebert’s reviews of Scorsese’s work, there’s a sense of the battle for a film being lost; he knows he’s dealing with movies that are too difficult, too painful to be popular.

It’s easier to remember the bravura scenes: the ceiling camera in Taxi Driver; the fights in Raging Bull (a masterpiece of style, not content, that fight); the close-up on Paul Newman’s face as he’s fitted for glasses in The Color of Money; Nick Nolte slugging cognac from a paint-smeared snifter in New York Stories; Joni Mitchell’s moon-burst of female energy among the bearlike musicians in The Last Waltz.

Too bad Ebert writes that he has “no clue” what Mitchell’s song “Coyote” was about. I think it’s directly about Neil Young, but I know it’s about a woman musician picking up male prerogatives. That Ebert can’t celebrate that moment—well, that’s Ebert echoing the old Madonna/whore dichotomy at work, the career-long void in the heart of Scorsese’s work. Analyzing it will never free some people from it.