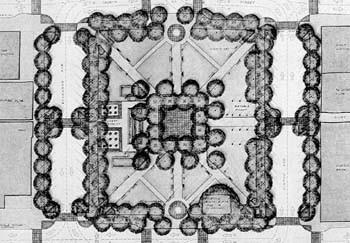 Shadow of a Doubt: In the ’40s, Alfred Hitchcock used it as a film location. Now Courthouse Square is becoming a political hot potato.

Not everyone is sold on the Courthouse Square reunification plan

BERNIE SCHWARTZ envisions a green haven. A friendly, safe, and accessible downtown park. Maybe something modeled on the homey plazas in Sonoma and Healdsburg, with diagonal footpaths and level terrain, and bustling with such community activities as live performances, art shows, a winter ice rink, and chess games under thin-limbed canopy trees.

“Unless downtown can become an attractive place to seniors and families, we’re never going to revitalize,” Schwartz says. “We want to enrich and enliven downtown so it works for the community and then becomes irresistible as a tourist attraction.”

Right now, according to the 17-year owner of California Luggage on Fourth Street, Courthouse Square is sprawling, difficult to navigate, feels unsafe, and is underused because it’s “isolated, not integrated.”

But the controversial project is generating not only hopes, but fears. Some local merchants think that after investing big bucks in the ’60s to split Courthouse Square, the city should leave well enough alone.

As planned, the $1.9 million project would eliminate the sunken areas, redwood trees, some fountains, and other “visual blockades.” The plan also calls for unifying the east and west halves of the square by closing the one-block cobblestoned segment of Santa Rosa Avenue, between Third and Fourth streets, that bisects the square and links to Mendocino Avenue.

The study was put together for the Coalition to Restore Courthouse Square by local civil engineering firm Carlile, Macy, Mitchell & Heryford. When asked about funding for the study, civil engineer Dick Carlile, who was recently appointed to the Santa Rosa Planning Commission, says the work was done on a “mainly volunteer” basis.

There’s no question how Dave Madigan feels about the project. The message emblazoned in large black letters on the storefront windows at Madigan’s Stationery store at Mendocino and Fifth reads: “Just say no . . . to the reunification of Courthouse Square.”

Father and son owners Tom and Dave Madigan say cost is a big concern. “We’ve just finished paying for the downtown design plan from 1981, the rents are high, and then there’s the cost of earthquake remodeling–they should give us some breathing room,” complains Tom Madigan.

“Essentially half our taxes go to supporting downtown bureaucracies,” says Dave Madigan, who this week sent out letters to the downtown community on behalf of the Downtown Business Association, decrying the project, “and taxes are added into rent.

“Look at the number of empty stores downtown to see a direct result.”

Traffic congestion is another concern, with detractors pointing out that there’s more traffic in Santa Rosa than in Healdsburg or Sonoma. “The [architectural] illustration looks very nice, but the traffic flow will cause the worst bottleneck you ever saw,” claims Tom Madigan.

“Then, the diagonal parking means cars will have to back out into the traffic flow. It’s going to be bedlam.”

Sid Dadeghian, owner of both the Sonoma Coffee Co. and Squeezers on Fourth Street, says the city’s priorities should be building a multistory parking lot in the area and adding foot patrol officers for better security. “The change in the square isn’t going to help anyone. Ninety-nine percent of the businesses are against it, and the only merchants who want it are those who’d benefit directly,” he claims. “This makes no sense. By the time construction is finished, there may not be many businesses left here.”

Pete Mogannam, an owner of the 4th Street Market and Deli at Fourth and Mendocino, says he supports the plan 100 percent, but only “if it stays clean with no loitering, panhandling, and drug dealing, if it portrays a good image for downtown, and doesn’t turn into another Juilliard Park [where loitering, drug dealing, and random violence discourage visitors].”

Schwartz says Courthouse Square has a “dead zone”–empty buildings and tree groves that induce lurking, and costly vandalism that the new design would counteract. “We need to overwhelm this vacuum for undesirable activity with desirable, legitimate activity,” he observes.

Supporters of the reunification see it as a revenue maker that will fill now vacant retail spaces and attract swanky stores like Crate and Barrel and the Z Company. “If you increase the business vitality, you increase the coffers,” says Schwartz.

“I think the whole town would enjoy [the new square], not just the downtown merchants,” says Bonnie Lyon, a downtown psychotherapist. “It’s unfair when the benefit accrued by all Santa Rosa should be a burden on the merchants.”

However, Chris Facas, general manager of the Santa Rosa Plaza mall and chair of the Downtown Partnership Committee, an advisory panel appointed by the council to explore ways to revitalize downtown, says that although the committee embraces the concept of reunification, it’s far from a done deal.

“We’ve requested the City Council to provide us with assistance to see what economic benefits would be gained and assistance developing strategies for financing,” he says. “We have not asked the city to spend $2 million.”