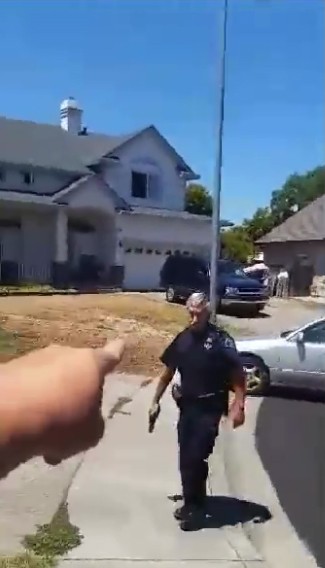 In case you missed it (and how could you have missed it?): It’s July 29, and Don McComas is out in front of his house on what appears to be a neat little cul-de-sac in the so-called Friendly City, when a police officer in a cruiser sort of slow-rolls in front of his driveway and stops.

McComas, as is increasingly the case in a citizenry that’s had it with police violence against the very citizens they are sworn to protect and serve, filmed the officer as he sat in his car.

The officer opens his car window and films McComas right back. Then, a few minutes later, he gets out of his car and tells McComas to get his hand out of his pocket. The officer unholsters his weapon, at which point the internet let out a collective “WTF, dude?”

McComas appears to put a phone and set of keys on the roof of his car. He points at the officer with one hand and films with the other. (Does McComas perhaps have three hands?)

As McComas films him, the officer approaches McComas with his weapon, at which point McComas freaks out. He retreats in apparent fear from the officer and makes some comments about past interactions, presumably of the negative variety, at the hands of Rohnert Park police.

McComas has not responded to a request for an interview with this paper.

The unpleasant and tense interaction divided people who commented on the video into two main groups. The online narrative about the episode syncs up with others we’ve seen, though as police-citizen interactions go, this one was pretty mild.

Nobody got shot in the back while running from a cop, for example. Nobody died screaming that they couldn’t breath while being subdued by the police. But it’s still a disturbing video and the points of view we’ve seen on it basically come down to, “Don’t get sassy with the police and this won’t happen” and “There’s no justification for this officer unholstering his weapon.”

This paper sent a list of questions to the Rohnert Park police department, but they didn’t respond. Elected officials took to the internet a day or two later, once the video had gone viral, to announce that there was an investigation. The gist: We take these things very seriously. The money quote from Assistant City Manager Don Schwartz: “The incident portrayed on the video is not a typical interaction between our Public Safety Officers and the public.” Well, good on you!

The interaction is a poignant example of how far off the rails citizen-police interactions have gone in this country. The officer seems to take a page from the “open carry” movement: He deploys a gun to force respect from an unarmed citizen, which is otherwise known as intimidation.

McComas’ posture here—freaked out and filming everything—appears to have been influenced by a growing catalogue of highly questionable police activities in and around the presence of, mostly, black Americans. Critics of McComas have called him an “agitator” for filming the police officer, who at one point wonders, mockingly, if McComas is a “Constitutionalist crazy guy.” No, that would be Ted Cruz.

The police officer has been placed on paid administrative leave pending the investigation. There’s still this thing called “due process” in the criminal justice system, so there’s that.