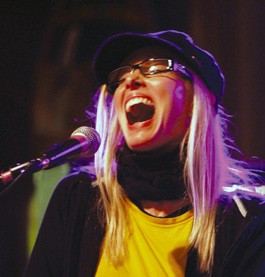 Cat McLean has covered a lot of ground. Since 1997, the Sonoma-based singer, songwriter and multi-instrumentalist has sold more than 150,000 copies of her four self-released discs and has shared the stage with Joe Walsh, Bob Weir, Heart and Peter Frampton. In 2001, she scored a Top 20 hit in the U.K. with “Camouflage,” co-written with producer Narada Michael Walden. She’s been featured twice in Guitar Player magazine, and her song “Ho” is in a new film.

But McLean is just getting started. After years of hiring different musicians for every gig and recording session, she’s settled with a steady power trio. The band bonding (with bassist John Shields and drummer Ryan Comiskey) is “like being born again, like having my first teenaged band experience,” she says enthusiastically. “I’m excited about playing again. It feels like I’ve gone full circle.” The trio format also opens up McLean’s songs, which range from Americana-style melodic rock to funky alt-metal to modal industrial grooves. “This is a tight, interactive trio,” Cat boasts.

The new Cat McLean Trio plays Tour de Cure, a fundraising bike-a-thon sponsored by the American Diabetes Association, on Sunday, May 1, from noon to 4pm. The tour begins and ends at the Veterans Home of California, 100 California Drive, Yountville. Noon-5pm. 888.342.2383.