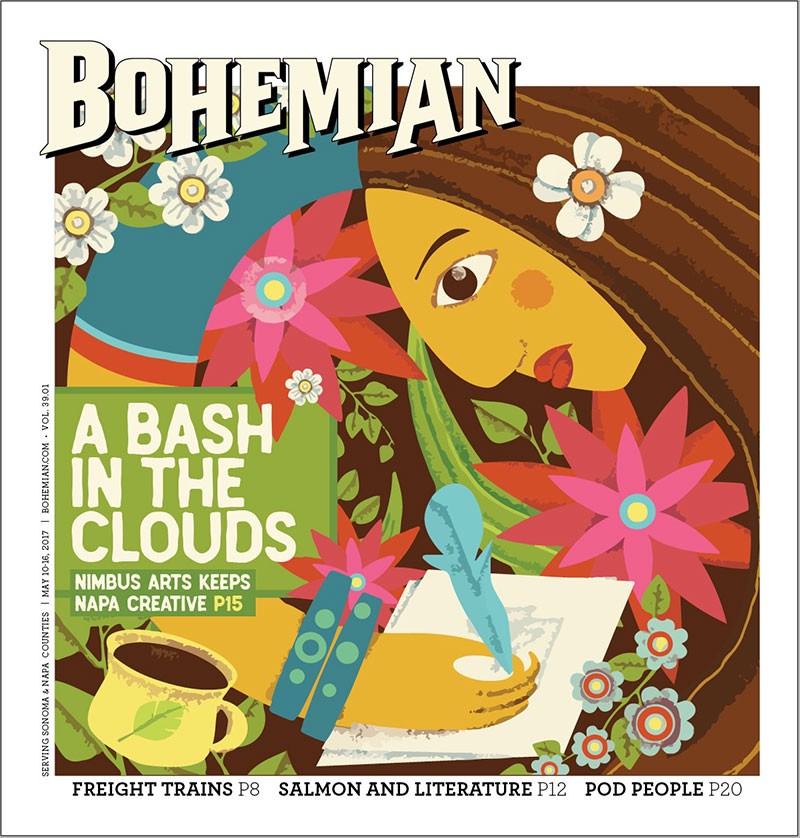 In any discussion about Napa Valley culture, the first two words that invariably come up are “wine” and “food.” But there’s a third dimension to the region—the arts—that has been steadily expanding in scope and inspiring residents and visitors to enjoy and embrace their creative side.

At the forefront of this cultural dimension is Nimbus Arts, a nonprofit arts center based in St. Helena that offers eclectic art classes for students and engages with the community through public projects and installations.

As Nimbus prepares for its annual Nimbash fundraising event on May 13—the valley’s biggest art party of the year—along with a summer filled with art camps, the close-knit community of artists and organizers involved in the nonprofit reflect on the center’s history and its two-fold impact on the cultural landscape of the North Bay.

“Our mission is to reach communities that need art,” says executive director Jamie Graff. “But our other big mission is to support local artists, to make life feasible for them here, because they’re such an asset to the community.”

Nimbus first took shape in 2005 after founder Dana Johnson’s daughter spent a week in a children’s hospital. While there, Johnson saw art projects in the hospital’s playroom that helped alleviate the stress of the situation. After her daughter’s recovery, Johnson sought to share her experience with the community at large, and recruited Graff to form Nimbus.

“It started out just trying to explore what the community wanted from an arts center,” says Graff, who spent 12 years as a winemaker before Johnson approached her.

One of the group’s earliest offerings was a sculpture camp, which Graff says involved studying and creating clouds through sculpture. “What’s important about that one is it’s where our name came from,” says Graff. “And it was also the model that would become the Nimbus style to teaching a multidisciplinary approach to creativity.”

From the early days of painting and drawing classes, Nimbus grew organically, and as Graff found more and more local artists to work with, the center’s ability to teach other disciplines expanded.

“We had a group of people here [in St. Helena] committed to making it work,” Graff says. Today, the center boasts metal, ceramics, glass and other media classes from nearly 40 artists.

“We have a think-tank style of developing our programs,” Graff adds. “We get the artists together for meals, and have conversations about the directions of the center; it’s a really dynamic, creative way to do it as a team.”

Graff calls the Napa Valley art scene bohemian and says the region’s artists have an ability to tap into people’s imagination with creative flair. “Everybody here knows everybody; seamstresses, painters, musicians. It’s a really close-knit community. You don’t have to go far if you need something from someone. It’s a really supportive environment.”

Anne Pentland has been living and working in Napa Valley for the last 25 years, teaching and making art, and organizing projects for the Napa Valley Wine Auction, the Calistoga Education Foundation and Safari West in Santa Rosa, among other groups.

Graff recruited Pentland while she was teaching after-school classes in Calistoga. Pentland, coming up on 11 years at Nimbus, is now the resident artist. She designs a lot of the programming and collaborations with groups like Mariposa, a prevention program of the Napa County Office of Education that empowers Latina youth in middle and high school to break the cycle of violence through the creation
of large murals in locations
like downtown Napa and the
St. Helena elementary school.

“The magic of Nimbus is that we are really a family,” Pentland says. “We’re a lot of artists doing different things, but when we come together there’s a synergy and the sum is greater than the parts.”

Nikki Ballere Callnan echoes that statement. A ceramicist who takes inspiration from natural forms and found objects, Ballere Callnan runs NBC Pottery with her husband, Will, and creates custom works for clients like the Restaurant at Meadowood. She has also taught at Nimbus since the satellite days.

“Where we live is a very special place. We are lucky enough to have a lot of people in the community who support art,” says Ballere Callnan. “Like a cat, Nimbus has always landed on its feet. We just want to share our passion, and Nimbus, when you’re there, you’ve found home.”

While art is largely supported by locals, tourists and visitors still struggle to see the creative side of Napa Valley when they swirl at the wineries and nosh at the restaurants.

“When I first moved here, I wasn’t sure we were going to see any art,” says artist and graphic designer Nick Cann. “We soon found out that there were thousands of artists in the valley, but you don’t hear much about it. Nobody talks about it; they just do it.”

After working in Los Angeles as a freelance set and costume designer and living in Sausalito for many years, Cann and his wife moved to Napa Valley to retire. But he says he’s nowhere near retirement, teaching classes at Nimbus and inspiring students to pursue their passion. Like many of the artists working for Nimbus, Cann credits the center with providing a place where artists can make a living and express themselves at the same time.

“It’s a lot more than meets the eye,” he says of the arts community. “The schools encourage art, but they really don’t tell young people all the possibilities for careers in art, from interior design to industrial design and all the rest. I consider it my job to let the students, and their parents, know that there is a future in the arts if they want to do it.”

In addition to the center’s calendar of classes, Nimbus, located on St. Helena’s Main Street across from the Napa Valley Wine Train’s rail line, is open for visitors to schedule customizable art experiences like one-on-one classes. “We encourage them to come in with a crazy, fantastical idea,” Ballere Callnan says, “and then let them see it happen.”

“Art, at its core, is another form of communication,” Pentland says. “In this day and age, when everyone is so connected and you have the whole world at your fingertips, literally, to have a deeper understanding or sense of your world in all of its forms and formats is important. Art is another way of processing your world, and for me, creativity is one of the most important aspects of living.”

Pentland also notes that children learn in a variety of modalities. “Some are visual learners, some are auditory learners. So art and creativity is another format for children to learn,” she says.

As a nonprofit, Nimbus partners with several grant-donating organizations, such as the Clif Bar Family Foundation, and private individuals in the region to fund its programs and pay its artists a fair rate for their time and talent.

In the last few months, the political climate has not been encouraging for the arts, with the president eager to cut funding for the National Endowment of the Arts and further limit the potential for public schools to teach extracurricular classes like art. Still, the staff at Nimbus see these times as an opportunity to further the conversation about the importance of art in our daily life.

“In fact, as a result of the current national dialogue, there is a greater spotlight on arts and arts in education,” Pentland says.

“I think this is when Nimbus has to work harder to keep art at the forefront of our community and keep it alive,” says Ballere Callnan. “Everyone at Nimbus is passionate. We do art seven days a week. Sure, you gotta work a little bit harder these days, but that’s what you do when you love what you do.”

Nimbash is a unique event, says Graff. “I really want the community to understand who we are through the event, and doing an auction just didn’t feel like enough.”

With that inspiration, Nimbash opens the fundraising evening with an interactive art party for guests that includes various hands-on activities, demonstrations, silent-auction items and live music. “We have trouble getting everyone out of that party when it’s over,” Graff says.

The annual event adopts a different theme each year, and this year’s theme of “Street Art” will drive the creative output. After the fashion show, a live auction and a dance party cap off the night.

For anyone looking to become involved in Nimbus’ programs, the center offers two seasons of classes open to everyone in the North Bay and beyond. Graff also says that any artists in the area who are interested in working with the center simply need to call her up.