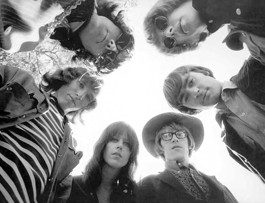 Sausalito Art Fest films our own little slice of Woodstock

Perhaps the finest commercial art fair on the West Coast, the Sausalito Art Festival is also widely known for its great food, spectacular bayside setting and the yowza music line-up. Musical artists who normally hold sway in large amphitheatres seem to like the intimacy and immediacy of the tent at Sausalito and many renowned older acts that might fill the Shoreline are often on the roster. This year is no exception—except that the amphitheater they most famously filled was on a small muddy farm in upstate New York—and if you’ve read any media lately you know how this sentence ends: at Woodstock.

Country Joe McDonald hosts the “Heroes of Woodstock” tour arriving at Sausalito for the final day of the fest on Sept. 7. In attendance will be pianist Tom Constanten who performed with the Grateful Dead, the Quicksilver Messenger Service, Big Brother and the Holding Company, Canned Heat, Jefferson Starship and plenty of movie cameras. The bands are essentially adhering to the set lists they performed at the original concert. The Starship will actually play the Airplane; Big Brother will stick to Janis.

The concert, as was the Aug. 15 tribute concert at the Bethel center in Woodstock, is being filmed in high definition, 2-D and 3-D for a DVD release slated for October. Not only will it feature the acts, if you attend Sausalito, there’s every chance it will also feature you.

What has us stumped is the 3-D aspect. Not to be ageist, but the original dudes from Big Brother, the Starship et al are of an age when unfortunate hairs sprout from eyebrows, ears and noses. Do we really want that kind of natural phenomenon springing, all life-like, into our faces? “Nobody’s zooming in that close to anyone,” assures Golden Leaf Pictures vice president of creative development Ed Olson. “What 3-D does more than anything is that it gives you a clarity more true to the real concert experience. Given the immersive quality of the imagery, there’s this really great feeling of depth.”

With a steady cam, overhead booms and a camera onstage, the spectacle of filmmaking will be as much a part of the afternoon as the music itself. Olson says that there will be signs alerting the crowd to the possibility that they’ll be captured before giving a short laugh. “You should move to the back,” he warns, “if you’re with someone you shouldn’t be with.”