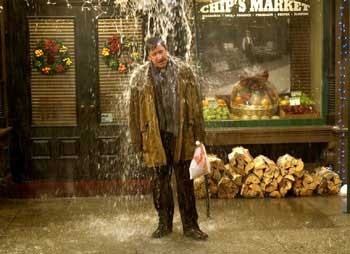 ‘Christmas with the Kranks’

‘Kranks’ remind that the holidays are a feeling

You know, I’m OK with a feel-good movie now and then,” says Diane Amos, side-stepping her way out of the river of people exiting the movie theater in which we’ve just seen Christmas with the Kranks, a satirical “feel-good” film about a couple of empty nesters (Tim Allen and Jamie Lee Curtis) who upset the fabric of their neighborhood when they attempt to skip Christmas for one year.

Upstairs in the multiplex, we take over a table at the snack bar counter as Amos good-naturedly critiques the film. While she allows that Kranks might not be the greatest Christmas movie ever made (that, of course, would be A Lion in Winter), she correctly points out that the other audience members loved this movie, vigorously cheering and applauding as it came to a close.

“When was the last time you saw that? Did you listen to the kids’ reaction in there?” Amos asks. “You can see that for the audience this was aimed at, this movie totally did the job. I thought it was fun. It’s OK if a Christmas movie is just fun.”

Amos is a San Francisco­based actress and comedian, whose wise and funny 1996 one-woman show Balancing Act told about being raised by interracial (black and white), interfaith (Baptist and Jewish) lesbian mothers. She’s appeared in numerous movies, from Angels in the Outfield and Nine Months to Patch Adams and Twisted, but is probably best know as the Pine-Sol lady in those energetic disinfectant commercials.

Today, after watching the Krank family rediscover the joys of Christmas, Amos has been eased into a Christmassy mood herself, and now she’s thinking about the holidays of her own unorthodox childhood.

“During those years, we did Christmas and Hanukkah,” she remembers, “we did a little of everything, the traditional Hanukkah foods and the seven days of Hanukkah, and then we’d do Christmas—and it was really fun. Of course, it meant more presents and more music, but it was more of everything good, more family and more stories and more love. It was fantastic.

“We were a big story family,” Amos continues, after pausing to exchange pleasantries with someone who recognizes her, “and stories always became especially significant and wonderful and important at the holidays. My one mom told stories and my other mom read stories—long, wonderful stories about how Hanukkah came to be and things like that. And my mom, she was such a good storyteller, she had my friends convinced that she’d once taught school in the African bush. She was that good.”

Asked if now, as an adult, she identifies at all with the Kranks’ urge to avoid all the Christmas effort, Amos shakes her head.

“I love Christmas!” she grins. “Growing up, there were some Christmases—especially when we didn’t have money, which was very often depending on what phase of our lives we were in—when we could not really have Christmas, with all the presents and the tree and everything. In the movie, they try to skip Christmas, but we really would skip it. So on Christmas day, we’d go to the movies and have tacos afterwards, and that would be Christmas. And it was wonderful because we got the message, and the message was: Christmas is not about the presents and all that, Christmas is about being together, about hanging out together as a family. And it was all good. It’s corny to say that Christmas is a feeling, but Christmas is a feeling. That’s what I was taught and that’s what I’m teaching my kids now.”

“And that means doing chores,” she says with a laugh. “In our house, that’s what ‘chores’ mean—loving each other in the household enough to clean up after each other.”