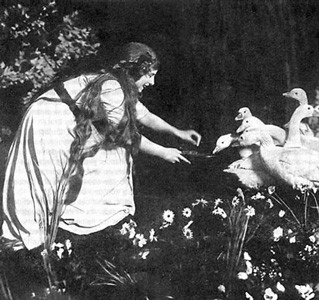 Learning to master the goose, grease and all

Dickensian in the collective American imagination, the Christmas goose is usually thought of as hanging, bloodless and white-feathered, in a quaint shop window, or brought steaming to the table amid the clapping hands of a restored Tiny Tim. While a goose was certainly a luxury, it was not a foodstuff to strike fear into a cook’s heart.

In our brittle modern times, few of us entertain this bird outside of imagination’s realm for one main reason: the fat. While goose actually has less fat per pound than lamb or beef, and what copious amounts it does have are richer in mono-unsaturated (good) than saturated (bad) fats, visions of an oven raging with a grease fire tend to stoke most chefly enthusiasms in favor of the humble ham, the smaller duck or the knowable turkey.

Petaluma farmer Sylvia Mavalwalla would beg to differ. While she herself won’t be cooking this Christmas–it’s one of her busiest days of the year–her daughter-in-law will be roasting a goose, one of Mavalwalla’s geese, as the family often does. Establishing S&B Farms with her husband Bajun some 17 years ago, Mavalwalla now raises one of the few flocks of so-called heritage geese left in the United States. Native to North America, the American Buff goose thrives on Mavalwalla’s west Petaluma farm, but the 64 birds she sells each year are fortunate offspring. The international Slow Food organization estimates that there are only 1,000 breeding pairs of this goose left in the world.

Whether heritage or no, goose is one of the few meats that isn’t factory-farmed, is protected by law from being fed growth hormones and is only treated with antibiotics when it’s actually sick, as giving medicine to a goose–a difficult task, to be sure–doesn’t improve its appetite.

Since being acclaimed by the Slow Food movement last year, Mavalwalla can’t keep enough American Buff geese in stock for the demand. Her flock was sold out this year by the second week in September; in previous years, she’d just now begin taking orders. Surprising to some suburban ears, most of the ducks, chickens and turkeys that Mavalwalla sells leave the farm alive.

“The Hispanic and Asian people are not into old dead food,” Mavalwalla says, noting that many of her Latino customers have told her that they feed a bird whiskey before slaughtering it. “They say it tastes different,” she smiles. “It goes out happy.”

As for cooking the bird, Mavalwalla shrugs, “I don’t think that it’s any more difficult than a turkey, although I put the turkey in a closed pan. For the goose, you put it on a broiler-type pan so that there is plenty of space for the grease to drip down.”

Ah, the grease. Always the grease. But once one has a plan for handling steaming rivers of goose fat, everything else is as easy as putting a bird in the oven until it’s cooked. Of utmost importance, cautions Mavalwalla, is to first scoop out by hand all of the visible fat and set it aside. “People from European countries render it down and use it in place of butter,” she says, explaining that it has a “clean taste.” She keeps her rendered fat cooled for use in frying potatoes and other root vegetables.

Next, prick the bird’s skin all over–without damaging the meat–so that there are plenty of conduits for the melting fat to pour forth from. Some chefs like to quickly blanche the bird for a few minutes in boiling water at this point or to leave the bird uncovered in the refrigerator for a few days. Both methods “tighten” the skin and help to crisp it when cooked.

Once the bird is washed, patted dry and pricked, it can be treated like a turkey or overweight chicken. All of the meat, even the breast, is dark, and goose has a chewier, firmer consistency than turkey, which may be fairly mushy given commercial breeding. Most recipes suggest starting with an oven as hot as 475 degrees for the first 15 minutes and then roasting at 350, figuring 25 minutes per pound, until the juices run clear or an internal meat thermometer registers at least 170 degrees.

Begin cooking the bird breast-side up and flip half-way through (wearing clean rubber gloves may aid the flipping), and, if necessary, pour off the fat. Curiously, Mavalwalla assures that “the more you baste it, the more grease it will pull out.”

But don’t get fanatical. As Mavalwalla sagely says, “If you don’t have fat in the goose, it’s no good.”

This recipe, adapted from Gourmet magazine, has gotten raves for the port gravy that accompanies it. Be certain to use a deep (at least two inches) flame-proof roasting pan and a metal baster, as shallow pans fill up too quickly and plastic basters tend to melt.

Preheat oven to 425 degrees. Discard loose fat from goose. Rinse goose inside and out, and pat dry. Pierce skin all over with a fork. Season with salt and pepper, and loosely pack neck cavity with enough bread to fill out cavity (this will prevent cavity skin from collapsing during roasting). Fold neck skin under body and fasten with a small skewer. Fill body cavity with 1 quartered onion and 1 celery, and tie legs together loosely with kitchen string.

Transfer goose, breast-side up, to a rack set in a deep pan and roast in middle of oven for 30 minutes. Reduce temperature to 325 degrees, and carefully pour boiling water over goose (juices may splatter). Roast, skim fat and baste every 20 minutes, for 2 to 2 1/2 hours. Transfer to a heated platter. Keep warm, loosely covered with foil.

Spoon off fat from pan juices and reserve. On top of stove, deglaze pan with white wine and port over moderately high heat, scraping up brown bits, and boil mixture until reduced by about half, adding broth as necessary. Transfer to a large measuring cup. In a 3-quart heavy saucepan, whisk together 1/4 cup reserved fat and flour, and cook roux over moderately low heat, whisking, for 3 minutes. Add port mixture, and broth for desired thickness, then bring gravy to a boil, whisking constantly. Simmer, whisking frequently, 5 minutes, or until thickened. Season with salt and pepper.