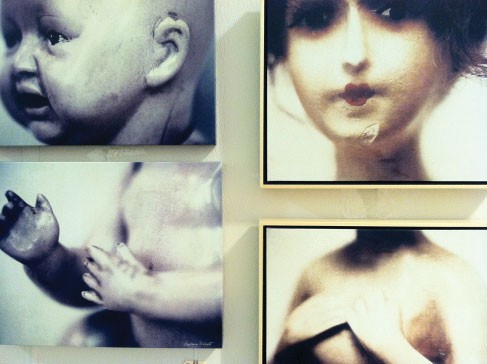 The building started as a produce packinghouse in the 19th century, and held stints as a winery, U.S. Army ammunition warehouse and, from the 1950s, a poultry slaughterhouse. After Fulton Valley Farms closed in 2010, the Fulton facility was vacant—until this month.

Modern track lighting now stands out against the old wooden beams of the high ceiling, and canvases large and small pop with color on the cement walls. The shiny, sloped floors where chicken blood once pooled are now covered by designer shoes and, perhaps, an occasional droplet of wine from an enthusiastic art lover—the former slaughterhouse is now a pop-up art exhibit. (It’s the second such transformation in the county, the other being Slaughterhouse Space in Healdsburg.)

Dubbed the Fulton Art Depot for its proximity to the future SMART rail station, the pop up has been a success with 300 attendees and over 75 artists, including Barbara Elliot (whose work is shown above), responding to a call for work, says Vicky Kumpfer, who helped set up the event. Despite the great response, “A Month of Sundays” will be just that—one month of art exhibits on Sundays. “The space is really raw right now in the sense that the owner is not sure what he’s going to do,” says Kumpfer. “Most likely he will keep it as an artist space.”