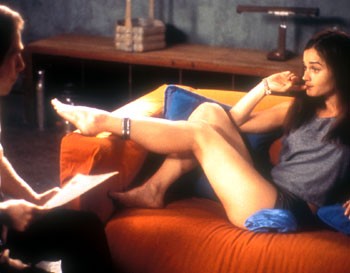 The Trappings Of Home: Tim Blake Nelson and Robin Tunney explore the intricacies of involuntary confinement.

Indie filmmaker Finn Taylor learns to ‘Cherish’ his wild side

It could have gone either way. Director Finn Taylor (Dream with the Fishes) knew from the start that his low-budget, independent script–revolving around the subject of house arrest–might sound a bit gritty and bleak. The idea grows no more cheery when one learns the details: an emotionally fractured woman, accused of a crime she didn’t commit; her two-year stint in the electronic bracelet program, confined to a crumbling San Francisco apartment; an anal-retentive deputy; a truly creepy stalker. Yet even with raw material like this, Taylor has created a rare little film that reveals itself as unexpectedly charming, completely engaging, and fun–but with just enough gritty stuff to make it remind you of its indie origins.

Which is exactly what Finn Taylor had in mind.

“Independent films–as marvelous as they are–all tend toward dark, cynical, self-serious dramas,” he explains. “Either that or they’re light, broad comedies about nervous teenagers having sex.” What Taylor envisioned was something in between. “I wanted to make a slightly new kind of film,” he says. “Not totally radically new, but just a little bit new, tonewise.”

On the strength of his quirky, original script–inspired by true stories of people in the electronic bracelet program–Taylor was able to attract a cast of actors similarly eager to try something slightly new. According to Taylor, a parade of big-name actresses competed for the part of Zoe, the nerdy, self-doubting, music-obsessed dotcommer who lands in virtual solitary confinement within her own apartment. The part went to Robin Tunney, whose career has been ping-ponging between Hollywood blockbusters (Vertical Limit, End of Days) and edgy independent stuff like Niagara, Niagara. Tim Blake Nelson–the actor-director best known as the goofball Delmar in O Brother, Where Art Thou?–was tapped to play Daly, the strait-laced “bracelet officer” assigned to Zoe’s case. The rest of the cast includes singer Liz Phair, actors Lindsay Crouse and Jason Priestley, and comedian Nora Dunn. A solid hit at this year’s Sundance Film Festival, Cherish was picked up by Fine Line features and now hovers on the brink of its national theatrical release on June 7.

Taylor–conducting this interview moments before a special prescreening of his film at the Rafael Film Center–admits that some of the best moments in the movie came from suggestions or improvisations by the passionate team of actors.

“This script was in my head for years,” he says. “I literally did 1,200 story boards to prepare for it. But, having prepared, I then realized it was OK to play and to take risks and–as corny as it sounds–to try and follow my muse. Sometimes, my muse appeared in the form of the actors themselves, who truly understood what I was attempting.”

Taylor, it so happens, started out as an award-winning poet. Perhaps this explains his elaborately visual flights of fancy and his imaginative use of syrupy ’80s songs (all of which play like a kind of supporting character in the movie).

“Maybe being a poet has something to do with that,” he allows. “The music came about during a trip through Oregon while I was planning this movie. I was listening to the radio–I’d found this channel that played all these vaguely creepy love songs.” Suddenly, the music and the movie became fused in Taylor’s mind. “Once I decided we were using these songs,” he goes on, “I wanted everything in the movie to stylistically reflect those songs–in terms of the way I shot it, the colors we used, or the big, hyperdramatic zoom-outs.”

But Cherish is more than just a cool soundtrack and a sharp look. At its heart, says Taylor, Cherish is about “an unhappy woman who finds her own power when she suddenly has only herself to rely on. I could have made a film about someone in the house arrest program who falls apart and goes nuts. But I think I’m more interested in redemption, in growth, in moving beyond fear than I am in being edgy and pessimistic.”

Mirroring Zoe’s remarkable evolution, Taylor says he too grew while making the film.

“On my first movie, I was so worried about making mistakes,” he says. “On this one, I said to myself, ‘Life’s too short. I’m gonna take some risks. I’m gonna have fun.’ And at Sundance, I realized that that attitude had translated to the audience. It’s like if you’re hosting a party and you get all stressed out over the appetizers and stuff, nobody’s going to have a good time. But if you relax and have a good time, everybody’s going to have a ball.”