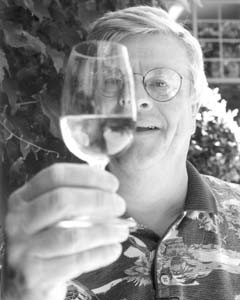 IF THE CHENIN BLANC grape were a department store, it would be Kmart. If it were a sport, it would be bowling. If it were a comedian, it would be Rodney Dangerfield, or at least the persona Rodney portrays. When it comes to respect in the modern wine world, dozens of grape varieties garner greater degrees than chenin blanc.

Until chardonnay exploded in popularity during the 1980s, there was more chenin blanc planted in California than any other white wine grape. It remains ubiquitous today, but only a small percentage finds its way into varietal bottlings; most is blended away, often used to “stretch” more expensive white wines, including chardonnay.

Sometimes the most dependable, hardest-working laborers are overlooked by their supervisors, who bestow promotions upon more gregarious, if less productive, workers. And so it is with chenin blanc, which one winemaker has described as having “the personality of a well-behaved child.”

The grape is cooperative in a number of ways. It tends to ripen smack in the middle of harvest season, necessitating neither early call-ups of the troops nor brow-furrowing over sufficient ripening. It is easy to pick, growing in compact clusters. And its tough skin allows it to make the trip from the vineyard to the crusher with minimal damage. It’s a grape that does not require a great deal of thinking on the part of winemakers, so most vintners simply turn the grapes into wine and save their brain cells for the more cerebral pursuits of crafting world-class cabernet sauvignon and similarly flashy varietals.

Those who know of the grape’s heritage are more likely to appreciate its distinct and delicate nuances. In the Loire Valley of France, chenin blanc is the exclusive ingredient of wines labeled Vouvray, Savennieres, and Coteaux du Layon, all highly acclaimed and much sought after.

In California, a handful of knowing vintners have embraced chenin blanc as both a wine of distinction and a viable commercial product. And at least a couple of them practice their craft here in Sonoma County.

Perhaps the most consistent local purveyor of quality chenin blanc is Dry Creek Vineyard, which has been sourcing grapes from the Clarksburg appellation of the Sacramento Delta region for years. The winery’s chenin blanc from the 1981 vintage included Clarksburg grapes, and the recently released 1998 vintage is 100 percent Clarksburg.

Winemaker David Stare–whose vintages of chenin blanc have garnered more than 30 gold medals from esteemed wine competitions–says the reason his bottlings stand out is that he takes them seriously. He handles them with the same attention to detail accorded other wines that command prices three or four times higher.

INDEED, for the consumer, another lure of quality chenin blanc is its price. Dry Creek’s 1998 vintage carries an SRP of $8.75. Another outstanding maker, Alexander Valley Vineyards, asks just two bits more for its 1997 rendition. Purchase by the case, and the customary 15 percent discount offered at the wineries makes either wine a strong candidate for one’s “house white.”

When it comes to California chenin blanc, the names that tend to get the most press are Chappellet, Chalone, and Ventana. Dry Creek unquestionably deserves to be in the same strata, with Alexander Valley perhaps one notch below. Other California wineries that take chenin blanc seriously include Durney, Husch, Pine Ridge, and Mirassou.

While chenin blanc can be made dry, off-dry. or sweet, the most memorable versions are dry, floral, and fruity. They’re also versatile, making palate-pleasing companions to fish and chicken dishes, as well as refreshing aperitifs.

In the early ’70s, David Stare raised the eyebrows but ultimately garnered the respect of old-time county farmers when he decided to buck the trends of the day, uproot a productive and profitable prune orchard, and plant grapevines. Similarly, Alexander Valley Vineyards’ Hank Wetzel has gained a reputation for making wines true to their varietal and geographic character.

Respect can’t be bought; it must be earned. Any Davis or Fresno grad can forge a reputation with the right cabernet grapes, but it takes a true pro, a consummate vintner, to gain acclaim via chenin blanc.

This reality may not be fair, but as Walter Cronkite–a journalist who knows a thing or two about respect–would say, that’s the way it is.