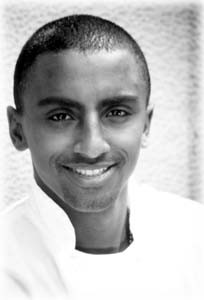 Man with a Plan: Chef Marcus Samuelsson mapped out his road to success.

PATRICK CLARK is one. A nationally known chef, Clark turned down a job few could refuse: cooking in the kitchen of that building known simply as the White House. The reason? New York’s renowned Tavern on the Green restaurant had made him a better offer.

Marcus Samuelsson is also one. Orphaned at the age of 3 when a tuberculosis epidemic swept through his Ethiopian homeland, Samuelsson and his younger sister were adopted into a Swedish home. At age 26, Samuelsson is now the executive chef and co-owner of Manhattan’s Aquavit restaurant, a three-star establishment that serves Scandinavian food and is known as one of the top 10 restaurants in the city.

What least concerns these professionals is some commonality of skin tone. What they definitely share is the distinction of being among the most respected chefs in the country.

Santa Rosa chef Bea Beasley gives a short laugh. “For 400 years,” she says, “blacks have been cooking. It’s just now in the ’90s that we’ve started hearing about these chefs and they’ve started to get key positions in places other than in hotels and country clubs, which is historically where they’ve been tucked away.”

As they have for the past three years, the 100 Black Men chapter of Sonoma County honors top black chefs–such as past winners Clark and Beasley–with a dinner and auction to raise funds for its scholarship and mentorship campaigns. Honoring Samuelsson as well as Capistrano Depot restaurant chef/owner Dennis Burrage and Wayne Gibson of Rhode Island’s Castle Hill Inn, this year’s dinner is slated for Aug. 23.

AFTER THREE ROUNDS of phone tag with a publicist, one aborted call to New York (“Chef is not taking calls at this time”), and a rescheduled appointment, Chef Samuelsson finally has time to talk. Nominated this year for a prestigious James Beard award, Samuelsson is as hot as a searing pan these days, and the screening surrounding him reminds the reporter of trying to secure an interview with a rock star. He normally does four such media events a week.

Which only makes sense, because in today’s restaurant scene the personality behind the stove is almost as important as the food produced.

“I look into other entertainers very often to get inspiration,” Samuelsson accedes, his English superbly punctuated by a slight Scandinavian accent. “I’m interested in how they keep ahold of the whole PR machinery, and what made someone like Michael Jordan [go] from being a basketball player into an icon.

“In America, it’s suddenly hip to be a chef,” he says. “We’ve gone from the hospitality business to being hospitality/entertaining. It started with theme restaurants. Even fine dining rooms in a restaurants such as ours–we now have to think about four elements to being a nice dining experience.

“What the Hard Rock Cafe has,” he says, citing that franchise as an example, “is beer, burgers, music, and high-tech decor. What we have is four different elements: we have to have service, food, decor, and entertainment. In Europe, eating has always been about food, maybe wine. If you can get the two together, great. If the service clicks, that’s three out of four. But now here in America, the revolution is that you have to have a tight concept. That’s the only way to survive in a competitive society.

“Now, everything is a story,” he continues. “Chefs have bios. There’s nothing that is bad about it, it’s great. But it’s not just about being a chef and cooking, you’ve got to spread the word, and be a personality. I think that’s fantastic. And Americans are friendly, they’re the nicest people in the world. I mean, in Europe, no one would have the guts to come up and say ‘I read your story, and I thought that it was fantastic.’ That’s when you get into the realm of entertaining. If you can’t pick up on that and answer their questions, then I don’t think that you belong in this business.”

Young, brash, and determined to succeed, Samuelsson decided upon a career in the kitchen when he was 16, fed by years at his grandmother’s side learning the Northern arts of preparing seafood and game, as well as pickling and preserving. Together, he and his father mapped out a plan as strenuously ambitious as would be followed by an aspiring doctor or attorney.

“Everything that I do is a reflection on my parents,” Samuelsson says straightforwardly. Culinary study in Switzerland was chosen to force the young man to learn to speak German and because the rigors of the program determined that if he didn’t shave, iron his own clothes, and arrive exactly on time for each lesson, he would be expelled.

He then studied in Austria to learn pastries, and in France for the language and classical technique. Three years of cooking on a Swedish luxury liner consolidated his skills. And when his mentor at Aquavit died suddenly, Samuelsson suddenly found himself, at the tender age of 25, as executive chef.

While Samuelsson is quick to point out that he is honored to be tapped by the 100 Black Men for the black chef award, he stints at terminology.

“I just don’t like the term ‘black chef.’ I’m a chef who happens to be black, and I think that we focus too much on color. I’m a great talent and whether I’m white, black, or Asian, my talent would come out. And I think that it’s such an old, tired topic to talk about. I just don’t have time for it.