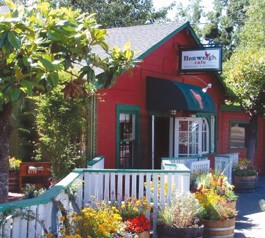 “Hey, look over there—it’s a Henweigh!” What’s a Henweigh, you ask? Only the new incarnation of the building on Gravenstein Highway formerly known as Stella’s, right next to Mom’s Apple Pie. In addition to being one of the few places around to serve fondue (cue Tijuana Brass music here), the Henweigh Cafe also has panini and barbecue. But the main night to go is Wednesday, when the place hosts $5 burger nights from 5pm to 8pm. And, yes, a hen weighs about four or five pounds. We’re just glad that scary dangling phone pole out front got fixed. . . .

The standard go-to fodder for broke-ass college students and fussy toddlers gets gussied up at Thumbprint Cellars’ Mac Off 2011. Part of the 19th annual Winter Wineland—a two-day soiree of wine, art and education in northern Sonoma County—this glorified food fight will showcase mac ‘n’ cheese concoctions from three local chefs. Ryan Tunheim, proprietor and chef of Taste of Perfection Catering and creator of Thumbprint’s wine and food pairing menus, cooks up a cheesy delight that he swears is beloved by his two-year-old daughter.

David Zimmerman of Stark’s Steakhouse in Santa Rosa will whip up something that appears to be the product of a middle-of-the-night drunken eating binge fantasy—yep, BLT mac and cheese. Chef Scott Kendall, owner of Carpe Diem Wine Bar in Napa, will bring the heat with something he calls “Quack and Cheese,” which sounds a bit terrifying and hopefully involves cooked duck and not bad doctors. After filling up with queso delights, enjoy limited production wines, winemaker chats, tours, art and educational displays at the many wineries offering events during the Winter Wineland. Ticket price includes winetasting for the weekend at all participating wineries. Get your mac on Saturday and Sunday, Jan. 15&–16, at Thumbprint Cellars. 102 Matheson Street, Healdsburg. 11am&–4pm. $35&–$55. 707.433.2393.

Bohemian.com
Previous articleMunch Mondays: A Ridiculous Success
Next articleJan. 12-19: Across the Bridge