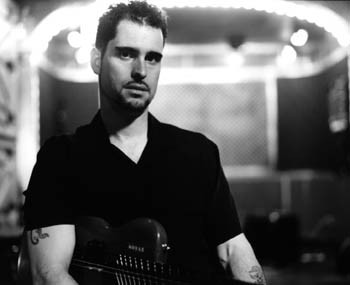 I think all musicians are on a mission–at least the real dedicated ones are on a journey,” says jazzman Charlie Hunter, 32, who, when onstage, sports an eight-string guitar and a wry smirk that hints he is harboring some deep secret. “I mean, I don’t want to get all hippy-dippy, but the goal is to reach the spiritual center of whatever music you’re searching for. In that search, for me, it’s real important to bring in other people and to have it be a real honest scene in which the audience is also part of the music. So it’s now, it’s happening now!”

True to his word, Hunter’s latest album, Songs from the Analog Playground (Blue Note), is a mesmerizing mix of mainstream jazz and rock fusion, with Latin, African, Asian, and New Orleans influences. And for the first time, vocalists are brought into the mix.

The contributing singers are Theryl de Clouet from New Orleans jazz-funk band Galactic, rapper Mos Def, Kurt Elling, and Norah Jones, daughter of Indian sitar master Ravi Shankar (and a pop-jazz phenom in her own right), who on the album performs Roxy Music’s “More Than This” and the show-stealing closer “Day Is Done” by Nick Drake. Hunter returns Oct. 25 to the Mystic Theatre in Petaluma.

The new album has drawn rave reviews and bolstered Hunter’s growing reputation as one of the leaders of a burgeoning, pop-influenced hybrid sound that is turning Gen-Xers on to improvised music. Yet Hunter, a Berkeley native who honed his jazz chops a decade ago at the Up & Down Club in San Francisco, is reluctant to stake his claim beside such innovative jazz players as saxophonist Steve Coleman, avant-garde bandleader Peter Apfelbaum (who contributes to the new album), or the downtown denizens of New York’s celebrated Knitting Factory who are helping to reinvent improvisational jazz.

“Peter [Apfelbaum] is way ahead of me–miles and miles and miles ahead,” Hunter says modestly. “I’d say that the only people who are really doing what we’re doing are [the New York-based keyboard combo] Medeski, Martin, and Wood, and they’ve been doing it longer, taking improvised music to the people.”

As for his own innovative sound, Hunter laughs,”It’s jazz music of some kind. It will all be changing in time, because I’ll be changing over time.”

That may sound coy, but Hunter wants to thwart those who lump him in with the acid-jazz movement or whatever flavor-of-the-month is in vogue. “Well, that whole acid-jazz thing is going to wear thin pretty soon, and it’s never really applied to us,” explains Hunter, who prefers to call his groove “antacid jazz.”

And then there’s that alt-rock thing. Hunter spent the late ’80s playing guitar for the agit-rap group Disposable Heroes of Hiphoprisy, but found the experience musically unrewarding. But his own jazz group have appeared on the Lollapalooza alternative music stage and routinely play at rock clubs. A few years back, Hunter contributed a track to Primus chief Les Claypool’s first solo album.

In his spare time, Hunter has dabbled in a side project, a jazz and soul tribute band signed to Warner Brothers called T. J. Kirk. But it was his eagerness to cover grunge songs that helped tie him to the flannel-shirt-and-pierced-nose set.

“I think that because we covered a Kurt Cobain song on the first Blue Note record, people have decided that we’re really into alternative rock. Actually, Nirvana is probably the only alt-rock band that I know,” he adds with a laugh, “but Cobain was a really good songwriter.”

Does he identify with the Alternative Nation? “Yeah, I think our music is an alternative to the suit-and-tie club that says you have to be well-to-do and super intellectual to understand jazz music,” he responds. “We don’t have that attitude. We play at places where people aren’t interested in pigeonholing instrumental music.”

So don’t look for Hunter among the stylish, Italian-suited retro pack epitomized by Wynton Marsalis and the so-called young jazz lions. “That’s just not where I’m at,” he says. “I feel a real urgency in life and that’s reflected in my music. It’s my only creative outlet. It’s the only avenue I have to scream about my life and what’s happening in other people’s worlds. It’s my fail-safe antidote to the world.”