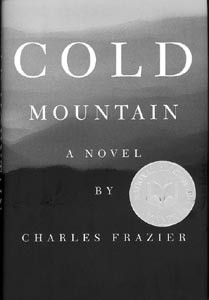 IT IS THE SUMMER of 1864, and a Confederate soldier is in a military hospital in northern Virginia. His war wounds have healed sufficiently for him to stare longingly out the window, gathering his strength and courage to begin his journey, alone and on foot, to his home at Cold Mountain, high in the Blue Ridge Mountains of North Carolina.

Thus begins one of modern literature’s epic journeys, one that has precedence in tales by Homer, Dante, Joyce, Melville, and myriad others of the hard road toward home.

Charles Frazier has crafted a convincingly lyric story that has catapulted Cold Mountain (Atlantic Monthly Press; $13; newly released in paperback) to the heights of the bestseller lists. For once, here is a popular book that deserves all the dedication and readership it gets.

Frazier tells two tales here. One is of Inman, the disillusioned soldier and his travails; the other is of Ada, the genteel and educated young woman back home who is struggling to survive and make do in a war-ravaged South.

Like Penelope, Ada does not waste her time pining away. She learns, with the help of her young friend Ruby, how to manage the farm: planting and harvesting crops; raising and butchering animals; bartering for trade goods.

The book is equally about the wandering soldier and the maturity and awakening of a belle confronted with the harsh realities of her time and situation.

The lyrical beauty of the book is Frazier’s ability to vividly convey geography, time of day, mood, weather, the natural world, characters, and the slow shift of seasons without allowing the eloquence of his language to obstruct the view. Inman approaches a fellow resident in the hospital:

“The blind man was square and solid in shoulder and hip, and his britches were cinched at the waist with a great leather belt, wide as a razor strop. …

“He sat with his head tipped down and appeared to be somewhat in a muse, but he raised up as Inman approached, like he was really looking. His eyelids, though, were dead as shoe leather and were sunken into puckered cups where his eyeballs had been.”

FRAZIER USES the vernacular and the objects of rural mid-19th-century America to great effect. He has lovingly re-created the feel of the era–no small feat–so that the reader steps assuredly and completely into the book, and into the imaginative world that great novels have always evoked.

The large facts and the small details of the book ring true.

The sometime violent scenes have the feel of events as they happen, and the affection one feels for the two main characters can be created only by an artist who has convincingly conveyed the recognizable humanity of his people.

We care about Inman and Ada, and we worry about them, just as we do about people we know, except that the arc of their fictional lives lies before us in a few pages.

I approached the denouement of the novel with trepidation, not even sure I truly wanted to know what becomes of them, but ultimately unable to resist the hard tug of the story.

This novel of return should become a classic. It is an astonishingly sure-footed first novel. It also creates the kind of psychic disturbances of which great works of art are capable. It confronts war without being didactic, just as it eases toward love without becoming sentimental.

It is a novel that has stayed with me since I read it, one that demands attention.

Cold Mountain is a work of historical fiction that helps restore that somewhat rusty art form, just as it does the idea that a story with a beginning, middle, and end–a linear novel–can, when well told, still be a powerful hermetic experience, one that needs no deconstruction.