My First Sting: Fighting crime--one soda drinker at a time 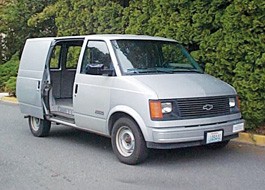 This summer has been all about reading genre pulp novels. Though I had high hopes of reading The Origin of Species and Italo Calvino, it just isn’t going to happen. You see, it’s too hot to think. Plus, I have access to a library, and there I’ve found the science fiction of Octavia Butler, the delicious worlds of Philip K. Dick and the king of them all–Raymond Chandler, and his rough and tumble private detective, Marlowe.

I’m the cops reporter at a little newspaper, so I will now and then slip into Chandler speak, especially when I’ve got a sting operation to report on.

It was about 6pm on the appointed day, cloudless sky in July. I wore a white linen suit. Triumph belt buckle, turquoise clogs. It was a hot day, but I don’t sweat. I had a meeting downtown at the cop shop. His name was Cpl. Allen, never met him before and wanted to keep it that way. But he had a carrot for me: a sting operation. That’s the kind of thing a journalist dreams of–a ride along with a wired undercover agent.

Before we went out, we had a quick meeting. Diagrams on the chalkboard about locales, who would ride with whom. The UC was a straight-haired girl, sweating bullets, sitting in the back. A Mormon girl, nineteen and ready to rid the world of crime.

“Why would you do this?” I asked, figured she might be working off some public service hours.

“Because these people are breaking the law,” she said with doe eyes. Dangerous.

Allen tossed on his a bullet-resistant jacket and a black, square hat, and yelled, “Let’s go make some arrests!” And we all ran outside. Well, except me, I sauntered out.

But where was the cop shark? That black-and-white killer whale with the security screen? Part of the appeal of a police ride-along is actually getting to be in a vehicle where real criminals once sat. Or better yet, a stealthy yet shiny, black van with bubble windows. Now that would be a proper sting operation vehicle à la Law and Order. These are the police vehicles I’m used to–the ones I would have expected. I had forgotten I was in Idaho.

Because today we would be crammed into an old Astrovan. A kind of dirty Astrovan with empty cans of Mountain Dew in the beverage holders.

Cpl. Allen, in full swat regalia, sat in the passenger seat, some big oaf driving, and we all piled into the back–yes, through the sliding door. “I had to borrow this from my kid,” Allen explained, looking back at us with bug eyes. I was sitting next to the camera guy from Channel 6. He smelled like Polo.

And then we were off to the mini-mart. The UC rode with her foxy boyfriend and his even foxier white Harley. He reminded me of Prince.

For some reason we had to keep the van idling the whole time we watched the UC try to buy alcohol from unsuspecting sleaze bags. For three hours. Because I was in the car, we didn’t talk about women, which I’m pretty sure they would’ve fallen into. Instead we talked guns, and tried to guess which person would be our first bust.

“Hello! There’s our guy,” Allen would mumble, staring at a rusted-out Chevy Nova with a muscle-T-shirt-wearing driver. In he went. We held our breath. Out he walked–with a can of Dr. Pepper. Because of some entrapment laws or something, our UC couldn’t ask anyone for alcohol; they had to be carrying a six-pack. And when they did sell to her, the cops were ready to jump out of the Astrovan and arrest the guy (or gal).

The worst thing I saw on our three-hour “sting operation” was a family of four in an SUV. Mom, dad, brother, sister–all clutching those giant 64-ounce neon-green soda containers. In they went, quietly poisoning themselves with Mountain Dew. The little girl was so small she had to hold the container with two hands. The entire family was morbidly obese.

“Can’t you arrest them?” I said, as they piled back into their oversized vehicle.