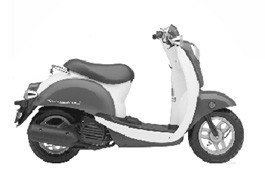 Scooter Bug: Everyone's riding scooters--and not only to save fuel

Meat sizzling on the barbecue, bottle rockets zinging and Harley’s rumbling–these are the sounds of summer. But there’s a new noise echoing in cities and small towns throughout the land: the high-pitched whir of motor scooters. These twee little two-wheelers are taking America by storm.

Now, I’m not talking about Vespas, the gorgeous Italian pieces of artwork that hip kids drive around to art shows. I’m talking Yamaha Vinos (made in Japan, thank you very much) and Honda Metropolitans that shuttle regular old folk to their boring, thankless jobs day in and day out.

The other day, I chased down an elderly man riding a cobalt-blue scooter and matching helmet. He was so cute! I saw him on the road, did a U-turn and stalked him like prey. We made some left turns, some right turns, until finally we ended up at the probation office. Yes, his place of work. Turns out his name is Joe Love, and he just bought his 2006 125 cc Yamaha Vino last month.

Love bought the scooter a month ago, and so far it’s been quite an attention-getter. “People constantly ask me questions while at a stoplight,” Love says. “They ask me how my fuel mileage is, how much it cost.” Love is a motorcycle rider also, but buying a new scooter was more economical for him than a new motorcycle–he spent under $3,000.

Technically, scooters are motorcycles–in most states, you need a motorcycle endorsement, insurance and a helmet to legally operate a scooter–but they distinguish themselves with their automatic transmissions, small wheels and step-through design. Also, their engines are smaller, and therein lie their genius, namely, fuel mileage. Love estimated that he gets about 70 mpg, and other riders have reported up to 100 mpg. Repeat, 100 mpg.

Mike Murdock, manager of an East Bay motorcycle shop with a candy-colored display of scooters in its window, has noticed “a slight increase in sales, and a high increase in interest.” His lineup includes the Honda Metropolitan and Ruckus scooters.

The Mets look like the original Italian scooter, the Vespa, first made popular Europe in the 1950s. Colors range from a subtle, classic cream and navy blue or red to bright geometric patterns. The Ruckus resembles a Hummer melted into the mold of a scooter, with its military styling and chunky look.

Murdock says that people usually consider getting a scooter because of the high cost of gas. “Which I think is the wrong reason,” Murdock says, “because these are so much fun.”

Look at them–weaving through traffic, beeping their little horns and meeting each other in social situations like scooter rallies–they sure are appealing.

And they aren’t just for kids anymore. According to trade group the Motorcycle Industry Council, 2005 was a record year for scooter sales; an estimated 113,000 units were sold last year, double that of 2001, and almost 10 times as many as in 1997. The demographic of the rider has shifted, too; in 1990, scooter owners were most often single students. Increasingly, scooter riders are middle-aged, married and with an annual income of $48,000. The median age, according to the trade group’s statistics? Forty-six years old! In 1990, it was 26 years old.

My theory for this shift is that older folks, like Mr. Love, are not only hoping to save a few bucks by driving the scooters to work, they also want a toy. Good for them! People are going to live to be, like, 120 or something, so they better find a hobby like scootering.

However, I do worry a little about these older folks whizzing around, someone can get hurt. Love hears that. He thinks there is an element of danger involved. “People don’t see bikes and scooters, it’s like they have tunnel vision,” Love says. “They’ll run you over if you don’t get out of the way.”