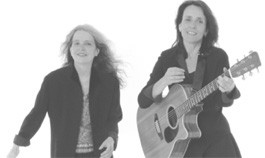 Prepare to be shocked. There are other places in this world, places that lie beyond the borders of the North Bay, where good and desirable things actually do exist. They are called “music festivals,” and every year thousands of folks travel away from home to attend them.

Three of the better ones within somewhat easy reach (meaning that you can get there in less than a day’s drive) are the Kate Wolf Memorial Music Festival in Laytonville (June 23-25), the Wild Iris Folk Festival in Boonville (last weekend) and the near-mythic, twice-a-year Strawberry Music Festival at Camp Mather in Yosemite (Memorial Day and Labor Day weekends). Both of this year’s Strawberry festivals are, as of this moment, completely sold-out, and the 13-year-old Wild Iris–sort of the beloved but struggling little sister of music festivals–went away forever after its final outing in early June.

We will therefore focus our attention on the Kate Wolf Memorial Music Festival, about to celebrate its 10th anniversary. Named for the sainted late folksinger Kate Wolf, who died in 1986, the festival began with a memorial concert organized specifically to sing and to celebrate Wolf’s own songs and music, but has developed into something much a bigger: a celebration of the spirit of folk music that Wolf did so much to foster. Like Strawberry, it draws a combination of those who like to sit and listen to good music, those who seek out groups of musicians with whom to jam before and after the musical sets, and combinations thereof.

Singer-songwriter Peter Tracy and his wife Marcia Ford of Santa Rosa are perfect examples. They’ve attended frequently since the festival began, as it has built a name for attracting some of the best folk musicians in the world, on and off the various open-air stages. This year, the massive lineup includes Bruce Cockburn, Steve Earle, Arlo Guthrie, the Tim O’Brien Band, Utah Phillips, the Roches, Greg Brown and Rosalie Sorrels, and a whole lot of others.

“What I have liked about the Kate Wolf Festival from the start,” Tracy says, “is that you can see really great performers up close, and you can also see a lot of new performers, up-and-comers and interesting people you wouldn’t usually see. Compared to somewhere like Strawberry, where you can be in the middle of tens of thousands of people, the Kate Wolf Festival is really intimate. There’s a real pleasant vibe there. It’s a very mellow festival.”

The other thing Tracy values about the Kate Wolf Festival is its political tone.

“The whole vibe of the festival is incredibly political and very progressive,” he says with a laugh. “You don’t find that at Strawberry. Last year, I really appreciated the overt political awareness that the performers had. They were not afraid to show it or say what was on their mind.”

Primarily, it’s the world-class performances that appeal to Marcia Ford, who does not play an instrument and spends her spare festival time looking for a shady spot in which to curl up with a good book.

“It does tend to be hot during the day,” says Ford. “But I really enjoy listening to the music with other people who care about the same kind of music, the same kind of issues. It’s sort of a big, loose community. For me, that community feeling is what a good music festival is all about.”