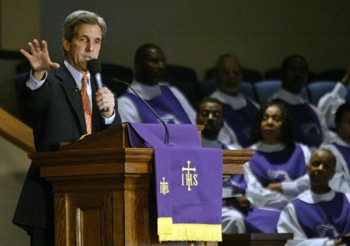 Columbus Congregation: John Kerry campaigned hard in Ohio, but will he ensure all the votes are counted?

The campaign of Green Party candidate David Cobb has raised enough money to demand a recount of the presidential election results in Ohio, a party spokesperson said Monday. While it’s unclear if a recount will result in a Kerry victory, it’s likely to highlight many flaws in Ohio elections that may have tilted results toward Republicans and against Democrats.

Efforts to launch an official statewide recount got underway in earnest last week when Common Cause of Ohio and the Alliance for Democracy, a progressive coalition, announced they were initiating a recount campaign for Ohio. Attorney Cliff Arnebeck, who represents both groups, said both the Green Party and Libertarian Party presidential candidates would seek a recount if the $110,000 filing fee could be raised. “Common Cause and the Alliance for Democracy are not partisan. The purpose of the recount is to verify the honesty of the process,” Arnebeck said. “That is in the interest of anyone who would be declared the winner.”

As this issue was going to press, the Green Party announced that it had raised $150,000 over the weekend, mostly from donations in the $10 to $50 range. The party plans to officially file for the recount and immediately begin training volunteers to help with the effort. A coalition of progressive groups held a public hearing on election abuses last Saturday in Columbus calling on the Kerry campaign to pay for the recount. Meanwhile, they have created a web page to collect donations at the Alliance for Democracy site.

While there have been many accounts of problems associated with the Ohio vote–from reports of 90,000 spoiled ballots, to software glitches resulting in more votes tallied than the number of registered voters, to new voters not being notified where their polling places were, to too few voting machines in Democratic strongholds–the only legal process that could immediately address some of these concerns is a recount.

The recount would be just that: a recounting of all the votes cast. If the results change, meaning more votes are added to Kerry’s total, then the official result, what the secretary of state certifies, is changed. “It’s recertified,” Arnebeck said. “If Kerry emerges victorious, he’s president.” Of course, a certification in Kerry’s favor for Ohio won’t take away the fact that Bush won the popular vote by 3.5 million votes.

In coming days, the Ohio secretary of state is expected to announce that the provisional ballots have been counted. A losing candidate then has five days to request a recount, filing the paperwork and filing fee. That cost is $10 per precinct, which comes to slightly more than $110,000. There is a possibility that not all Ohio counties will finish the provisional ballot count, which would prompt those seeking the recount to pursue other actions, Arnebeck said.

In Florida in 2000, before the Supreme Court interceded in the election outcome, there was no statewide recount conducted. A coalition of newspapers later analyzed the vote, in essence, doing their own recount. They found Al Gore had won. That result was spun by those defending George W. Bush, however, saying that the smaller number of counties where Gore wanted a recount would not have made Gore president.

There are three new areas where votes can come from in Ohio: absentee ballots, provisional ballots and computer errors. Arnebeck said he has evidence how in one rural county more computer votes were counted than there were registered voters, an issue that has been referred to the FBI. Provisional ballots are also thought to favor Kerry and Ohio Republican Secretary of State Ken Blackwell has issued orders to disqualify provisional ballots if the voter did not enter their dates of birth. A supposedly mechanical process already has become political.

However, questions such as what happened to people who did not vote because they never received notifications after registering by mail or because of too few voting machines in their precincts, may not get addressed.

In Franklin County, where Columbus is located, for example, there was a clear pattern of a shortage of voting machines in Democratic inner city precincts, where new registrations skyrocketed, compared to the more middle-class white, GOP-dominated suburbs. Deliberately putting too few machines would violate the national Voting Rights Act. But that’s hard to prove–especially because the county’s election supervisor has said all the local boards are bipartisan. On the other hand, Ohio activists point out that people with longtime GOP ties supervised the county’s election.

Still, there are many things that a recount could yield–apart from the possibility of Kerry victory. Kerry’s concession preempted a plausible explanation of what actually happened on Election Day in Ohio.

“Many people are saying, ‘Why bother to do this?’ The answer is we have not gathered all the facts,” Arnebeck said. “Until you recount the votes, and look at the possibility of a sophisticated computer fix, you cannot draw conclusions. Whatever it costs to properly analyze this is nothing in terms of enabling the country to move forward. They just have to raise the money to officially file the recount request. The case is ready.”