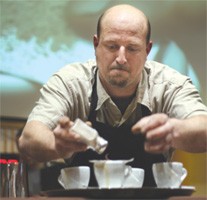 Greg Grabow wasn’t an underdog in the Western Regional Barista Competition (WRBC) until a pear actually leaped out of his blender. Later, he clarified that it actually wasn’t even his blender.

On St. Patrick’s Day–the second of the three-day event–Grabow and 28 other contestants from California gathered at the Petaluma Sheraton to compete with coffee. The winner automatically qualifies for a slot in the semifinals at the U.S. Barista Championship in Long Beach, and eventually the top barista from each participating country will duke it out at the eighth annual World Barista Championships scheduled for Tokyo this summer. Ethiopia is one of the newest countries to join this international mocha melee.

The WRBC had taken over the hotel’s Blue Heron Ballroom, and the atmosphere inside was charged. Of course, everyone was amped up on caffeine, distributed at the back of the room by independent coffee companies pulling free shots for the masses on “the fourth machine.” This was an extra La Marzocco FB80, identical to the three espresso machines used in competition, but solely dedicated to keeping the audience buzzed.

Baristas and those who came to support them, paparazzi, journalists and spectators formed a line along the back perimeter of the ballroom and waited patiently for their espressos and cappuccinos; the line reminded one of enthusiastic parishioners falling in to take communion. Throughout the weekend, the queue stayed strong as attendees went back multiple times.

The legions of baristas in attendance sported enough tattoos to wallpaper a small cafe. The ink patterned their pasty skin, made paler by ubiquitous jet-black hair. From time to time, these young baristas took breaks, sprawling on the sidewalk outside like deep-sea creatures exposed to the sun for the first time.

It was amid this coffee-crazed atmosphere that Grabow, a roaster at Barking Dog in Sonoma, took his place as contestant number 28 behind one of three coffee bars at the front of the room. In a nod to the growing popularity of barista competitions as a bona fide, if burgeoning, spectator sport, video of each competitor’s presentation was simultaneously projected onto a large movie screen. In previous years, the competition had been compared to watching someone do her taxes.

Grabow, like his peers, would prepare 12 drinks–espresso, cappuccino and a signature drink of his own devising–for each of four sensory judges (technical judges are also present but don’t taste) and in just 15 minutes. Like the floor routines in Olympic gymnastics, the competition is set to music of the contestant’s choice. Grabow, who had rehearsed his verbal presentation while making bean deliveries out of his Subaru hatchback, introduced the spectators and judges to his musical choice from the Dreamgirls soundtrack. “I might be white,” he told the judges and the audience, “but I’ve still got some soul.” The audience responded favorably, and he was off to a good start.

In practice sessions, he had tried adding cilantro, but found that it was too pungent. Trying to come up with a better recipe, the answer finally came to him one night. “I literally had a dream about one of my co-workers telling me that I should use a pear or an apple,” he said afterwards. He liked the results. Thus, the pear frappacato was born.

But during competition, while pouring the frappacato from the blender into the last of the four glasses, Grabow suffered a major spill.

Later he described what happened. “The pear flew out of the pitcher,” he said, pausing after each word as if trying to wrap his mind around the unforeseen phenomenon. Then, he giggled hysterically. The judges, who award points on everything from flavor to presentation, would surely dock points for a frappacato-covered pear making its way onto the bar.

It was an unfortunate turn of events for Grabow, who had been perfecting the frappacato for three weeks. Daily, he had visited Sonoma thrift stores in search of appropriate glassware; among other things, contestants must supply their own cups, saucers and coffee beans. If he was a bit frazzled during competition, it might have been because he’d lost his keys that morning among all those extra sets of glassware (which he termed “understudies”).

Prior to his coffee career, Grabow spent 20 years as a musical theater actor in San Francisco. The experience steadied him on Saturday, and when the pear went flying, horror registered on his face for just an instant. “My nerves of steel served me well today,” he said, noting that he’s had props fall and people accidentally drop him onstage before. “But it’s very nerve-wracking, especially when you’re doing work with your hands. Because when you’re singing and acting onstage, you can shake. It’s OK to shake–people are sitting 20 feet away from you. As long as you can hit the high notes, there are no problems. When you’re serving to four people and you’re shaking when you’re setting the drinks down, you watch your rosette go from a rosette to a blob of white foam.” It had taken Grabow months to master the rosette, now his favored cappuccino artwork.

Later that evening, the six finalists were announced. Grabow wasn’t one of them, but he didn’t seem to mind. Not everyone took the news so evenly; just after the announcement, sobbing was heard in the women’s bathroom.

On day three, the audience spilled over the chairs into the flanks of the ballroom, and the lineup for free coffee from the fourth machine had grown. Grabow and many of the other baristas who hadn’t made it into the finals had come to watch. In between competitors, the emcee joked that the coffee paparazzi had become a problem. Could they please stand at least 10 feet away from the contestants? It wasn’t likely.

Of the six remaining candidates, only two were from the Bay Area: Chris Baca and Crystal Yeaw both represented Ritual Coffee Roasters in San Francisco. Coffee Klatch in San Dimas had sent two contenders, including the owner’s daughter, Heather Perry, who had won the U.S. Barista Championship in 2003 and was back at the WRBC hoping to win it for the fourth year in a row. Los Angeles barista Eton Tsuno was also back again after taking home third last year, and WRBC newcomer Kyle Glanville of Intelligentsia seemed to have a good shot, given his company’s reputation in the industry. Though Chicago-based, Intelligentsia’s first West Coast store is slated to open in Los Angeles in the coming months.

Unlike the day before, the WRBC finalist competition was highly polished, right down to Perry’s French manicure looming large on the projection screen.

Tsuno’s miso-flavored umami espresso was the most unusual of the signature drinks, and his disarmingly carefree personality seemed like it might win over the judges. By contrast, Perry’s performance was slick, although her signature drink, which involved creating a “faux crema” by pulling an espresso shot over a mixture of raw egg and brown sugar and then floating it atop a “cloud” of citrus-zested cream, seemed divine. Kyle Glanville’s Mineola tangelo and cream reduction with espresso also seemed like it could be a winner. It was anybody’s guess.

The announcement of winner was late, because, the audience was told, the scores were so close that the judges had to re-tally all the scores. In the end, Perry won it again. She beat out Glanville by a mere 2.5 points out of 1,000. The difference reportedly came down to spillage. Although there had been no flying pears in this round, both contestants had spilled some liquid, and apparently, the judges determined that Glanville’s spill was slightly more egregious.

“In a coffee competition that is similar to the Olympics, every photo finish opportunity counts,” said Grabow afterwards. “One does the best they can and lets the grounds fall where they will.”