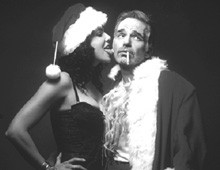 Herewith your holiday film organizer with a brain, if not a heart

What is this thing called buzz? Is it strobing vision, caused by the slightly off-register photo of a celeb on a magazine cover? Is “buzz” the drone of a publicist’s voice, caught in the flytrap of my voicemail? (“Your readers will be interested in . . .”) Or is buzz really just the shriek of some telephone screamer in some far-off Manhattan or L.A. office–a shrill cry, distorted by distance, to the insistent whine of a dentist’s drill?

Imagine a world without buzz. Please think of the below not as adding to buzz, but as a mere schedule for informational purposes.

First, Christmas. Think of it: disorientation, panic, crowds, darkness–except for a discernable lack of heat, the holiday season boasts many of the most noteworthy features of Hell. The mold was not yet on the jack-o’-lantern before ‘The Santa Clause 3: The Escape Clause’ started its annual catastrophe. (In legalese, an “escape clause” means something that excuses a promisor from failure to meet the contract’s terms. Can’t say you weren’t warned by the title.)

Meaner and doubtlessly more fun is ‘Bad Santa: The Director’s Cut’ at the Smith Rafael Film Center on Dec. 16, with director Terry Zwigoff in attendance. Also comes the remake of Bob Clark’s other famous Yuletide movie besides A Christmas Story, ‘Black Christmas’ (Dec. 25), which revisits the 1974 film’s time-honored approach of pitting a foaming maniac against a houseful of sorority sisters.

Winter cinema packs a flurry of emotional donkey-punches. The most furious seems to be ‘The Pursuit of Happyness’ (Dec. 15), with Will Smith as a homeless but honest dad in San Francisco, tending to his young son while living in a shelter. Tears of some sort–if not the ones proverbially shed for answered prayers–may be unleashed by ‘Rocky Balboa’ (Dec. 22). Even at his age, Rocky may live to fight another day.

But what’s sadder than athletes dying young, as in ‘We Are Marshall’ (Dec. 22)? Answer: the plight of our vets, as exemplified in ‘Home of the Brave’ (Dec. 15), in which Samuel L. Jackson, Jessica Biel and 50 Cent separately recover from Iraq-trauma. Disinterring ‘Bobby’ (Kennedy, that is) at Thanksgiving–well, that’s sad, certainly. But it takes a talking pig to make some of us really bawl. ‘Charlotte’s Web’ opens Dec 20. There were those who required intravenous fluids after seeing Babe, and this promises to be just as dehydrating. Julia Roberts voices a commonsensical Charlotte and Steve Buscemi is Templeton the rat, the salt on the film’s tale.

As Dickens describes him, the Ghost of Christmas Present is known for rich robes, smoking roasts and roaring fireplaces. Maybe he’s the spirit of the cinematic cataclysm, too, and movies about civilizations put to the torch are ever so popular at the butt end of the year. Thus we tremble before ‘Apocalypto’ (Dec. 8), Mel Gibson’s Mesoamerican twilight of the Gods; ‘Eragon’ (Dec. 15), which intends to take up where Lord of the Rings left off, replete with fireballs, swords and dragon-cam views of massed Dark Ages armies; and ‘Curse of the Yellow Flower’ (Dec. 22), Zhang Yimou’s latest ancient Chinese polychrome battle epic. ‘Children of Men’ (Dec. 25) is Alfonso Cuaron’s very well-produced science-fiction epic of societal breakdown in 2027, in which, at the behest of his ex-wife Julianne Moore, Clive Owen must escort earth’s last pregnant girl to safety.

The harder to classify films are perhaps even more interesting: ‘The Good German’ (Dec. 12) offers a love triangle of George Clooney, Tobey Maguire and Cate Blanchett, with our girl vamping Dietrich in Berlin, circa 1945. Shot in a particularly glorious-looking black and white, it’s a tribute to the Fritz Lang thriller. Bombed-out ruins, labyrinthine sewers and fog-shrouded but shiny Lockheed Elektras warming up on the runway–the ingredients are all there. More double-crossing and more Cate are found in ‘Notes on a Scandal’ (Dec. 25), based on Zoe Heller’s novel about a student/teacher romance, with Judi Dench getting to play a monster, Blanchett’s hard-faced, unwanted friend.

‘Dreamgirls’ (Dec. 25) is a musical about a girl-group awfully like the Supremes, with Beyoncé and Eddie Murphy singing through decades of music and fashion. ‘Little Children’ (out now and coming soon) is a witty but painful story of parenting in the Boston suburbs, with Kate Winslet as a mom who suddenly finds herself repeating the plot of Madame Bovary. It’s a huge improvement over Todd Field’s earlier film, the overpraised In the Bedroom. ‘The Painted Veil’ (Nov. 29) has Naomi Watts as the restless wife of a doctor (Edward Norton), who finds duty in the 1920s in the Far East during a cholera epidemic.

For those craving green fields and grazing sheep, ‘Miss Potter’ (Dec. 29) stars Renee Zellweger in the Beatrix Potter story. Scandalous times in Montmarte, opium and sexual experimentation will not be part of the bio-pic. (That would be Nov. 17’s ‘Fur,’ with Nicole Kidman as Diane Arbus in a fairy-tale version of the photographer’s life.) It turns out that Potter, when not water-coloring tender pictures of bunnies, fought the developers and polluters in her native and much beloved Lake District.

Since the next two months will be a fiesta of vainglorious acting and shameless Oscar-grub, ‘For Your Consideration’ (Nov. 17) will be a reprieve. Ensemble improviser Christopher Guest leads a cast of indie-film never-wases who are caught up in the awards machinery when their picture gets “buzz”–which in some cases, means a movie’s death rattle.