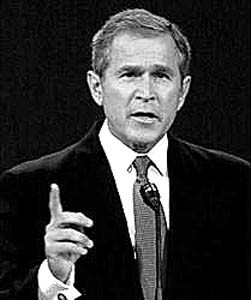 WELL, 101 DAYS into the Junta and the fear mongers are having a heyday, aren’t they? Even good liberals and Democrats have joined in the mantra. To listen to them, you’d think George W. Bush had opened the gates of hell and unleashed the legions of Satan upon the American people.

These good people actually believe that Jr. has given the go-ahead to put the arsenic back in the water, spew massive CO2 emissions into the air, tear up our national forests, and rape the Alaskan wilderness. With all the fury that has been whipped up, I’m sure any minute we’ll also hear that Baby Face Bush recently held up a 7-Eleven in Denver, and now plans to release bubonic plague into the atmosphere over Ohio.

Now, don’t get me wrong. There’s no doubt that this illegal squatter in the Oval Office is not to be trusted farther than you can throw Katherine Harris. But, please, let’s cut the crap and tell the truth: George W. Bush has done little more than continue the policies of the last eight years of the Clinton/Gore administration. As hard as that is for many to swallow, that is the truth–and the sooner you stop the scare campaign, the sooner we’ll be able to fight Bush in a way that will stop him for good.

On top of that, Clinton/Gore became the first administration in 20 years not to demand higher fuel efficiency standards from Detroit. Millions of barrels of oil that did not need to be refined and spewed out into our air were guzzled unnecessarily. It wasn’t that way under Reagan. His administration ordered that cars had to get more miles per gallon. Under Bush I, the standards were made even stricter. Under Clinton–zip. Nothing. How many more people will die from cancer, how much faster will global warming be sped up thanks to Bill and Al being in cahoots with one of their chief patrons, the top lobbyist for the Big 3 auto companies–Mr. Andrew Card, currently the chief of staff for the man occupying the federal land at 1600 Pennsylvania Avenue?

Am I the only one who remembers one of the most lavish inaugural parties thrown for Clinton after his election? The host: General Motors and its man-about-town in DC, Andrew Card.

YES, THERE IS a difference between the Democrats and the Republicans. The Democrats say one thing (“Save the planet!”), and then do another, quietly and behind the scenes with all the bastards who make this world a dirtier place. The Republicans just come right out and give the bastards a corner office in the West Wing. In some ways, maybe it’s better we see the evil out in the open rather than covered up in a liberal sheep’s clothing that seems to fool a lot of people.

Clinton waited until the final days of his presidency to suddenly sign a number of presidential decrees and regulations to improve our environment and create safer working conditions. It was the ultimate cynical move. Wait ’til the last 48 hours of your term to finally do the right thing so that your “legacy” will be improved. Every one of these regulations Bush has “overturned” was signed by Clinton in December and January. And that’s all he did–sign worthless pieces of paper.

Do you believe Clinton removed the arsenic from the water? Not only did he NOT do that, not only did he make us drink arsenic-laced water for the last eight years, this order he signed stipulated that the arsenic was not to be removed from the water “until 2004.” That’s right. Look it up. Clinton’s big environmental do-good act in the last minutes of his term guaranteed that we would be drinking the same levels of arsenic we’ve been drinking since 1942–the last time a real Democrat had the guts to stand up to the mining interests and reduce the levels of this poison. The Canadians and Europeans did it long ago. Clinton made it official that we would all be drinking arsenic during the entire Bush administration. Maybe he was doing us a favor.

And how about those CO2 emission regulations that Bush II overturned? Did I say “overturn?” Overturn what? All Bush did was maintain the Clinton status quo. He said, in essence, “I’m going to pollute the air at the very same levels Clinton did during his entire eight years, just as you are going to drink the same arsenic in the water under my watch as you did under Clinton’s.”

And, like the built-in three-year delay in his arsenic reductions, Clinton’s orders on the toxic emissions in his last days specified that they were not to be totally reduced ‘”until 2008, per the Kyoto agreement.” So, after violating the Kyoto accords he had signed by doing nothing about CO2 in the past few years, he then tries to look good by doing nothing about CO2 for another seven years! So the air that was dirty is still dirty and will remain dirty, just as Clinton had ordered.

THE LIST GOES ON and on. For eight years Clinton did nothing about carpal tunnel syndrome as it relates to OSHA regulations. Then, in the middle of pardoning some rich guys during his all-night kegger on Jan. 19, he decides to finally do some good for all those women who sit at keyboards all day and who, with their crippled hands, went to the polls twice to make him their president.

Friends, you are being misled and hoodwinked by a bunch of professional “liberals” who did nothing themselves for eight years to clean up these messes–and now all they can do is attack people like Ralph Nader who has devoted his entire life to every single one of these issues. What unmitigated gall! They blame Nader for giving us Bush? I blame them for being Bush! They suck off the same corporate teat and they support stuff like NAFTA, which, according to the Sierra Club, has doubled the pollution along the Mexican border where the American factories have moved. And then they wring their hands over Bush and his “reversals”! Where is Orwell when we need him? How much slicker can the doublespeak get?

Had Clinton done the job those of us who voted for him in 1992 expected him to do, we wouldn’t be in the pickle we’re in.

So spare me all the handwringing and indignant moralizing. Those who want to turn Bush into some sort of cartoon monster have an agenda–to keep most of us from seeing the beast that they themselves have become. Of course, they hate Nader. He’s an ugly reminder that they sold out a long time ago–and he didn’t. Blame Nader, blame Bush, it’s all part of the same distraction, to keep you from focusing on this one, very important fact: Republican arsenic or Democratic arsenic, it really is the same damn crap being forced down your throat.

Filmmaker and author Michael Moore is waiting for the party to get started.