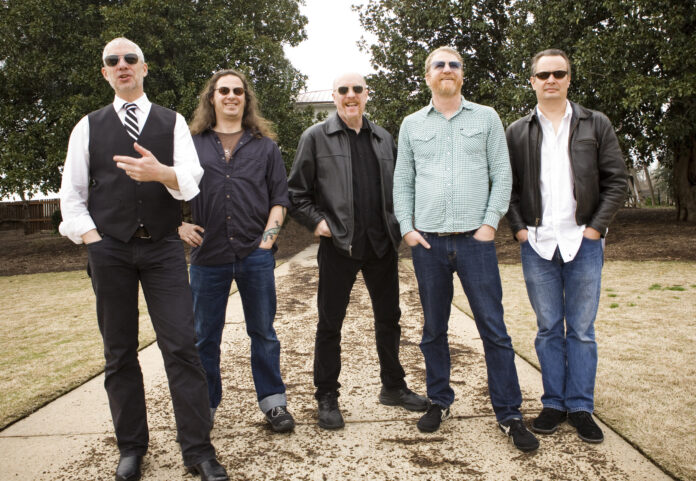 Could there be a better act to play the uniquely Northern California festival BottleRock than Santa Cruz’s own Camper Van Beethoven, with their conjoined twin band Cracker in tow?
After all, Camper is the group that on their 2013 album La Costa Perdida delivered “Northern California Girls,” perhaps the ultimate NorCal anthem—meaning an anthem that’s way too laid back to actually be an anthem.
“Right, it takes seven minutes to get where it’s going,” admits David Lowery, the frontman for both Camper and Cracker. “The drums come in a little bit like three times before they finally kick in about three-and-a-half minutes into the song.”
Lowery had already written his share of great California songs for both Camper and Cracker over the years—most recently, “Where Have Those Days Gone”—in which he mistakes Good Times’ astrologer Rob Brezsny for Thomas Pynchon in a bar in Mendocino County—but also “Big Dipper,” “Miss Santa Cruz County,” “Come On Darkness” and more.
But with his latest cycle, he’s outdone himself. While La Costa Perdida was a NorCal-influenced album, the songs on Camper’s latest, El Camino Real (which comes out June 3), are all set in, or otherwise related to, SoCal.
“We wrote these songs at the same time, then thematically we broke off most of the Northern California ones for the last album, and then kind of took these songs that were Southern California, and built another album around them, by adding another five songs or something like that,” says Lowery. “There’s kind of this opus going now, this theme going. There’s also a Cracker album, which comes out next year. It’s a double disc—one is Berkeley, one is Bakersfield. One is the punk side of the band, one is the country side.”
So, basically, four albums worth of California songs. And it all started because of…Joan Didion?
“I think it started with me and Victor [Krummenacher] and Jonathan [Segel] reading a bunch of Joan Didion,” confirms Lowery. He can’t remember which collection of essays specifically sparked it, but it would almost have to be the first section of Slouching Toward Bethlehem, in which Didion rips to shreds the “golden dream” of the Inland Empire—where Lowery, his Camper bandmates Krummenacher and Segel, and Cracker co-founder Johnny Hickman all grew up.
“Those essays really captured the feel of it. It’s not really that flattering about the area, but that’s sort of what people from the Inland Empire are proud of,” says Lowery. “There was actually some sort of referendum on a theme for the Inland Empire, like ‘Virginia is for Lovers’ or how California is the Golden State. And we all wrote in: ‘We will kick your ass.’”
The most noticeable difference between the two Camper albums is the overall feel—La Costa Perdida is more easygoing and gentle, while El Camino Real is darker and more intense, with a deep streak of paranoia that runs through songs like “The Ultimate Solution,” “It Was Like That When We Got Here” and “I Live In L.A.” Clearly, Lowery has very different views on the two halves of the state.
“Yeah, but I like ’em both,” says Lowey.
At the BottleRock festival in Napa May 30-June 1, Lowery’s bands will join an eclectic mix of five dozen other acts across four stages, including the Cure, OutKast, Weezer, LL Cool J, Robert Earl Keen, TV on the Radio and Smash Mouth. Some of those musicians have been around longer than Camper, while others benefited from the college-radio-to-gold-records trail that CVB and Cracker blazed in the ’80s and ’90s. It’s very likely, however, that Camper is the only band on the schedule that has been reunited longer than they were originally together. After recording their first album in Santa Cruz in 1985, the band imploded on a European tour in 1990. But after reforming in the early 2000s, they’ve been back together now for over a decade. Part of the reason, Lowery says, is that they all agreed to do the band on a more part-time basis, or at least do fewer tours, which puts less pressure on them as a group. But maybe it’s even simpler than that.
“Jonathan says it’s just because we’re not in our twenties,” says Lowery. “And it’s kind of true.”
Camper Van Beethoven and Cracker play BottleRock Napa, which runs May 30-June 1 at the Napa Calley Expo, 575 Third St., Napa. Tickets are $149 for single-day passes, $279 for a three-day pass, at bottlerocknapavalley.com. 877-435-9849.
—Steve Palopoli

Chris Giancaterino
Previous articlePleasures of the Flesh
Next articleNew Headline