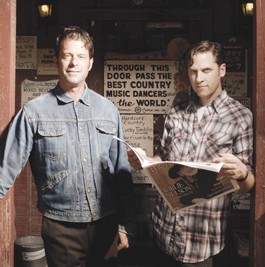 Calexico is a slightly run-down California border town in the middle of the Sonoran desert, rife with the tension and cultural amalgam that occurs when two worlds collide. Borrowing from this geography, the Tucson band Calexico situate themselves smack-dab in the center of a similar sort of musical territory, one populated with motifs and rhythms from carefully curated influences, wherein difference becomes possibility.

“Any kind of border region is fascinating,” explains singer and guitarist Joey Burns, on the phone from his home in Tucson. “When I travel, I’m always intrigued by those [border] regions as well, whether it’s in Europe or South America. I love seeing how people adopt several different languages or cultures or traditions. That’s what gives life to a lot of interesting art and expression.”

While Calexico are probably best known for assimilating influences from the American Southwest—mariachi trumpets, fast jarana-style strumming and Spanish-inflected lyrics—into a signature indie-rock sound, Burns says that he and drummer John Convertino have also dug into European and Middle-Eastern influences plus rock, folk and jazz sensibilities throughout the 15-plus years since Calexico split off from their former band, Giant Sand. He likens their sound to a “mixed-up melting pot.”

“If there are a lot of people doing any kind of particular musical styling, we’ll generally drop it because there’s no real use in doing it,” says Burns. “We’re more interested in finding new sounds and new expressions.”

While Calexico haven’t released a full-length album since 2008’s Carried to Dust, a concept piece that narrates the story of a Los Angeles writer during the writer’s strike, Burns notes that the band has kept busy composing soundtracks to films. The step is n atural, since their music embodies an epic, nearly mystical tone, perfect for long, sweeping movie shots. They recently completed the soundtrack to Circo, a documentary about a family of circus performers traveling through rural Mexico, and The Guard, a dark comedy starring Don Cheadle.

In 2008, Calexico even broke past the earth’s borders after one of their songs was chosen as the outer space soundtrack for the space shuttle Discovery. Gabrielle Giffords, the Arizona congresswoman who survived an assassination attempt last January, is a big fan of the band, and selected the song “Crystal Frontier” as the wake-up call for the shuttle crew, for which her husband Mark Kelly was commander.

The band was again played in space when Kelly commanded the historic final flight of the space shuttle Endeavor this past May, as Giffords lay in a Houston hospital recovering from a gunshot wound to the head. Burns himself chose the song “Slowness,” a duet that references Tucson, and a moment of crisis in the lives of two lovers.

Burns says his friendship with Giffords and Kelly made the experience more than just an achievement for the band. The song “is about reaching out over that space or out into that space,” says Burns, “thinking of a loved one in the past, or just thinking of them in the now, so it was very sentimental and it was really honest.”

Beyond time and space, pushing past aesthetic borders, too, is a hallmark of Calexico. Burns says that in the end, Calexico’s sound comes down to a willingness to accept diverse influences without fear, a notion influenced by living so near the border.

“It’s openness and perspective that I really appreciate when I talk with others who feel more of an openness to immigration policy or just embracing things that they don’t know,” says Burns. “And that’s a positive thing.”