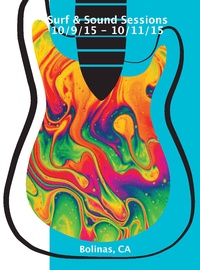 With the world’s largest ocean at our feet, California and the North Bay have long been champions of coastal cleanups and environmental awareness. It’s a topic that’s never far from our headlines. Just this week, Governor Jerry Brown signed a law that bans micro-beads in California by 2020, as those beads are found to pollute the waters and harm the wildlife.
The good news is that everyone can help keep our beaches and coastal areas clean. This weekend,  nonprofit Project AMPLIFI is hosting a special Surf & Sound Sessions in Bolinas, pairing two nights of live music with environmental cleanup efforts. Artists and their fans will have the chance to surf together, help clean beaches together and share their appreciation of the nature around us.
Tonight, Smiley’s Schooner Saloon in Bolinas welcomes Latin reggae band Bachaco and the surf funk of San Francisco’s the HA (Human Assembly). Tomorrow night, Oakland indie pop band Trails and Ways performs off their recent gem of a record, Pathology; while This Old Earthquake bust out the acoustics for their driving americana.
Cleanup efforts will be taking place on Stinson Beach on Saturday and Bolinas Beach on Sunday, both in the afternoon so you have a chance to sleep off the effects of the night before. For more information on how you can get involved, click here.

Charlie Swanson
Charlie Swanson is a North Bay native and an arts and music writer and editor who has covered the local scene since 2014.
Previous articleOct. 8: International Swagger in Sebastopol
Next articleMoonalice Headlines Upcoming Rocktoberfest