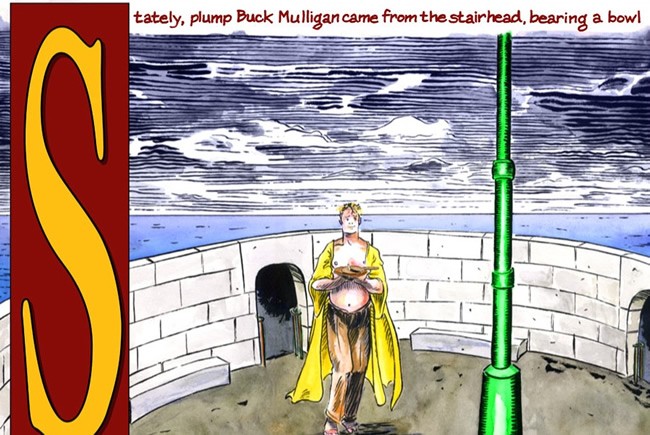 To true Lit Nerd Geeks, Wednesday, June 16, is no ordinary day. Rather, it’s Bloomsday, named for that warm 1904 Thursday during which Leopold Bloom wandered the city of  Dublin, Ireland, and—not incidentally—explicated the entire history of Western literature while wooing wife-to-be Molly Barnacle and just generally standing in for the ancient hero Odysseus.

If you’ve read James Joyce‘s 1922 masterpiece Ulysses, you yourself embarked on a mythic journey. Most find it impossible to understand the novel without some help; I couldn’t have finished a page without a nearby professor. But having emerged triumphant at the book’s close, one feels a lifetime affinity to this modernist classic. Not only is this 18-part story Leopold’s/Odysseus’ achievement, it is one’s own.

And so, when our weekly publication date this year fell on Bloomsday, we fell upon the opportunity. From the Letters to the folios (where the dates are on the bottom of each page) to a pull quote, a caption, several calendar and dining capsules, sky box text, the movie page and more than one classified ad, our June 16, 2010 issue is studded with text taken straight from Ulysses. Eighteen pieces of text, in fact. Naturally, we need to host a contest.To wit: Those three readers who can name the most (we’d be in Lit Nerd Geek Heaven if someone gets all 18 but aren’t counting on it) citations sneaked into this issue will win a Toad in the Hole Pub gift card. (Yes, we know that the Toad is an English pub and that Dubliners were steeped in The Troubles with England for centuries, but it’s what we’ve got.)  Contact us either through Facebook or via email: [email protected] by Wednesday, June 30, to win.

While compiling our small fun for this week’s issue, we stumbled upon a more sustained bit of fun, Ulysses Seen, a complete graphic novel depiction of Joyce’s masterpiece that is amazingly meta, allowing for critical citations and reader discussion forums as well as links to such YouTube pleasures as the sound of an actual Latin mass (which words begin the first chapter), so that readers get an even deeper understanding of the tome. If only this had been around when we were in grad school! This week, Apple approved Ulysses Seen as a new app for the iPad, which might make acing this contest that much easier.

Thanks to copyeditor Gary Brandt, a Joyce fanatic if ever there was one (he even has the last word of Finnegan’s Wake tattooed on his ankle) who chose the excerpts and directed the placement. His love for Ulysses more than forgives his strange yen for prog rock.