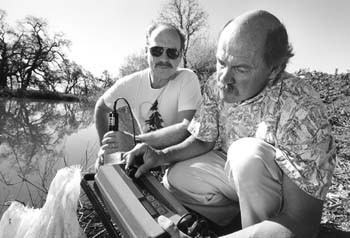 WITH the ease of PacMan, bacteria naturally found in soil can gobble up unwanted organic material: manure leaching into streams, oil spilling in soil, and even human waste clogging up the filters in sewage treatment plants. “We call it the Chinese infantry principle,” says Occidental ecologist Dan Wickham, one of the owners of International Organic Solutions, which cleaned up 5 million gallons of black water in the Laguna de Santa Rosa last fall, when a pipe from Barlow’s apple processing plant developed a hidden leak.

“You start a culture in a porous ‘tea bag’ and the hungry bacteria start eating up the gunk. They all die off in the process, but these bacteria are so cheap, you just send in another wave of Chinese infantry. It’s very, very effective.”

Alyssa Barlow, IOS vice president, agrees. “What better way than to do it organically?”

That’s exactly Wickham’s point. This bioremediation process–which has been widely used to break up oil spills from the Alaska coast to the Gulf of Mexico–mimics the action of nature, and leaves no residue of human intervention. “Prior to the arrival of the [settlers], the Laguna’s banks were all forested. There was a huge amount of leaf litter all around it. You would have had a normal organic load going into the Laguna, and these bacteria from the leaf litter washing into the Laguna would have cleansed it.

“It was a natural balance.”

But now, that balance has been upset. “You have an increase in the load–from cattle, human activities, storm drains, and treated wastewater–and instead of forests, you have pavement, rooftops, dairies, baseball fields using nitrate fertilizers,” Barlow observes.

The IOS 500 formula uses enormous numbers of bacteria of the same kind as those that have been devouring all the leaf litter falling on the earth for hundreds of millions of years. “This type of bacteria has a huge appetite for organic material. It can live with or without oxygen, so it can survive on top of the leaf pile as well as underneath, and it has a wide range of tolerance to environmental conditions, particularly temperature,” she adds.

Freeze-dried enzymes like protease and amylase are added to the mix to accelerate the process–removing the odors–as well as sufficient humic material to spur explosive bacterial growth when the bag is immersed in water. Aeration assures that enough oxygen is available to keep the process bubbling.

In the case of the Barlow leak into the Laguna, the water cleared up in just a week. “Bioremediation works pretty well,” confirms Mike Rugg, water quality biologist for the state Department of Fish and Game, who calls himself a “strong advocate” for this method. “It has great applicability to a whole host of situations where we’re trying to restore the environment.”

Wickham says the inexpensiveness of the treatment makes it much easier for Fish and Game to enforce water-quality rules. “One problem for regulators,” he says, “is that they may cite somebody who will be forced out of business as a result. He’ll sell the property and turn it into a housing project, which will deteriorate the environment even more.”

In such cases, Fish and Game may be tempted to overlook infractions rather than lose farmland.

A former winemaker (he was the owner of Sea Ridge Winery in Occidental), Wickham notes that biotechnology industries like cheesemaking and baking use commercially controlled, dependable forms of bacteria in their processing. “But wastewater treatment, probably the biggest microbiological industry on earth, uses the most ineffective type of bacteria–those from fecal material. They are the worst possible kind of bacteria because they come from human stomachs. We have an immune system.

“The minute bacteria strong enough to defeat the immune system got in there, you’d be dead!”

The bacteria used in wastewater treatment survive potent stomach acids because they are coated with mucus. “They produce a huge amount of slime, which causes all kinds of problems in sewage treatment.”

And the bacteria, as Wickham’s partner Bob Rawson points out, “are no more efficient in the treatment plant than they were in humans.”

Rawson once ran all the treatment plants in the west county. “Our current treatments are capital, technology, and energy-wasteful methods of purifying water, producing large quantities of sludge and greenhouse gases,” he says. “The world needs simpler technologies.”

ANOTHER biotechnology employed by IOS is being tested by Santa Rosa’s city water department at Sonoma State University. It’s called transpiration, and involves drawing the treated water under the ground and directly to the roots of giant water consumers: redwood trees.

“Redwood trees are the fastest-growing trees on Earth, and they consume huge quantities of water,” says Rawson. “Using the bacteria is better than wasting electricity to run advanced treatment systems, but growing redwood trees is better than the [bioremediation] formula.”

Restoring forests in the area surrounding the Laguna would complete the cycle native to the region, simultaneously consuming wastewater and generating bacteria to gobble up pollutants.

What Rawson envisions is a combination of the two techniques. “If the town of Occidental were to set up a community septic system using IOS 500 as the primary treatment, that would reduce the amount of solids to be pumped and hauled to the landfill, and break down the grease to sugars and alcohols that trees could use.

“The effluent could then be disposed of [by delivering it] to the trees in a transpiration leach field.”

Camp Meeker could solve its sewage problem by joining forces with Occidental, he adds. Pat Aho, whose family owns substantial acreage at the top of Camp Meeker, is considering making some of her property available for that purpose, he says.

Back at Barlow’s, Rawson is working with Lescure Engineers to create a new treatment system combining several technologies. The IOS 500 will be added to a 50,000-gallon tank to ferment the waste. The solid material floating to the top will be skimmed off and sent to Dei’s Dairy to be used for compost.

The liquid that remains will be clarified to 80 parts per million and sent to the Santa Rosa sewer.

In the summer, Barlow will use that water for irrigation. “High-strength streams–low volumes of fairly concentrated sugars–will be used for transpiration to grow trees and landscaping year-round.”