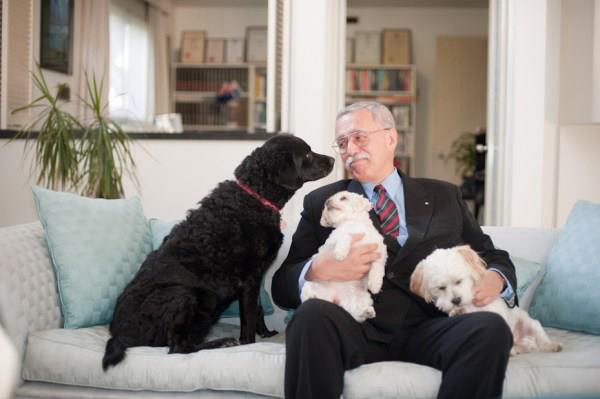 Moral thunder from down under

Philanthropist Philip Wollen, vegetarian and builder of orphanages, is crying out that the global meat industry is not only unsustainable but unethical. “The earth can produce enough food for everyone’s need,” says Wollen, “but not enough for everyone’s greed.”

Is eating meat a form of greed? There are plenty of ecological and health-related arguments against the consumption of meat. But the moral argument is coming loudly from Wollen, an Australian who, in a conservative suit that recalls his former career as a Citibank executive, steps up to any podium and advocates interspecies equality.

Before a TEDxMelbourne audience this year, Wollen’s provocative, anti-meat speech quoted Shakespeare’s King Lear, where the blind Gloucester advises the king to see the world “feelingly.” Wollen certainly does. And he wants people to be made uncomfortable by his talk-related photos: a starving infant in a country where croplands are dedicated to raising grain for Western livestock, juxtaposed with a steak that’s larger than the baby; the suspended carcass of a large dog, freshly skinned; a bleeding seal pup; and a harbor red with whale blood. “I discovered that when we suffer, we suffer as equals,” says Wollen. “And in their capacity to suffer, a dog is a pig is a bear is a boy.”

Wollen’s difficult-to-digest message includes environmental statistics on the impact on water resources, which are diminishing as the population expands—in numbers as well as pounds per Western individual. “Vegetarian cows,” Wollen claims, are “ocean predators,” a reference to the pollution caused by nitrate runoff and sedimentation from deforestation to create croplands, among other water-polluting industry practices.

At the same time the planet is losing drinking water, aquifer depletion has been worsened by cattle ranching. “It takes 50 thousand liters of water,” says Wollen, “to produce one kilo of beef.”

Wollen’s ultimate plea, however, is not environmental but humanitarian; he wants to end suffering caused by starvation. Reducing our Western meat consumption by 10 percent will reduce hunger for millions, he claims, and taking meat off the menu altogether will “end starvation forever.” Wollen asks the audience whether it’s worth it to us that people are starving so that we can eat a steak.

Vegetarians, by Wollen’s calculations, number more than 600 million people. “That’s more than the United States, England, France, Spain, Germany, Canada, Australia and New Zealand combined,” says Wollen. “If they were one nation, they would be bigger than the 27 nations that make up the European Union.” Yet Wollen claims vegetarians remain unheard.

What isn’t going unheard, clearly, is Wollen and his going-viral speech.