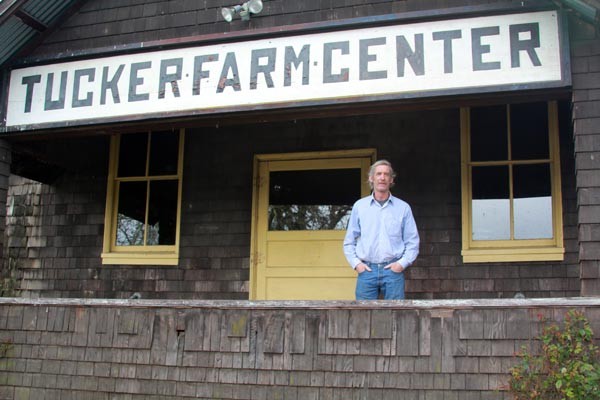 Motoring down Highway 29 just north of Larkmead Lane in Calistoga, it’s hard to miss the wood-shingled Tucker Farm Center. Depending on the time of day, or night, it can morph from haunting and decrepit to majestic in an instant.

Still, the Farm Center wears its wounds well. When erected in 1921, it stood as one of the largest farm centers in the state. The original aim of the place was to build a hall for the community to meet and hold events. Nearly 90 years later, that mission has barely changed. The building still stands as a local meeting spot for just about any cause, from farm bureau meetings and dance classes (most recently, burlesque) to weddings and theater productions.

In the ’70s and ’80s, the center became a go-to spot for music gigs and “keggers,” hosting such bands as Mitch Woods, Norton Buffalo and the Sorentinos. While the locals loved the scene, the legendary building paid the price of the partying. “It was running the building into the ground,” says Ron Vuylsteke, president of the Tucker Farm Center board of directors. Coincidentally, Napa County started cracking down on amplified noise permits, and the brewski-induced rollicking ground to a halt.

Unwilling to let the center die, the local community banded together in the early ’90s to form a nonprofit that became the lifeline for the storied hall. Over the next several years, the building received a facelift, which included the installation of a water and septic system, bathroom, new roofing and refurbished floors.

The late Barbara Wider, a legend in the valley, worked tirelessly to help restore and manage the hall during the last decade of her life, and graced the Tucker stage herself on many occasions. Currently, the center remains a for-rent gathering place while serving as home to the Theater Arts Revival troupe, whose aim is to bring theater back upvalley.

“It is a challenge to keep the place going,” says board member Glenn Pope, pictured above. But as long as there’s a willing community in Napa County that needs a solid, rustic event hall, the Tucker Farm Center should hopefully stand tall for another 89 years.Tucker Farm Center, 1201 Tucker Road, Calistoga. 707.942.0977.—C.J.

Best Place to Find the Spirit of Pithecanthropus Erectus

A laid-back, West Coast brew of drunken nostalgia, the No Name Bar in Sausalito is just a few miles north of the Golden Gate and has been home to many a thirsty bohemian for more than 50 years. Opened in 1959, the saloon is scattered with time-worn furniture and old pictures, looking on as regulars who’ve made the place a prized neighborhood hangout swap bar stories over dry scotches and late-night rounds of chess. Along with the Marin locals who frequent the pub, the bar has gained renown for its cast of iconic appearances over the years—Bob Dylan, Charles Mingus, Clint Eastwood, Alan Watts, Lenny Bruce and Jack Kerouac, to name just a few. But while the big names have brought the nameless haunt a celebrity of its own, the soul of the place remains grounded in the musicians who serve patrons all-night sets of cool jazz, original blues and old-time rock ‘n’ roll. 757 Bridgeway, Sausalito. 415.332.1392.—M.S.

Best Loveseats in the Back Row

I once sat next to a man inside St. Helena’s Cameo Cinema who said it was the first time he’d been back to the theater since he worked there—which was in 1940. He was delighted the sound system was upgraded and that the stage remained pretty much the same. The chairs were certainly upgraded, too, he noted, and there were these weird glasses that make some parts of certain movies jump out as if one could just touch them. Crazy! Built in 1915 as the Golden Gate Theatre, the one-screen movie house on Main Street has seen its share of changes, and every few years there’s a scare it might close down for good. But locals, including filmmaker and longtime supporter Francis Ford Coppola, are grateful it’s still there. 1340 Main St., St. Helena. 707.963.9779.—N.G.

A relic from the days when radio waves buzzing with Morse code began to shrink the world, the Marconi Conference Center, a historic listening outpost overlooking Tomales Bay, still houses some antique audio gear that gets fired up on special occasions. Built in 1913, the 62-acre property was an active receiving site during both world wars. Later, in the late 1960s, it became home to Synanon, a drug rehab center that devolved into a semi-notorious cult. Acquired by the state in 1990, it’s now a state historic park, which offers quiet, modern accommodations for up to 102 visitors, spread around a spacious dining hall with several well-equipped meeting rooms. Outside, bucolic vistas of the bay and extensive trails curling along the hillside transcend time, with a lingering sense that there could be more than the soft sounds of native fauna whispering in the onshore breezes. 18500 Hwy. 1, Marshall. 415.663.9020.—B.R.

In the years since Hans Grauman started the Rainbow Cattle Company in 1979, its redwood facade has become a staple of the downtown Guerneville skyline.

Its URL, QueerSteer.com, is relatively new. But according to manager and part owner Bob Frederick, who started tending bar in 1984, the place itself, which he likens to the Cheers bar, hasn’t changed much. “That’s why we’re still open and why we’re still the Rainbow,” he says.

With longstanding links to Guerneville gay culture—Sisters of Perpetual Indulgence, Lazy Bear Weekend—the bar has been fusing ties with small-town community groups as well, according to Frederick. “Give Back Tuesdays” invites leaders from nonprofits, libraries and even the parents of local cheerleading teams to have a drink under the neon rainbow and receive a portion of the funds. “Becoming more a part of the community is my whole goal, and bridging the two communities, gay and straight,” says Frederick.

The longtime bartender left San Francisco for Guerneville 30 years ago, partly because, as he puts it, he didn’t like the strange segregation that often develops between gay men and lesbian women. Though the rustic bar was once mostly a man’s bar, he says, it’s changed to reflect the river community, with more women and families. “It’s become everybody’s bar,” he says. 16220 Main St., Guerneville. 707.869.0206.—R.D.

Best Place to Kick Up the Boot Heels

Secluded in the boondocks of West Marin, a short way from George Lucas’ Skywalker Ranch, rests the sleepy village of Nicasio. Established just two years after the Civil War ended, Nicasio—the name means “the hidden one”—boasts locals who still mosey through the rustic, western outfit today with a slow-paced, 19th-century sensibility. Save for the parked cars and two-hour-limit signs, visitors sauntering down the area’s old, dusty roads will be hard-pressed to find the slightest streak of modernity. While the night sky alone, swirled in the Milky Way’s glow away from city lights, is reason enough to make a trip, what lures Marin County crowds most to this remote site is Rancho Nicasio, the town’s sole restaurant, tavern and community hub. Opened in 1941 after the Nicasio Hotel crumbled in a fire, the Rancho is dotted with paintings of old saloon scenes, hunting trophies, a snarling bear and a petrified-looking jackalope. Behind the barroom, tables fill the Rancho Room, where for decades every Friday through Sunday bluegrass, country and rock groups have serenaded guests dining on lamb medallions or dancing under the lamplight of a rusted wagon-wheel-turned-candelabrum. Along with its weekend jam bands, the Rancho throws together big barbecues and events every summer, drawing hundreds outside its doors to let loose and party in this otherwise tranquil home on the range. 1 Old Rancheria Road, Nicasio. 707.662.2219.—M.S.

Amid the celebrated recent opening of the Sweetwater Music Hall in Mill Valley, it’s important to not overlook the adjacent little theater with a long, rich history. The 142 Throckmorton Theatre opened all the way back in 1915 as the Hub, hosting silent films with live piano accompaniment. In 2003, Lucy Mercer bought and revitalized the venue, expanding its programming. An average week can host international poets, famous icons in conversation, local theater productions, Mill Valley Film Festival picks or, of course, local musical talents like Bob Weir, Dan Hicks or Sammy Hagar. The highlight is still Tuesday night’s Mark Pitta and Friends, an affordable long-running comedy show that features some of the best comedians in the world trying out new material for an unwitting crowd (the performers are not announced beforehand). When you see locals Robin Williams and Dana Carvey or visitors like Richard Lewis hanging out in the lobby after the show, you almost forget that they’re famous. Almost. 142 Throckmorton Blvd., Mill Valley. 415.383.9600.—D.S.

In a story as dramatic as Casablanca, Ben Hur or any other film that’s graced its single screen over the last 80 years, the Lark Theater, once teetering on extinction, was saved from disrepair and demolition by a cadre of dedicated Marin citizens. In 2004, the group mounted a campaign called “Save the Lark”; within a year, the theater was restored to its 1936 art deco splendor. Headed by executive director Bernice Baeza (and assisted by Zuleyka Mora, pictured), the cinema has played host to the annual Youth Film Festival, the Family Film Series, Live at the Met performances and live music, in addition to showing first-run films. With a state-of-the art sound and visual system, the theater is thoroughly modern in a retro way. Dig into a bag of popcorn and wash it down with wine while sinking into plush, red velvet seats for a supreme movie experience that could never be replicated at home. 549 Magnolia Ave., Larkspur. 415.924.5111.—L.C.

Best Skeletons on Either Side of the Stage

Best Swingin’ in the Vines

In 1969, a new generation discovered LSD, tripping to bands like the Chocolate Watchband, the Tangerine Zoo and the Strawberry Alarm Clock. In Napa, Margrit Mondavi rather preferred more nuanced tones, and thus founded the Mondavi Jazz Festival. Known over the years as the Mondavi Summer Music Series or the Summer Jazz Series, the fest has seen the likes of Oscar Peterson, Ella Fitzgerald, Tony Bennett and Harry Belafonte; this year, the vision expands to include O.A.R., Five for Fighting and Plain White T’s. Along with her contributions to the restoration of the Napa Valley Opera House (see adjacent), Mondavi and her summer series have more than earned your vote as Best Music Festival in Napa County. 7801 St. Helena Hwy., Oakville. 888.766.6328.—G.M.

It all began with a performance of Gilbert & Sullivan’s H.M.S. Pinafore back in 1880. 130 years later, the Napa Valley Opera House continues to host stars of the entertainment world, including Elvis Costello, Pink Martini and, this weekend, Branford Marsalis. That’s why you voted this downtown historic landmark and vibrant, intimate theater as Best Performing Arts Center in Napa County. After enduring an 89-year-long hiatus, a newly renovated and retrofitted building debuted to grand applause in 2002. In 2012, the opera house continues on as a beloved space for local and national displays of imagination and artistic excellence. 1030 Main St., Napa. 707.226.7372.—L.C.

Previous ArticleJudi Bari, the FBI, and the Press Democrat: Reporter Mike Geniella on an Unsolved Case

Next ArticleAcross the Bridge: March 21 – 28