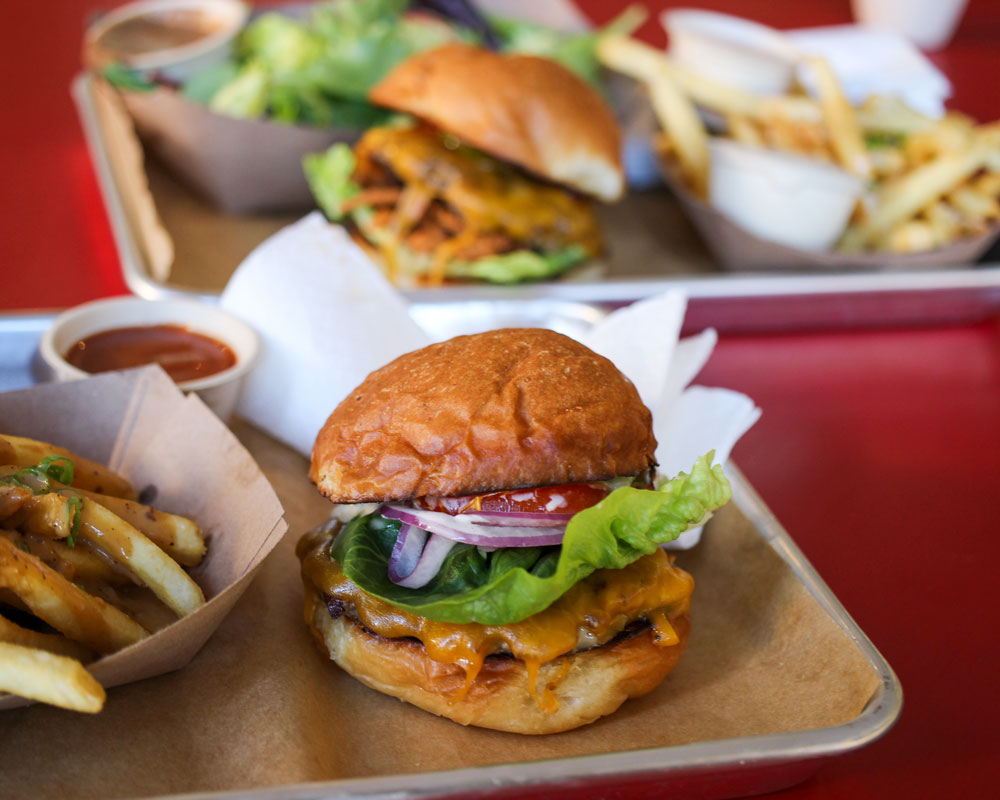 Rather than let the Covid-19 pandemic slow them down in 2020, the three founders of Sebastopol’s popular fine dining restaurant Gravenstein Grill pivoted dramatically.

The first featured artisanal pizzas, and the latter put quality burgers and hot dogs front and center. Sonoma Burger proved so popular that it became a permanent brick-and-mortar dine-in and carry-out eatery in September 2021, in the space formerly occupied by Giovanni’s Deli in Sebastopol. The 2,000-square-foot eatery has counter seating for 10 people, table seating for 20 and outdoor seating for 16.

The founders haven’t looked back ever since, and now are planning additional family-friendly Sonoma Burger outlets throughout the county.

“We knew that Gravenstein Grill’s brand of fine dining cuisine didn’t translate very well to everyday takeout,” Brandon said, reflecting on the inception of the Sonoma Burger. “But we didn’t want to lay off all our staff, and we wanted to keep cooking.”

They chose a business model that would allow take-out and delivery of food that Brandon characterized as “something we love to eat every day” — comfort food that was minimally processed.

They wanted to offer approachable, everyday food that traveled well, in contrast to the aesthetic of the precisely plated and upscale offerings at Gravenstein Grill. They created a simple menu of smash burgers and griddle dogs, sourced, cooked and delivered with the same level of attention to detail and culinary technique that are the hallmarks of the five-year-old Gravenstein Grill, a special occasion and date-night favorite.

Of course, the real selling point of this venture is how the food tastes, which is where chef Simontacchi’s 25-plus years’ of experience came into play. Sonoma Burger cooks weighted burgers and dogs (“smashed”) on griddles rather than grills. This produces a flavorful crust on the meat for extra and enhanced umami flavor, Brandon explained. Sonoma Burgers sandwiches are smaller than the restaurant “pub style” burgers they serve at Gravenstein Grill — “something you could have for lunch,” Brandon said, pointing out an entry-level Classic Smash Burger is in the $6 range.

The other trappings include the Willie Bird turkey burger, a crispy chicken sandwich, and a house-smoked tempeh burger with vegan barbecue sauce. The sides are equally impressive, with French fries, fried pickles, crispy onion rings as well as a wealth of other pickled goods and house-made sauces, which customers can now buy as standalones, not to mention amazing add-ons like pimento cheese and pickle relish. Check out the rotating selection of seasonally influenced shakes and the locally selected wines from Hook & Ladder Vineyards & Winery, plus brews from the likes of HenHouse Brewing Company and others.

The tagline for Sonoma Burgers is “A Mindful Burger.” Brandon explained that the restaurant puts mindfulness into every aspect of the business, right down to the compostable carry-out containers. The restaurateurs give back to the community, too, sponsoring sports leagues; contributing to charities; hiring locals (including high schoolers); and donating to Food for Thought, the nonprofit food bank in Forestville. In fact, because of a direct partnership in which they give the profits of all Willie Bird Turkey Burgers sold at Sonoma Burger directly to Food for Thought, they were able to expand programs like Full Belly, which provides food and nutrition support to pregnant women (and their families) at risk of malnutrition.

Brandon, who lives in Sebastopol, and his fellow founders, who are Petaluma residents, are proud of the bounty of Sonoma County and their connections to area purveyors. In fact, that’s why they decided to put “Sonoma” in the name of their burger venture. “We are really proud to be here in Sonoma County,” he said. “The products all come from Sonoma County, and we treat them with care. We like to showcase the amazing produce, meat and dairy we have available to us by creating a product that everyone from top to bottom is proud of. We’d like Sonoma County to be as proud of having us here as we are to be a part of the amazing community.”

While Sonoma Burger was voted best carry out in Sonoma County, it’s also got a loyal local dine-in crowd. Some diners are popping in on the way home from little league games while others have claimed a corner for a little hanging out.

“We feel like we’re friends with everyone in the neighborhood,” Brandon said.

Look for the expansion of Sonoma Burger to a handful of other Sonoma County outposts, such as Windsor, Petaluma, Rohnert Park, Cotati, Kenwood or Sonoma beginning later this year.

Previous ArticleBest of the North Bay 2022: Arts and Culture

Next ArticleLetters to the Editor: The Age of Shamelessness