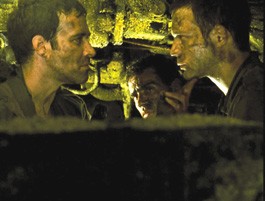 Belly of the Beast

Israeli director Samuel Maoz was wounded in the 1982 Israeli excursion into Lebanon (a piece of history seen in Waltz with Bashir). It’s obvious that much of what one sees in his Lebanon comes from personal experience. The problem is that the part that comes from a keen knowledge of cinema techniques—of grabbers and close-ups—is obvious, too, and the mixture doesn’t quite mix.

One takes away from Maoz’s film the sense that tank warfare is an especially filthy way to fight and die, and that’s the mark of a serious statement of a wartime experience. You make the discovery, “This is absolutely not the way I’d want to fight a war,” the same way you did when reading Randall Jarrell’s poem about the ball-turret gunner or checking the finale of Pat Barker’s Ghost Road, describing WWI foot soldiers, in their extremity of exhaustion, deliriously imagining the sun reversing its course. There are times when the Quakers don’t seem all that crazy.

The movie is mostly carried out in tight close-up as the operation begins, hours before daylight. The crew of the tank, code-named “Rhino,” get lost, away from the rest of their command. After they’re crippled from a direct hit, they’re trapped in the neighborhood of a pair of vengeful and unreliable Phalangist Lebanese allies. The tank’s officer, Assi (Itay Tiran) is showing signs of fracture, like the rest of Rhino’s green and nerve-wracked crew.

We don’t leave the tank’s interior, though people (a corpse, an officer, a Syrian prisoner) drop in through the hatch. After the wallop of a shell—shown in John Woo slow motion—the cast is sprayed with almost pressurized filth, and the now blackened faces of the crew are even more indistinguishable than they were before.

Getting a nude scene into this kind of film wasn’t easy, but Maoz did it. After the tank wastes a terrorist, a civilian’s dress catches on fire, and she tears it off herself. The periscope tracks her as she looks for something to cover herself with. I’d accept that gawking at a naked woman is exactly what a soldier would do. I’m less comfortable with her scorn and rage as she stares down into the tank’s lens. The cut from her eyes to a soldier’s eyes makes their experiences equivalent. That’s the old war-movie lie: having to watch people suffer is as bad as suffering.

There are shockers here. Something terrible that happens to a civilian is like a real-life version of the finale of 1932’s Freaks, and the eye of an eviscerated donkey gets a tight close-up (something a cameraman might focus on, but would a soldier?). There’s also a plausible monologue about a boy’s orgasm shortly after the death of his father. Maoz’s uncomfortable way with dialogue, combined with the film’s tunnel-vision, ensures that the lines have the staged sound of a radio play.

It may be good enough that Lebanon is the work of a humane man who doubts the necessity of war. But if there’d been something else manifested here, the imperativeness of De Palma, the punch of the William Friedkin who made Sorcerer or even more touches of the “black comedy” Maoz says in interviews that he wants to make next, Lebanon would have been so powerful that it would have been unwatchable.