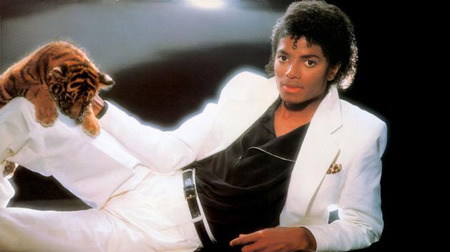 I’m 36 years old, and just a few months ago I finally listened to the best-selling album of all time. I was six when it came out, but I associate Thriller with second grade, because that’s when Michael Jackson mania trickled down to the likes of little girls. I remember Bryn Taylor, the most stylish girl in my class, wearing a sequined glove to school one day. I remember my friend Julie Dillon holding her photo button up to my face so Michael Jackson, in his buttercream-yellow sweater vest, could give me a kiss, even though I thought it was weird. I remember going to Pastime Pizza Parlor with my parents and asking them for dimes to put in the jukebox so I could play “Billie Jean” and “Thriller” (alas, we left before my songs played, a fate I still suffer with jukeboxes to this day). It was the apex of Michael Jackson as a pop culture phenomenon, and to be a kid alive in America at that time negated the need to listen to Thriller to know what it was all about. If you watched T.V. or listened to the radio (both of which I did in spades), waves of Michael Jackson crashed upon you.

Fast-forward three decades. We rent a 100-year-old beach cottage for the weekend, and in keeping with the old-timey spirit of our lodgings, we leave our electronic devices at home. The cottage is equipped with a record player and an assortment of albums matched only by a Goodwill bin. We put our daughter to bed and I get sort of drunk and fish Thriller out of the pile and cobble together half of a “Peanuts” jigsaw puzzle while the record plays. And it is thrilling; I want to throw a party or go to a dancehall, but instead I finish off the bottle of red wine and complete the puzzle for good measure.
I open up the gatefold and look at the lyrics, and finally I realize I’d never misheard the coda of “Wanna Be Startin’ Something,” and it is a bunch of gibberish after all (“Mama-say mama-sah ma-ma-coo-sah”).
Then I notice a cartoon.

It strikes me as sweet that Michael Jackson would include amateurish fan art in his album—the cartoon has all the finesse of a notebook doodle by the guy who sits in the back row of your Civics class—until I see Michael Jackson himself was the artist.
“The Girl Is Mine” is a lovely song if you don’t pay attention to the lyrics. It brings to mind rides in department store elevators and waits in dentist’s offices, so softly and smoothly does it rock. However, it’s a bit odd to hear two wussy men (Sir Paul and Jacko, both still in very cuddly iterations) play-sparring over the affections of a lady against Quincy Jones’ lush and soothing sonic backdrop. “The doggone girl is mine” is perhaps the most disturbing and revealing line in a catalog brimming with disturbing and revealing lines; no one who ever had mature, romantic feelings toward a person is capable of writing such a song, or drawing a cartoon of himself playing tug-of-war with Paul McCartney, using a woman who looks like she’s constipated in place of a rope.
That silly cartoon might as well be a key to Michael Jackson’s psyche. Because that cartoon is fan art; Michael Jackson, pop’s most infamous narcissist, was his own biggest fan. He had to be in order to pull off that whole superstar business, he of the Moonwalk and the serpentine coils of hair and the feminine but militaristic uniforms studded with superfluous buckles. I imagine the shreds of Smeagle still alive in Gollum; it’s conceivable that Michael Jackson was a Tolkkien fan. Why not? The human little boy rattling around in the hollows of the King of Pop was thrilled that his life’s work, a benevolent but also threatening demigod, had captured the attentions of millions and sang with former Beatles.
At some point between second grade and Neverland, I stopped caring about Michael Jackson. On the day his death was reported, I was listening to “Morning Edition” in bed; it was still early, and I was barely awake. “Oh, Michael Jackson died,” I thought, as if it were just a formality, as if a symbolic plug had finally been pulled. To most of us, he hadn’t been living for a very long time.
After the beach trip, I find a copy of Margo Jefferson’s On Michael Jackson, a moving and eloquent collection of essays that came out in 2006, somewhat fresh on the heels of the whole child molestation trial debacle. In her book, a slender rhapsody on gender, race, celebrity, and family, Jefferson examines the factors that bore the circus of Jackson’s life, and she more or less argues that his meteoric career trajectory, launched at such a tender age, denied him the pleasure of ever being a full a person. “The world is full of people who cannot get over childhood damage or adult trauma. At this point Michael Jackson’s damage is equal to what his talent was, and that means it is extraordinary indeed,” she writes.
I loved listening to Thriller and doing a “Peanuts” puzzle. I’d do it every night if I could. But we packed up our sunscreen and beach toys and headed for home, leaving one of the world’s 29 million copies of Thriller behind in its rightful place.

Previous ArticleSmells Like Teen Spirit: Battle of the Teen Bands