.Before You Watch ‘Tiger King’ Tonight, Read This

EXCLUSIVE: An Interview with Marilyn Goode, the 90-Year-Old Mom Behind The Netflix Sensation 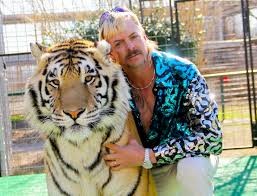 The new Netflix docuseries Tiger King: Murder, Mayhem and Madness has gone viral as Covid-19 accelerates across the country, catching an American public unprepared. And yet Tiger King, for all its kitsch and depravity, is not only entertaining millions of streamers on lockdown, but is eerily relevant—a timely parable for the pandemic.

Joe’s admiration and hatred of notorious rival big-cat keepers fuels the drama and seems, at first, to be a virtual and literal showdown between those who rehabilitate and those who profit off captive big cats. But as the cameras open the gates to these warring tiger kingdoms, what escapes are bleak narratives of abject poverty, addiction, trolls, misogyny, white saviorism, the dispossession of rural Americans and celebrity-culture obsession. The human and animal trafficking on display are driven by desperation and criminal exploitation, and the web of subjects, geography, filmmakers and their inner circles, is a tangled one indeed. Director and producer Eric Goode is no exception.

Goode and co-director Rebecca Chaiklin spent years following Joe Exotic and a stranger-than-reality-TV cast of subjects. Goode’s 90-year-old mother Marilyn, a long-time Sonoma resident and conservationist, was with him in South Florida five years ago when the Tiger King story took an early turn. Marilyn is visible in one of the first scenes, watching her son carry a massive 23-year-old python out of a garage. Goode traveled to South Florida to investigate a reptile dealer, but his story takes a fortuitous turn when a client turns up with a snow leopard caged in the back of his van.

“[Eric] saw that snow leopard in the heat and was appalled,” Marilyn remembers. “He started to realize that these people were trafficking.”

But Goode, like Joe Exotic, has his own collection of really wild pets. Marilyn describes her son as “turtle obsessed.” Goode spent much of his feral childhood exploring his family’s property in Sonoma Valley. Marilyn bought him his first turtle, and gradually watched her son’s budding interest evolve into a lifestyle.

“We have a co-dependent relationship,” Marylin says. “He was a shy, introverted boy and always liked snakes and lizards. I never wanted him to hoard things or keep them. On one hand I’ve instilled in him a sense of environmentalism and, on the other, he has a bizarre desire to be important and to be a collector. He started collecting things that he shouldn’t have collected.”

Joe Exotic, who recently filed a $94 million federal Civil Rights lawsuit from prison, is elated with the show’s success and his ascension to superfame. Though celebrities like Cardi B and Kim Kardashian might find his story endearing, Marilyn Goode finds it disturbing.

“I always felt like ‘poor Joe Exotic, he’s so hungry to be somebody,’” Marylin says.

The show’s success has been credited, in part, to the binge habits of Netflix viewers in the time of self-quarantine. It is sensational and bizarre and yet, somehow, makes total sense given the rapidly unraveling reality TV show in the nation’s capital—one is difficult to distinguish from another.

“My son is so lucky,” Marylin says. “Who would’ve thought this show would come out when everyone is like the tigers, locked in their houses?”

Goode’s own fixation with exotic animals helped him gain access to places and interviewees who might have otherwise turned him away.

“He has a very slithery way of getting into these places,” says Marilyn. “He can really talk to them.”

Nobody in Tiger King, on or behind the camera, is not part of the story. Each handyman, ex-teenage husband, campaign manager, former recruit—even the director’s mother—has their piece to add. Marilyn recalls the day she was with her son on their way to a turtle convention in New Orleans.

“In the middle of it, Eric leaves me in the Bayou,” she says. “He says he has to meet this man—another possessed, strange person. He goes into the deep jungle woods and leaves me and I sit there, in the car, for about three hours. I’m just sitting there, watching huge spiders weaving outside the window.”

And so possession begets obsession.

Tiger King also reminds viewers of the role Americans play in bringing wild animals to markets, both domestically and as visitors abroad, from remote places where novel coronaviruses have opportunities to jump from wild animals to livestock to humans.

“Eric has been to all of these terrible markets where they sell wild animals,” Marylin says.

It is not a love for wildlife that brings keepers like Joe Exotic to put wildlife in danger, but rather a desire to bring the wildlife into their own natural habitat. Marilyn observes that popularized contempt for foreign markets is a matter of cultural relevance.

“It certainly bothers me that people are saving dogs to eat them in Vietnam, but you also have to look at the way we treat cattle in this country,” she says.

Joe Exotic is in prison for a long list of tiger-related crimes, as well as murder-for-hire. The murder target was Big Cat Rescue CEO Carole Baskin, a multi-millionaire with a mysteriously disappeared husband and a cat-savior complex.

Despite her polished rhetoric and her all-cat-print wardrobe, Marilyn believes Baskin is “just as exploitative of the big cats as her rivals. They all have an obsession. These places all start with ‘we’re gonna save these animals’ and then they become something like Safari West. They all eventually become very problematic.”

Baskin has the money to pay her staff well enough to make the work of keeping tigers irresistible, and yet her staff is primarily volunteer. In Tiger King, Baskin seems to spend most of her time and money bolstering her presence on social media and tying up deplorables like Joe Exotic in court until they are broke and imprisoned. Her relevance as a big cat rescuer relies on big cats remaining under threat. She is the good guy. If the cats were free and their habitat intact, Baskin’s crusade would be over.

Tiger King is a powerful reminder that American life was already in crisis. Whether viewers idolize Joe Exotic as the backwoods champion of Trump’s America or as a politically incorrect icon who uses his incarceration to push for prison reform, the country can’t stop watching. Meanwhile, calls to return to business as usual, now or ever again, feel alarming, if not impossible.

Marilyn brings 90 years of wisdom to her visions for the future.

“My mother, who lived to 105, lived during the Spanish Flu pandemic in Alameda,” she says. “It went on and on and on. She remembered, in all the neighborhoods, people were bringing out bodies. But a lot of people survived.

“I don’t think we’ll ever be the same from this. I think we’re going to move towards socialism or something revolutionary. We’re going to have to make a radical change—something that will really turn things upside down. It’s very frightening. Right now I’m putting in a vegetable garden.”

And if the change isn’t radical, it might be exotic.

Next ArticleGovernor Won’t Touch the Tap