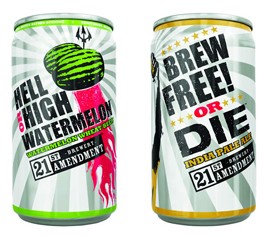 Craft brewers are increasingly thinking outside the bottle

At grocery stores nationwide, the canned-beer department is getting better by the day. Craft breweries around America have begun packing their beers in aluminum, and this summer several breweries joined the game. Locally, the fastest distribution has come from 21st Amendment, based in San Francisco, with the sweeping July release of its IPA and a watermelon wheat beer, each in crumply cans.

Why cans? Aluminum holds multiple virtues over glass. Canned beer will not be damaged by light, and unlike corked or capped bottles, cans are 100 percent airtight, eliminating all risk of oxidation damage. Aluminum cans are also far less energy-intensive to recycle than glass. But perhaps most convincing is the weight factor. A standard 12-ounce empty can weighs approximately six-tenths of an ounce, whereas a standard 12-ounce empty bottle weighs about 10 ounces. That means big savings in shipment costs and tremendously reduced carbon emissions in transport.

Of the roughly 1,300 craft breweries in the nation, some 30 of them are dabbling in aluminum. One of the most outlandish presences in this genre of beer makers may be that of the Bay Area’s newest brewery, Uncommon Brewers, based in Santa Cruz. In May, a release of several thousand cans of Siamese Twin, a Belgian double ale brewed with coriander, Kaffir lime leaves and lemongrass, put the brewery on the map. That beer and the Golden State Ale have been sporadically available at select North Bay locations, including Mondo Restaurant and American Beer Garden and the Sonoma Wine Exchange, both in downtown Sonoma.

Owner Alec Stefansky has been negotiating sales with restaurants and bars throughout the Bay Area while perfecting in the brewhouse several more recipes for some of the strangest beers that bubble, all of them certified organic. The Baltic Porter, scheduled for release in December, is fermented with licorice, pours a thick inky black and tastes of chocolate mousse and coffee. The initial goal for this monster was an ABV of 9.2 percent, but Stefansky has downsized it to 7.8 to make the beer more compatible with the standard bar culture, in which not all proprietors have a ready supply of specialty low-capacity glassware.

Still pending approval by the federal government is the Maple Red Ale, a 7.3 percent creation brewed with candy cap mushrooms, a fungus frequently baked into desserts. Slated for a late-winter release is a barleywine fermented with redwood branches. Stefansky is aiming for a staggering 15 percent ABV.

But Oskar Blues in Lyons, Colo., was the first microbrewery in America to brew and can its own beer six years ago. The brewery’s in-can menu consists of four beers, and distribution includes 22 states, though the Northwest still remains out of the loop.

“We first did this just because we thought it would be hilarious to put our big, strong pale ale into a can,” says Marty Jones, public relations director for Oskar Blues. Soon enough, though, the good sense of canning beer became apparent. The beer was immune to becoming “light-struck,” a skunky condition caused by excessive exposure to light. Oskar Blues beers also became preferred thirst-quenchers for many Rocky Mountain backpackers tired of Coors and leery of heavy bottles. As the company’s distribution radius increased, the savings in shipment costs escalated.

“Forty percent of a bottled beer’s weight is the bottle itself,” Jones says. “So we were cutting our shipping costs and carbon footprint almost in half.”

And though a tall, glass wine bottle on a white tablecloth in the light of candles may be one of the most evocatively romantic images in our culture, even wineries are now putting their product into cans. Francis Ford Coppola’s Sofia Mini, a can of about six ounces filled with a blend of Pinot Blanc, Sauvignon Blanc and Muscat Cannelli is a sparkling Blanc de Blanc suggestive of pear, honeysuckle and passion fruit on the nose and green apple and citrus in the mouth.

First canned in 2004, the wine comes in a pink four-pack case containing pink cans accompanied by a straw, and some critics have decried the product as a vulgarization of the wine experience. Others have proclaimed it to be an innovative, sexy alternative to the old-fashioned standard of a heavy magnum plugged with a potentially dangerous cork.

Iron Wine, based in Argentina, released two wines in 2007, a Malbec-Cabernet blend and a Chenin Blanc. The wines come in cans of two sizes, 8.5 and 12 ounces, and have been touted as bold innovations in a carbon-costly industry ruled by archaic tradition.

Fetzer Vineyards has also taken heed of the carbon impact of heavy glass, though the winery has thus far steered clear of cans. Instead, Fetzer recently lightened the company’s various bottle types by an average of 16 percent each, from over 20 ounces to 17, which will save approximately 2,100 tons of glass annually through the molding of thinner bottles and banishment of the punt, the bottle’s bottom indentation.

The romance of the bottle persists, and mavericks in the world of wine remain few and far between, but at 21st Amendment, cofounders Shaun O’Sullivan and Nico Freccia believe that most craft breweries in the nation will be canning their beer within 10 years, and the pair have big plans for their own cans. They are tentatively considering a future release of a Christmas spiced ale in a 24-ouncer, a direct nod toward the extravagant magnum-style bottles released by many breweries for the holidays. Freccia and O’Sullivan have also considered releasing a massive barleywine in a six-ounce can. Watch for it beside a towering brute of a beer that boasts of redwood on the label. Watch, also, for a long line of others encased in aluminum, for in craft brewing the future just might dwell in the can.