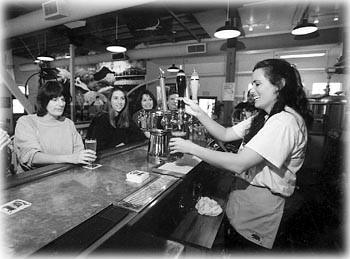 On Tap: Healdsburg’s Bear Republic Brewing Company is one of the newest brewpubs.

Beer
I HAVEN’T BEEN DRINKING beer long or hard enough to feel comfortable around it, but Bear Republic’s selection put me at my ease after a few sips. Their cream ale is perfect for a warm day when something with more kick and less pulp than lemonade is called for, while the Scottish-type Red Rocket Ale left a smoky afterburn that was curiously agreeable. The favorite at our table was the Hefe Weizen, a cloudy summer brew that is, in spite of the inexplicable crown of lemon, the anti-Corona: rich, wheaty, and faintly fruity. Our menu called it “banana and clove,” but I think there’s more to it than that. The sampler menu is a deal: 3-oz. servings for 50 cents.

Seasonal: Look for a few seasonal brews during the next few months, including the “Big Bear,” a real brute of a stout containing 8.6 percent alcohol, and a holiday spice brew promising touches of cinnamon and mace (that’s the spice, not the spray).

Take-out/Keg Availability: Premium cask-conditioned ale and special guest brews from other establishments are available, and all except the latter can be taken out by the 1-gallon ($16) and 5-gallon ($46) container, and by the half-barrel ($120).

Food
TO WARM OUR FINGERS between sampler glasses, we opted for the garlic cheese fries ($3.50) and shrimp pot stickers with cilantro pesto ($5.25). The fries were good and garlicky, but the pot stickers were a disappointment. Their beautiful crust concealed a pasty orange filling–carrot?–with a sneaky chili afterbite that almost completely obliterated the already scant texture and flavor of canned brine shrimp. The pesto was a murky green oil bath seething with the memory of more chilies; the bits of cilantro at the bottom of the cup never stood a chance. After these two pungent starters, my mouth begged for milk, not beer.

When it came to entrées, the basic items shone: The hearty Oktoberfest sausage dinner ($10.75), for example, was stellar, with sautéed cabbage that melted in the mouth. But when the nouvelle crept in–as in the potstickers or the Press, a bland chicken and bacon sandwich with a brie and caramelized onion base ($7.25)–it disappointed. Beet and chicken shepherd’s pie ($7.75)? I think not.

Service
THE SPOTTY MENU was mostly redeemed by great service. Our server was able to answer our many questions, delivered our food quickly, and managed to check in with us at least twice more during the course of our visit, in spite of ever-thickening crowds around the tables.

Ambiance
BEAR REPUBLIC has a spacious and easygoing decor, combining bike shirts and a boldly incongruous mural with industrial pipes and a casually elegant outdoor patio.

Din: The hubbub of talking creates the best ambiance, and Bear Republic sparkles in that respect: People seemed happy to be there together. If you like it louder, try a little later on some Saturday nights, when there’s a great lineup of music ranging from blues to reggae.

Restrooms: If the water sounds from a nearby fountain affect you in a certain way, you may run into trouble with the one-per-gender restroom availability. Fortunately, the restrooms are clean, serene, and entirely lacking in bubble gum-scented disinfectant. The women’s room even has a changing table, one of many clues that the place is family-friendly.

Non-drinkers: There are some wines and hard ciders to be had, while the completely abstemious might want to give the homemade sodas a shot. The cream soda is particularly recommended.

Flat
TURN DOWN the heat and the haute cuisine!
–M.W.