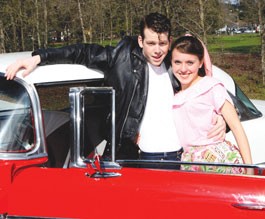 SRJC's 'Grease' returns the show to its basics

“I guess there’s just something about this show that seems to capture our collective psyche,” muses Laura Downing-Lee, who teaches acting at SRJC and is directing its upcoming production of Grease. When first approaching this raging, rock ‘n’ roll behemoth, Downing-Lee had to decide which version of Grease she wanted to perform. Grease has changed quite a bit since the show first appeared on Broadway in 1972, racking up a whopping 3,388 performances in its record-breaking nine-year run.

“There is a whole generation of people who grew up with the movie,” she explains. “They’ve never seen the play, and a lot of people are surprised at how different it is. For one thing, some of the best-loved songs in the movie were never in the play.”

These include “Sandy,” “Hopelessly Devoted to You” and (believe it or not) “You’re the One That I Love,” the movie-ending crowd-pleaser that pretty much defines the show. Downing-Lee eventually gained permission to put all of those songs into the SRJC version. According to Downing-Lee, the music in Grease is better than some people realize. “If you pay attention,” she argues, “the music in Grease is actually a series of spoofs of popular songs from the ’50s. Some are very broad satire and others are more low-key, but when you look at the play closely, you see that there is some very sophisticated commentary on the music of the late ’50s.

“This,” she continues, “was a very significant period in the evolution of rock ‘n’ roll music. So in Grease, while the songs themselves aren’t terribly sophisticated, the level of commentary they are making is very sophisticated. Either way, it’s a whole lot of fun!”