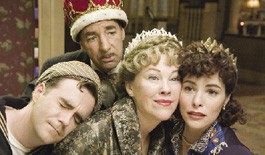 Fall films beckon us back to the theater

Looking over the film lineup for this fall, one can only say, “Fuck”–and that’s because that long-awaited title is finally almost before us on a big screen. Opening in November, Steve Anderson’s documentary on the most useful word in the English language offers opinions on the mot’s merit by everyone from Ron Jeremy to Pat Boone. What a pity so many theaters today are built without marquees.

But the fall schedule’s assortment of movies involves that most deletable of expletives even without Anderson. Kirby Dick’s documentary ‘This Film Has Not Yet Been Rated’ (Sept. 1) explains why that more-than-one little f-word can get your film shoved into NC-17 limbo. If ‘Fuck’ has buzz, ‘Buzz’ (due in November) has buzz, too. A. I. “Buzz” Bezzerides, was the Fresno-born author of trucker-lore films They Drive by Night and Thieves Highway. Still alive at 98, Bezzerides recalls his days in the more industrial parts of the film industry.

Speaking of film noir, ‘The Black Dahlia’ (Sept. 15) is Brian De Palma’s adaptation of James Elroy’s mystery novel, with Mia Kirshner as the title cadaver and Aaron Eckhart and Josh Hartnett as the two all-too-culpable cops on the case. ‘Hollywoodland’ (Sept. 8), like the Black Dahlia case, is based on a real-life mystery: the suicide, if a suicide it was, of George Reeves, TV’s Superman of the 1950s. Ben Affleck tries very hard to be Reeves, the unhappy boy-toy of a married woman (Diane Lane), and Bob Hoskins is excellent as a growling and very menacing MGM exec, the lady’s husband.

The new ‘Casino Royale’ (Nov. 17) makes it clear that Bond’s enemy is not the terrorist financier Le Chiffre (Mads Mikklesen), but a rogue agent named Jason Bourne, who has found favor with audiences by being a reluctant op without gadgets. After the sci-fi excess of Die Another Day, the new Bond is a “blunt instrument,” as M (Judi Dench) calls our hero. That means: expect as much pain as pleasure.

And espionage within the Boston PD is the subject of ‘The Departed’ (Oct. 6), Martin Scorsese’s remake of the thriller Infernal Affairs. By contrast, Clint Eastwood celebrates the cleaner moral lines of WW II in two separate movies about the combatants in the Pacific War: ‘Flags of Our Fathers’ (Oct. 20) and ‘Letters from Iwo Jima’ (the same story told from the Japanese side) coming out later this season.

Arty science fiction like ‘Children of Men’ (Sept. 29) is both promising and forbidding; the director is the inspired Alfonso Cuarón (Y Tu Mamá También), who is trying to bring a new slant to the old sci-fi plot about the last pregnant woman alive and how society wants her dead. ‘The Fountain’ (Nov. 13) is the speculative-fiction movie to look forward to, a tri-part story set in the age of the Conquistadors, in our time and in the 26th century–three eras united by a search for the fountain of youth. Hugh Jackman stars in three roles; Rachel Weisz is the woman he loves for an eon, and the visionary Darren Aronofsky (Pi) is the director.

‘The Science of Sleep’ (Sept. 22) is the new Michel Gondry (Eternal Sunshine of the Spotless Mind) film about the dormant life of a Parisian (Gael Garcia Bernal) haunted by the sultry charms of his next-door neighbor (Charlotte Gainsbourg). If The Science of Sleep turns out to have Oscar-worthiness, the behind-the-scenes campaign should be worthy of the new Christopher Guest film, ‘For Your Consideration’ (Nov. 17). Makers of an anemic indie picture are bewitched by the lure of Oscar, which contributes to friction, star fits and hurt feelings. The cast includes regular Guest stars Harry Shearer, Fred Willard, Eugene Levy and Catherine O’Hara.

‘The Last King of Scotland’ (Sept. 27) isn’t the sequel to Braveheart; Kevin Macdonald (of the superb doc Touching the Void) made his first fictional film about the court of the madman Ugandan dictator Idi Amin (Forest Whittaker), as seen through the view of his fictional Scottish personal physician, Garrigan (James McAvoy).

On the subject of charming fascists, ‘All the King’s Men (Sept. 22) features the overactor’s overactor Sean Penn as Willie Stark, Robert Penn Warren’s version of Louisiana governor Huey Long. Wonder if Penn will try to point this thing at a certain Southern populist called W.?

‘Fast Food Nation’ (Oct. 20) is already quite pointed. Greg Kinnear is an exec at the home of the “Big One,” but director Richard Linklater works his way down the fast-food chain to Mickey-jobbing teens and Central American illegals caught in the literal meat grinder. It’s based on Eric Schlosser’s nonfiction bestseller.

‘The U.S. vs. John Lennon’ (Sept. 19) is David Leaf and John Scheinfeld account of the government’s campaign to monitor Lennon during his years as an antiwar activist; we can presume that’s supposed to reflect today’s turbulence. And Alejandro Inarritu’s international drama ‘Babel’ (Oct. 27), starring Brad Pitt and Cate Blanchett, may prove that violence is one of the only ways we can all understand one another.

The Iraq debacle is the background of ‘My Country, My Country’ (Sept. 8), Laura Poitras’s documentary profile on Sunni politician and physician Dr. Riyadh al-Adhadh, who is fighting his own battle to save the nation as well as his patients. ‘The Ground Truth’ (Sept. 15) by Patricia Foulkrod is a documentary about American soldiers returned from Iraq who face their own pain and public misunderstanding. Somehow, the film has lost its provocative suffix–After the Killing Stops–subsequent to this year’s Sundance Festival.

Expect the dailies and the magazines to focus more on computer animation, every studio’s dream of a quick payoff. This fall: ‘Everyone’s Hero’ (Sept. 15), about a little boy in search of Babe Ruth’s stolen bat. ‘Open Season’ (Sept. 29) concerns a grizzly bear (Martin Lawrence) who odd-couples it with a mule deer (Ashton Kutcher). ‘Happy Feet’ (Nov. 17) is for people who’d rather have penguin than turkey for Thanksgiving; George Miller (who foaled the Babe series) directed this charmer about an emperor penguin chick who learns to tap-dance.

The most promising is the DreamWorks/Aardman collaboration ‘Flushed Away’ (Nov. 3), a grotty London variation on the story of the country mouse and the city rat. A posh pet (Hugh Jackman again!) tries to flush a rough-trade interloper named Sid and ends up down in the sewers himself. Lastly, Rocky VI arrives concealed under the title ‘Rocky Balboa’ (Dec. 22). The pug may still have some fight left in him, but the rest of us are a little beat.