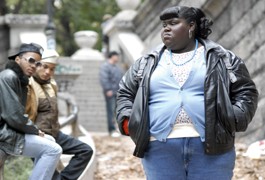 Precious (Gabourey Sidibe) is a child with child who struggles to succeed.

The opener at the Mill Valley Film Festival, presented by Oprah Winfrey and Tyler Perry, is the film Precious, which opens the fest on Oct. 8. Clareece, known as “Precious” (Gabourey Sidibe), is an unloved Harlem child who has been serially raped by her father, resulting in one birth; she’s pregnant with another child. The first has Down’s syndrome, so she calls him Mongo, short for “mongoloid.” Clareece’s mother (Mo’Nique) despises her and wants her to get down to the welfare office and get signed up, instead of striving for a high school diploma. Meanwhile, at an each-one, teach-one alternative school, Clareece is learning to write her own story.

The author Sapphire, whose book Push is the basis for Precious, has said that the character of Clareece is a composite, made from the girls she was teaching in the Bronx and Harlem. Maybe it’s the compositing process that’s the trouble, as per the rule about lightning. True, Precious has been knocking people’s guts out in the film festival circuit, at Sundance and Toronto. Director Lee Daniels previously made the oddball hit-man movie Shadowboxer.

In Daniels’ earlier film, the director found something exciting in Mo’Nique, and he gives her some extra room to act in Precious. The Oscar-bound entertainer has a very plausible monologue about why she lets her daughter suffer. She asks not to be judged. But Precious has a judgmental streak that won’t quit, and that’s the part that attracted Perry and Winfrey. By the end of the movie, you know who all the heroes and all the villains are, and you can go home comfortable.

Other MVFF evenings worth getting excited about include the appearances by Uma Thurman (Oct. 10) and Coraline’s Henry Selick (Oct. 11), as well as Lone Scherfig’s bleak ’60s England in An Education (Oct. 9) and André Téchiné’s generational head-scratcher, co-starring Catherine Deneuve, The Girl on the Train (Oct. 15).

I fancied two more manly-men films less, even if they do constitute counterprogramming to Precious. The Boys Are Back (part of the opening-night gala Oct. 8) brings Clive Owen to town. After his wife suddenly dies, Joe Warr is determined to let his boy children run amuck. Director Scott Hicks (Shine) gilds up the South Australia beachscapes, but the movie itself can’t escape the sitcom mawkishness of the premise, no matter how much restrained sensitivity the miscast Owen radiates.

The Road (Oct. 8) has more literary prestige, but it’s strictly for people who adored the book—an exploitation movie ghosted by the authors of the King James Bible. Cormac McCarthy’s tale of ogres jumping out of the underbrush is so much like last week’s zombie movie that the producers can be forgiven for advertising it just like a gut muncher (for Thanksgiving, yet).

An inexplicable happenstance (sunspots? nuclear war? the liberal media?) seems to be a vast crisis of global decency. Afterward, some men carry the internal fire of progress, and most others just turn into dirty carnivorous hillbillies.

It’s clear either way: women don’t “carry the fire,” being weaker vessels, though the sturdy Viggo Mortensen doesn’t need dames in his life anyway, when he’s got a son to single-parent. The last straw in The Road was the apocalyptic product placements for Coca-Cola and Jack Daniels—not that we all won’t need a drink on the day after the world ends.