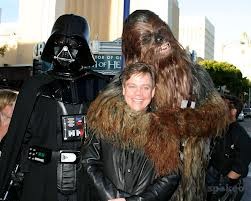 Aug. 4: Mark Hamill and the San Francisco Symphony at the Green Music Center

What do Luke Skywalker and the San Francisco Symphony have in common? Not much, until now! Mark Hamill, who played the famous Star Wars hero that got with his sister, hosts the symphony in a concert featuring music from the movies. Get excited to hear the themes from popular movies, such as Titanic, Batman and Jurassic Park, as well as scores from classics including Psycho, Superman and Star Trek. With conductor Sarah Hicks leading and Mark Hamill slaying the rebel forces with his light saber (just kidding, he won’t be doing that), the experience is sure to be more fun than an X-Wing fighter on Sunday, Aug. 4, at Green Music Center. 1801 East Cotati Ave, Rohnert Park. $25—$100. 4pm. 866.955.6040.